Bats in the News - ﻿WNS Survivors Face a New Risk


Some hibernating bats emerge from a wintertime exposure to White-nose Syndrome with few symptoms of the devastating disease that has killed more than 5.7 million bats in North America. Then, just as they are recovering from the infection, they seem to be attacked by their own immune systems, the U.S. Geological Survey said in a news release.

Researcher Carol Meteyer, of the USGS, and colleagues suggest that these bats show evidence of "immune reconstitution inflammatory syndrome" (IRIS) – a condition first described in HIV-AIDS patients. This hypothesis, proposed in the journal Virulence, represents the first natural occurrence of IRIS ever reported. "For both humans and bats, IRIS can be fatal," the agency said.

Meteyer's co-authors are Daniel Barber and Judith Mandl at the National Institute of Allergy and Infectious Diseases.
With IRIS, after an organism's immune system has been suppressed for a time then reactivates, it can detect an infection and "go into overdrive, resulting in severe inflammation and tissue damage in infected areas," the scientists said.

"The potential discovery of IRIS in bats infected with White-nose Syndrome is incredibly significant in terms of understanding both the reasons for bat mortality and basic immune response," said USGS Director Marcia McNutt. "This discovery could also prove significant for studies on treatment for AIDS."

In AIDS patients, the immune system is suppressed as the HIV virus attacks white blood cells. It is reactivated through antiretroviral therapy. But in patients with secondary infections, the renewed immune system overacts and can cause major damage to healthy tissue.

Bats' immune-system activity (along with body temperature and metabolism) is dramatically reduced to conserve energy during hibernation. This allows the Geomyces destructans fungus, which causes WNS, to invade the bat's muzzle, ears and wings.

"Animals that survive WNS often "emerge from hibernation with normal-looking wings," Science News said in a report on the research. "But as their body temperature warms back up and their immune systems reactivate, their health takes a nosedive. Within days, dark patches riddle their wings. ... Over the next two weeks, these and other immune cells encapsulate the fungal patches, walling them inside scablike structures. Soon the scabs fall away, leaving the wings with huge holes. Flight becomes limited, if not impossible."
"It's cellular suicide. It comes out in a huge wave, going out to those areas of infection and killing everything," Meteyer told The Washington Post.

"We see strong similarities between human IRIS and the pathology associated with WNS," she said in the news release. "We hope that these findings will stimulate more experimental studies that yield insight into the role of the immune response during IRIS in humans as well as hibernating bats."
Posted by Ellen Rathbone at 12:14 PM No comments:

Look!  It's the first day of Winter and we FINALLY
have some snow!!! 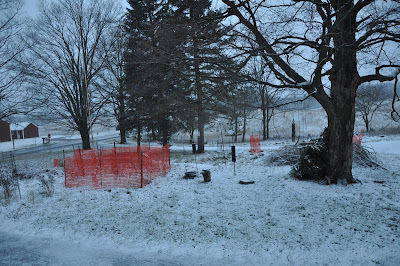 This was our morning walk this AM - the wind was blowing, the snow was horizontal, but it was snow and that's all that counts in the end.  Huzzah! 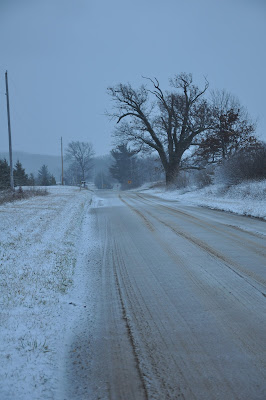 Meanwhile, in the house, I finally got an extension cord for the tree and for the first time my tree was lit.  In fact, this is the first tree I have ever had on my own.  The bulk of the tree is still outdoors, where it's providing shelter for the birds (in fact, you can see it leaning against the maple tree in the first photo). 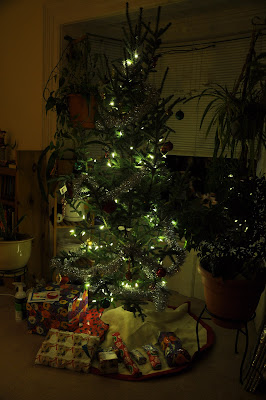 Have a Cool Yule, Everyone! 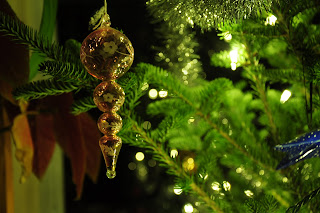 Posted by Ellen Rathbone at 9:08 AM 4 comments: 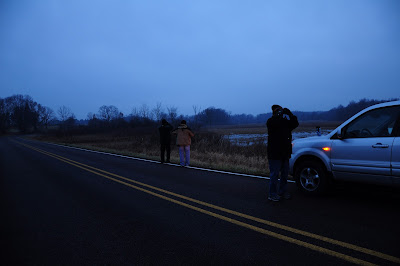 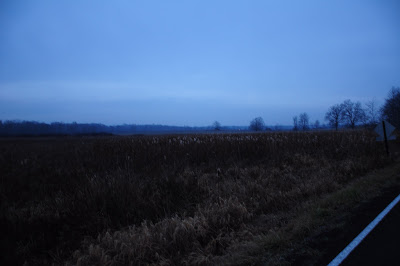 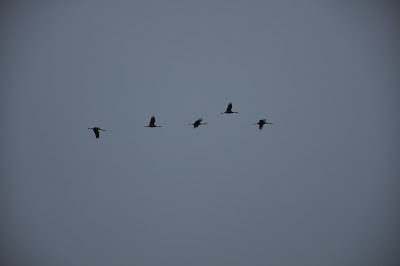 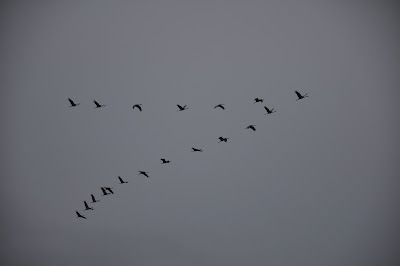 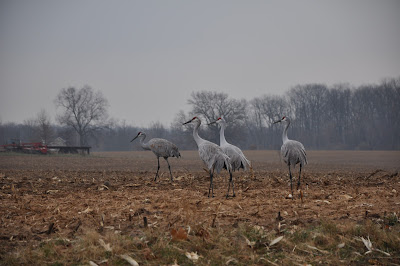 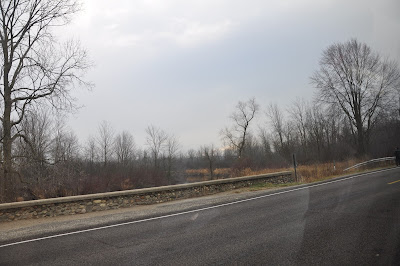 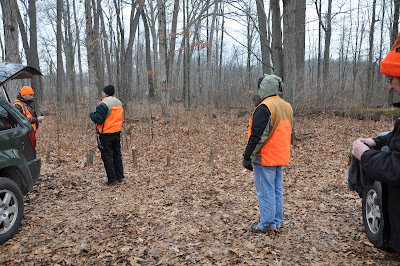 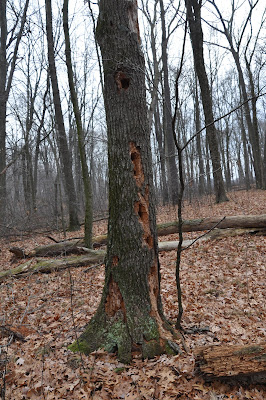 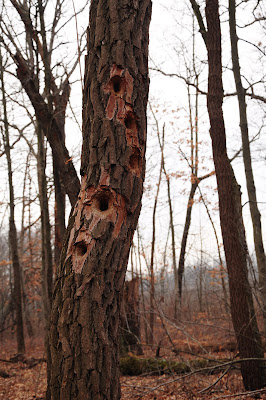 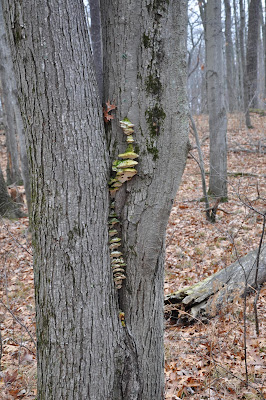 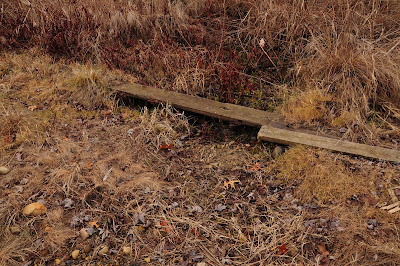 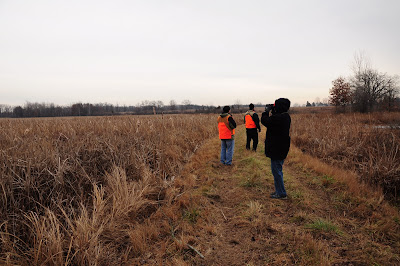 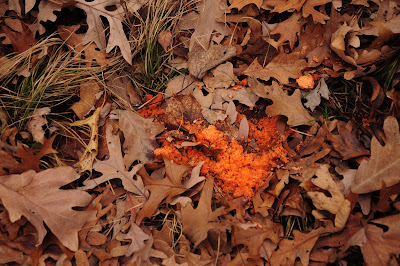 Still, it was a good day in good company - and as long as I had a blanket for my legs, I was happy.  I can think of much worse ways to spend an anniversary.
Posted by Ellen Rathbone at 2:54 PM 1 comment:

It was a brisk 20- or 30-something last night when I got home from a small Christmas Party at the house of one of our board members at work.  I was more concerned about getting home in time to let the dog out before he made a mess indoors, than I was about paying attention to the sky.

When I walked in the door, Toby rushed downstairs as if to say "at last!" and danced around, eager to get out to relieve himself.  It was nearly 9 PM, after all, and I'd been gone over 12 hours.  He peed, then ate, and we went for our walk.

What a beautiful night.  The sky was dark (no moon), despite all the light pollution (neighbors and neighboring cities), and Orion and Saturn were bright up above. 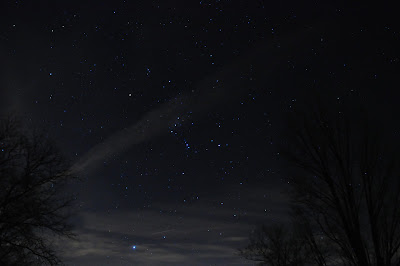 In the image above, you see Orion in the center,
with Sirius (really bright blue star at the bottom)
just coming over the horizon.
Saturn is just out of range off the top of the photo.

As we made the loop back toward the house, I saw not one, but two meteors streak across the sky out of Orion's feet.  A few minutes later, a third streak rushed across the sky.  Rumor had it that we might see up to 60 meteors this night, so I figured a little night time photography was ahead of me.

We got home and I dug out the camera, tripod, and remote cable release.  I got things assembled and we went out into the back yard, where the worst of the neighbors' lights were blocked by the house.  I set up the tripod and started shooting - leaving the shutter open for 5-20 second intervals (playing around with the ISO), hoping a meteor would streak across the sky while it was open.  Five or six did, but as bright as two or three of them were, the camera didn't register most of them.

Here's the one shot that worked: 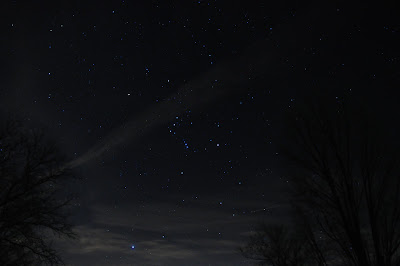 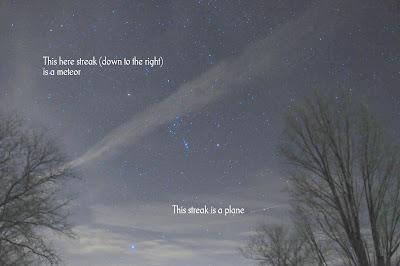 Same image, lightened so the streak(s) show up.


Tonight's meteor shower, or drizzle, as it turned out for me, had two possible origins.  The first was the Geminid Meteor Showers.  I did a little research on these, and it turns out that they are a fairly new occurrence in our skies.  Most of our meteor showers have been around for hundreds, if not thousands of years, but the Geminids only appeared in our skies about 150 years ago.  They occur when our planet passes through the orbit of an asteroid we call 3200 Phaethon.  The meteors are bits of debris (some no bigger than a grain of sand) burning up as they pass through our atmosphere.

The other potential source, new this year only, is the tail of debris cast off by the comet 45P/Wirtanen.  Apparently Earth is passing through this tail at approximately the same time it's going through the asteroid's orbit.  So, in theory, there could be two meteor showers happening at the same time!

Now, I was out there about 10:00-11:00 PM (-ish).  The experts were saying that the best show (the most meteors) would be between midnight and 3:00 AM.  Well, I didn't think I was going to be awake at that time, but lo! and behold! I was.  It was about 12:30 when I grabbed the camera set-up again and headed back into the yard, thoroughly bundled up (standing still for an hour or so in a frosty yard at midnight in December is a chilly prospect).  I positioned the tripod where the other neighbor's light was mostly blocked and looked up at the sky.  Where were all the stars?  It seemed a high fog had moved in, rendering the view unusable.  What few stars I could see were all hazy and blurry.  No good.  The good news, though, was that I could go back inside and get some sleep knowing I probably wasn't going to miss much.
Posted by Ellen Rathbone at 11:58 AM 2 comments:

Email ThisBlogThis!Share to TwitterShare to FacebookShare to Pinterest
Labels: stars


Posted by Ellen Rathbone at 3:30 PM No comments: