This morning the other half of yesterday's school group arrived for their chance at uncovering the diversity and abundance of wildlife off our trails. This group really took their time and looked. We had some great discoveries, including one boy who, thanks to hunting trips with his dad, found deer tracks pressed into the wet leaves in the mixed woods! That takes a practiced eye. And even though we passed through the same habitats as yesterday's group, we found plenty of new things to record. Some lent themselves well to photography, while others were too mobile to allow me a clear shot. 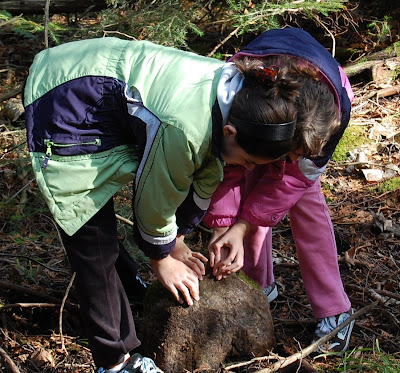 Girls looking under rocks. That's actually the title of a book, I believe. Anyway, some of the girls were a little squeamish about touching stuff, and some were taken aback by the aromas that issued from underneath rocks partially buried in swampish muck. New doors were opened for them. By the end of the program, even the most fashion-conscious of them expressed an interest in exploring their own yards back home. Another success story. 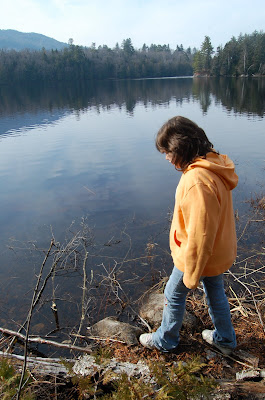 The image of this girl in the wetland along the shore of Rich Lake was just too good to pass up. She was one of our most engaged students today. She told me how much she loves being outside and how spending time exploring sure beat playing video games indoors. This was music to my ears! 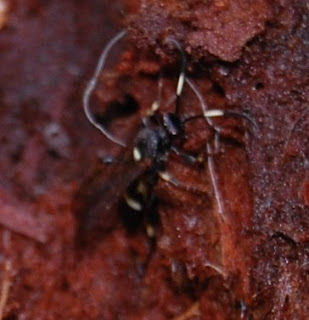 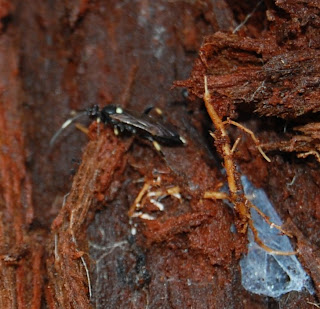 I apologize for the quality of these shots - the beast just wouldn't stand still! I believe it is some kind of wasp, but I'm not 100% sure. What was fascinating to us was its coloration: dark with white/cream-colored stripes/bands on antennae, legs and body, including what I think was a white/cream-colored stinger. If anyone has an idea of what it might be, please let me know. 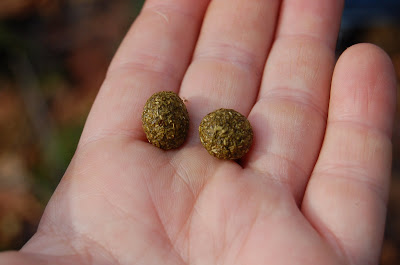 Snowshoe hare scats! I was very excited to find these. We are lucky to find hare tracks once in a while during the winter, but this is the first evidence I've had of their presence outside of winter. The girls were somewhat less enthused with the discovery, and were especially appalled when I picked the scats up to show them up close. Oh, well...what can I say? I guess I'm just a scat fanatic!

On a side note: many thanks to those of you who have left me comments and who visit my blog on a regular basis! It's always nice to hear that one's efforts are appreciated!

I encourage everyone to take some time these next few days while the weather remains mild to go out and explore the late-autumn woods. Or even the late-autumn yard! It can be a real eye opener to discover that many animals are still active, hording food, grabbing last-minute morsels to see them through the winter, and foraging among the seed heads in gardens and berry-laden shrubs in wetlands and yards alike.
Posted by Ellen Rathbone at 2:20 PM