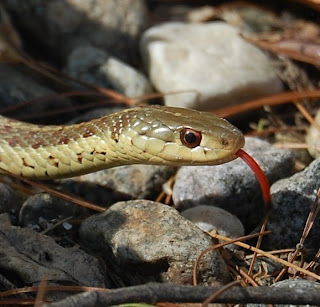 I stumbled across my first snake of the season this morning as I was taking down the VIC's hummingbird feeders for a cleaning. This very handsome garter snake (Thamnophis sirtalis) sunning itself on the stones by the garden. I rushed inside for the camera, and fortunately the snake obliged me with a good photo shoot. My goal was a shot with the tongue flicking in and out, and I was able to get several!
When you think about it, snakes are truly amazing animals. First off, they have no legs, and yet they are able to get around the world with very little difficulty by simply using muscular contractions (we should all have such great abdominal muscles) and their scales. They can even climb trees!

Then you have their senses. Snakes have no ears to speak of, nor do they have ear drums. So how in the world do they hear things? Apparently, they have what is called bone conductive hearing, which means, in the snakes' case, that they feel vibrations through their lower jaws (and sound, as we all know, is essentially vibrations). This was discovered through the study of the physics of boat movement through water. A boat (or ship) moves in multiple (up to six) directions all at the same time. A snake's lower jaw, which is actually two separately articulating pieces, can do the same thing. Vibrations reach the jaw and travel along it to a cochlear mechanism (inner ear) where they become electrical signals that are shunted along to the brain, which then tells the snake, "Wow! Did you hear that?"

AND...just to make it even more interesting, because each side of the lower jaw moves separately (have you ever watched footage of a snake swallowing an egg and seen the lower jaw essentially walk over the egg?), the vibrations travel to two separate cochlear mechanisms, and voila! you have stereo hearing. How cool is that

Let's move on to the sense of smell. In the photo above, our friend the snake is flicking out its lovely red tongue with the black forked tip. What it's doing is sampling the air. As the tongue flicks about, it's picking up scent particles in the air. After the tongue disappears back into the snake's mouth, the forked tip fits into the openings of the Jacobson's Organ, located in the roof of the mouth. This organ captures those scent particles and sends a signal to the brain, which then tells the snake, "Hey - that's a mouse! Dinner!" or "Nothing here, keep going."

Snakes do not have eyelids. This is something that some folks focus on as a creepy thing about snakes: they don't blink. I choose to look at it like this: snakes have a protective scale over their eyes and if you find a shed snake skin, you can see this scale. They don't need eyelids. It's pretty neat.

Most of all, I love the way snakes feel. They are not wet and slimy - they are dry and soft and feel sort of like a basketball.

All in all, snakes are fascinating animals, and if you look closely, you will see a snake always looks like it's smiling. And why not - snakes are immensely beneficial animals, at least in our part of the world. Thanks to snakes we are not over-run with rodents.
Posted by Ellen Rathbone at 9:28 AM