Not All at the Feeders are Feathered

Last week my new friends at work decided to put a set of bird feeders up outside "my" window, which faces a small man-made pond. It didn't take long for the birds to find the feast, but they aren't the only ones.

The fox squirrels put on a good show yesterday. Carrie had hung some peanut butter and seed coated pine cones in the tree, and they are irresistible to squirrels. 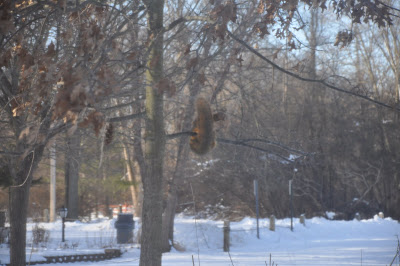 Round and round we go. 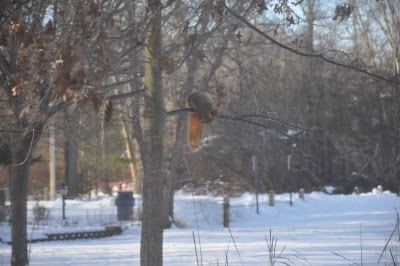 Until the competition shows up. The original squirrel decided jumping from the branch was the greater part of valor, 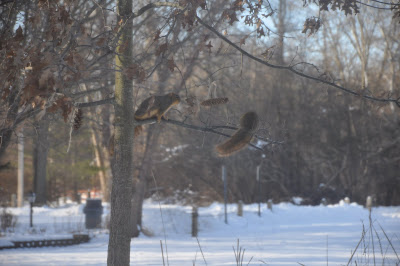 leaving the spoils to the challenger, who bit the cone loose and ran off with it sticking out of his mouth like a giant cigar. 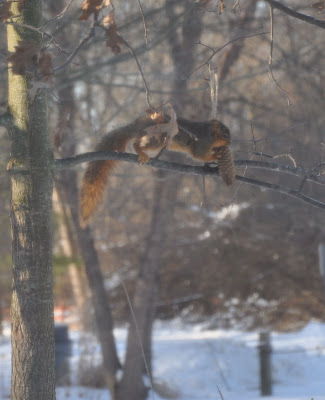 This afternoon, however, as Carrie and I were sorting through some old exhibit files, I looked up and saw something even more exciting. "There's a 'possum at the feeders," said I. 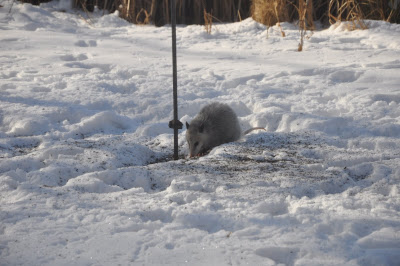 We both ran for our cameras, for opossums are not really diurnal animals. They prefer the extra cover a little darkness provides. But not this one, apparently. Not only was it not night, it wasn't even overcast! I guess some tasty sunflower seeds are good at any time of day. Just look at those stuffed cheeks: 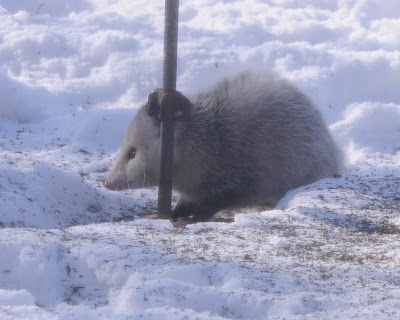 Even the most devout disliker of opossums has got to admit that there are times they are just plain cute.

I have a little past history with opossums. My first experience was with a couple rehabbed baby 'possums. The rehabber had brought them to the property to return them to the wild and I tagged along. They were small, but full of teeth in those mouths that open abnormally wide. Opossums have the greatest number of teeth of any mammal, so it is very impressive when they open wide to scare off predators. Marylou tried to get them to cling to a tree, so they'd be safe after we left, but they insisted on being uncooperative. So, we left them on the ground, "playing dead."

Opossums don't really "play dead." It turns out that they actually faint - a physiological response to stress. Of course, it doesn't always work to the animals' advantage - note the number of 'possums permanently sleeping on roads.

Later in my career, I got some good hands on experience with a large opossum that was part of the education collection at the zoo where I worked. She mostly just wanted to sleep, so she was very docile.

Back to our friend at the bird feeders, who was totally focused on food. That is until Carrie tried to sneak up on it for a better shot. She went out the side door and peeked around the corner of the building. The little 'possum stopped munching and froze. It's little nose lifted, sniffing the air in her general direction. 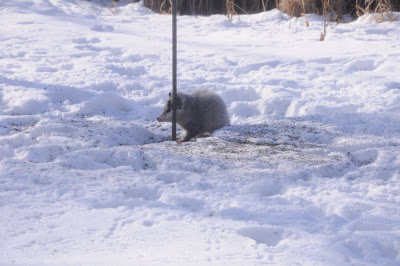 Finally her presence became just too much, and the 'possum beat a slow retreat. 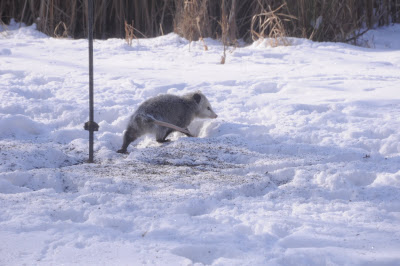 It obviously did not want to go wading back through that cold snow. Opossums are simply not designed for cold weather. Their naked feet, tails and ears can take a real beating in the winter, freezing, turning black, and falling off. Frostbite is a serious reality for these funny-looking marsupials. 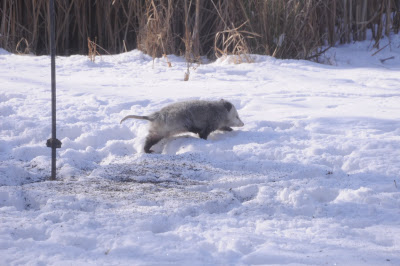 Once in the snow, however, the 'possum picked up speed and disappeared under the pond's little deck. 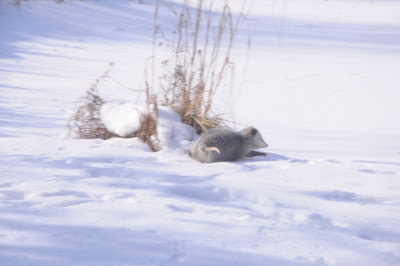 Since both of us are avid trackers, Carrie and I went out to get a good look at the footprints left behind. Opossums have funny feet, with "thumbs" sticking out the side, distinguishing them from any other track in the woods (or fields). 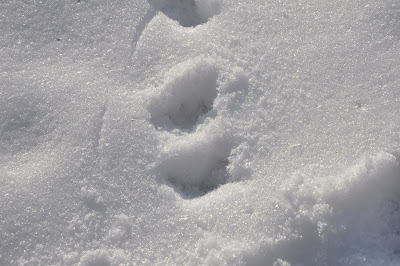 There were enough tracks out there to suggest this was not the first trip this 'possum has made to the feeders. We expect to see it out there again.
Posted by Ellen Rathbone at 7:04 PM