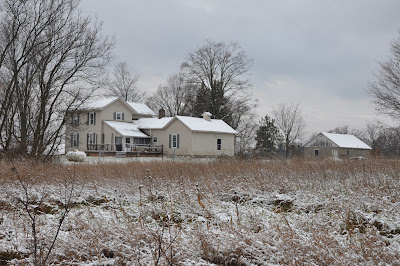 Okay, so it wasn't terribly snowy, but snowy enough to make things white.  Toby always has to sample the snow.  I keep telling him it's not really good until February, but he insists on forming his own opinion. 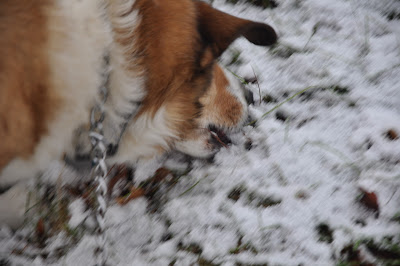 By afternoon the snow had melted away, but it was lovely while it lasted. 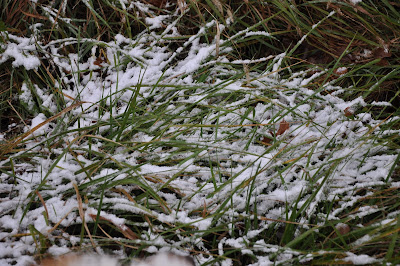 By the weekend the temps had soared back into the 60s.  I have some time off coming to me at work, so I stayed home Saturday to take advantage of the balmy weather and attack the remaining woody invasives in my yard:  honeysuckles. 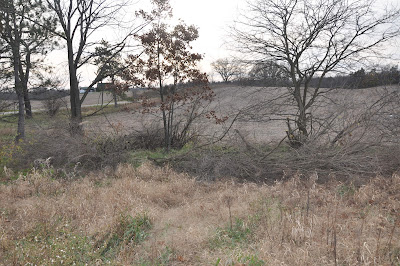 Armed with a bowsaw, a set of loppers, a bottle of concentrated RoundUp and a paintbrush, I sallied forth and had at it. 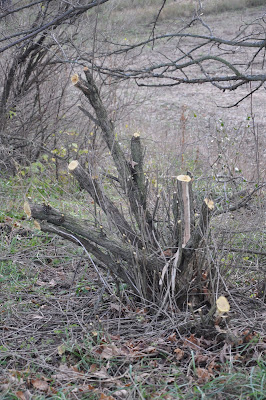 Before long I was left with several piles of trunks and branches, and had my fingers crossed that the freshly painted stumps would not sprout come spring 2012. 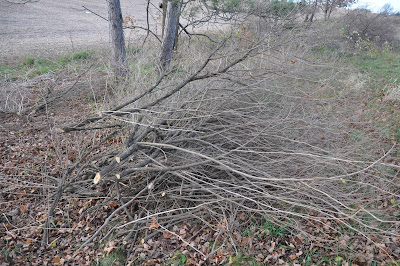 This morning I was very pleased to find that juncos and sparrows (I don't know which ones) had already taken possession of the new brush piles (you can just see a junco to the left of center in the photo below - they all flew away when I came back out with my camera). Brush piles are highly underrated by homeowners.  I suspect it is because most people are rather obsessed with The Perfect Tidy Lawn.  Not me - give me a messy yard any day.  I let the grass grow, I plant trees and shrubs in random locations, and I will probably leave these piles of brush lying about.  They make terrific cover for small birds, who will flitter and flutter in and out of them in search of food and shelter.  I may even move a pile over near the birdfeeders.  I just hope the branches don't resprout (like the honeysuckle branches did back at my house in Newcomb). 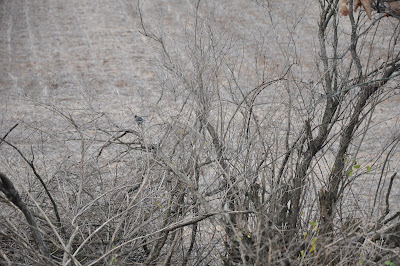 As I was sawing and lopping my way thru the tangle, I discovered some stout stems growing among the shrubbery and trees.  One thing stood out on these stems:  the large, white leaf scars. 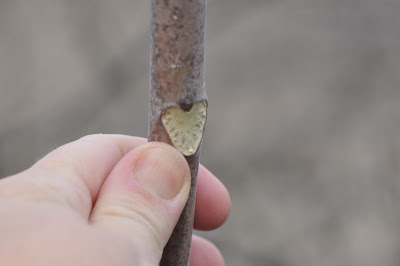 I knew this leaf scar.  It was familiar.  I wracked my brain trying to remember which species it belonged to. Ash?  Walnut?   The phrase "monkey faced leaf scar" kept teasing me.  It was one we used in my dendrology class, oh these many years ago, to remember the species.  Grrrr!  It was dancing around the edges of my memory and I just couldn't come up with a definite answer, although I was leaning towards the walnuts. 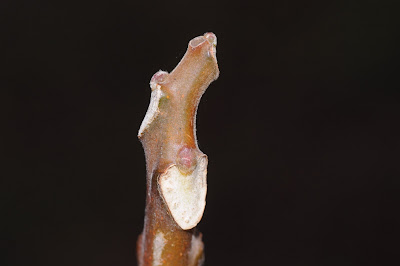 There were two reasons for this.  One:  there are a LOT of black walnuts around.  A LOT.  And two:  the ashes have been pretty much wiped out by the emerald ash borer here in Michigan.

I grabbed my copy of Harlow's Fruit and Twig Key and thumbed through it. No luck.

As I sit here at my desk, now, with various books littering the surface around me, I find myself still stumped.  The one clue I need I don't have - a sample of the pith!  This requires cutting off a twig and splitting it open to see the middle.  The stems don't have any branches, so I am reluctant to cut, for I'd have to take the terminal end of the entire plant, and I don't want to do that.

Moving on, we next look at the bundle scars - the bits/spots inside the leaf scar.  If this were one of the walnuts, there would be three bundle scars, one in each lobe of the leaf scar, and they would be rather horseshoe-shaped (making the scar look like a monkey's face).  These are not - they dot the leaf scar all around the curved edge.  Therefore, not a walnut.

Finally, as a last resort, I Google "walnut leaf scar" and look at images.  There it is!  I open the image and take a closer look.  Alianthus altissima - tree-of-heaven.  Invasive species!  I've never seen one of these.  The leaf scar is the right shape, the bundle scars are in the right locations, and it sports a solitary bud at the top of each leaf scar.

So now I have to know what this tree looks like.  I Google it and there it is.  It looks like a sumac.  Could it be that all these trees along the roadside that I thought were sumacs are actually Alianthus?  Knowing how invasive this species is, it wouldn't surprise me.

I just popped over to Gary's office and we looked it up in his handbook of invasive plants, and there it is - a perfect match for my photo above.  Looks like I've got a few more stems to cut and dab when I get home.
Posted by Ellen Rathbone at 2:11 PM