Walk Around the "Block"

A couple weeks ago Toby and I woke to a lovely sunny morning, and since it was my day off, we went for a 2.5 mile walk around "the block."  This section of real estate includes rural houses, state hunting land, and a bit of farming.
When we first headed out, and were cutting across the yard, the neighbor's dog, Nino, came bounding across the road, yapping away, to greet us.  Nino is very keen on Toby, but won't let me anywhere near him.  A very nervous little dog. 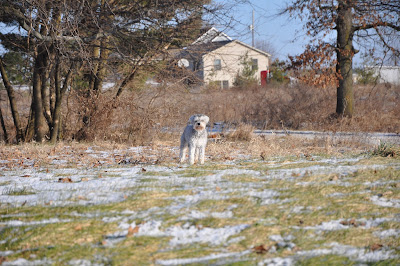 Soon we were beyond the houses and McMansions and walking along the dirt road, with state land to either side.  Normally I'd be very excited about all this state land, but it's not like the Adirondacks, where there are trails and hidden wonders to discover.  Mostly this land is forested and full of invasive species, and it's primary purpose is for hunting. 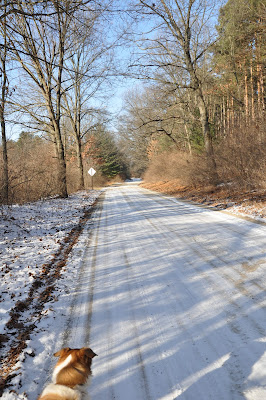 Even in the summer, when hunting is pretty much not happening, I'm not going to be wandering these lands because the numbers of ticks are simply unbelievable.  Michigan is home to 20 species of ticks.  Twenty!  About five of these are of concern:  the black-legged (formerly known as the deer tick), the American dog tick (aka: wood tick), the lone star tick (not strictly a Texan, despite the name), the woodchuck tick and the brown dog tick.  That's two dog ticks!  Toby and I are steering clear of tall grasses during the warm weather. 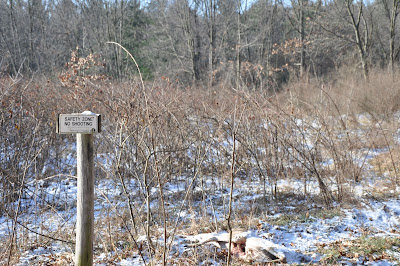 I may have posted a photo of this place (below) this summer.  I'm not sure what it is, but it does have "refinery" written on it. Last night when I was driving home, I saw a raging fire about two miles down the road from my house.  The structure was behind a lot of trees and several hundred yards from the road, so I couldn't get a good look, but it appeared to me like I could see a door that was ajar and the whole downstairs glowing from the fire.  "Upstairs" large gouts of flame were spewing forth, perhaps from a window, or a chimney, or a hole in the roof.  After knocking on doors and getting no response, I found a driveway that went toward the inferno, and two truck were driving out.  I stopped and asked if there was a house on fire - I was ready to dial 911 for help.  The man told me it was an oil refinery and they were just burning off whatever it is they burn off at such places - nothing to worry about.  There are a lot of small oil wells all around this area where I've purchased my home.  I wonder now if this structure below was another oil refinery - the green "chimney" certainly suggests this might be so.  Do they also have fires burning off "stuff?" 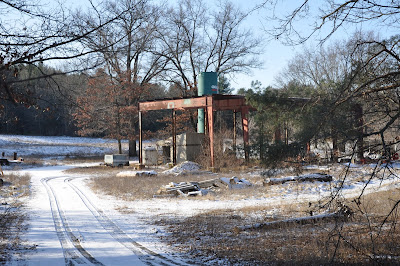 Tracking is pretty poor around here.  No fishers, no martens.  We do have coyotes - I've heard them calling.  Maybe I'll see some tracks once we get some real snow.  And weasels and foxes.  About the only tracks I've encountered so far, though, are dog, deer and rabbit (see below).  How small cottontail rabbit tracks look after ten years of following snowshoe hares! 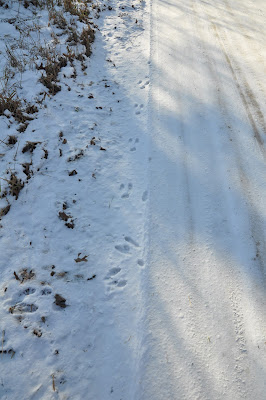 I'm not sure what this gated road leads to.  It looks like it should be a ranch somewhere out west.  We do have a number of farms around here - mostly soybeans and corn.  I've seen homes with sheep (not quite farms - just small holdings), and one place down the road from me has a handful each of Holsteins and pigs.  A few places have chickens.  It's certainly not dairy country like where I grew up.  Oh, and there are horses - quite a number of horses.  Up in the Waterloo area, just north of me, we have the upper crust horses that are attached to the country club and go on fox hunts, but down here we have rural horses, most likely family pets. 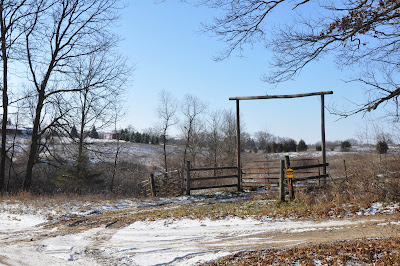 This part of Michigan is just starting to get bits of elevation - here we have a genuine hill!  Mostly, however, things are pretty flat here. 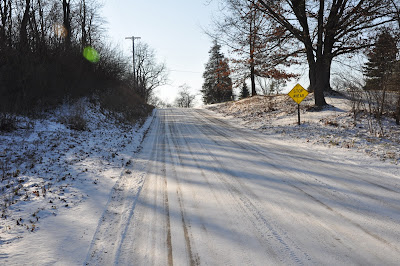 And, as we come down the home stretch, we see the source of the tree-of-heaven saplings found on my property:  full-grown trees on state land. 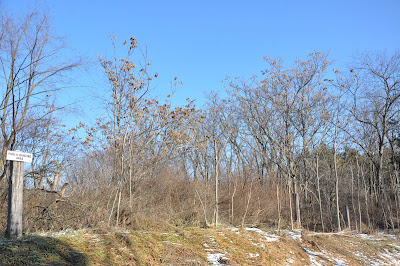 It's no wonder they are such prolific spreaders - just look at the amount of seeds still clinging to the upper branches!  I wonder if anyone would really object if I girdled these trees.  Hm.  I guess that since they are on state land I probably shouldn't - but it sure would be tempting! 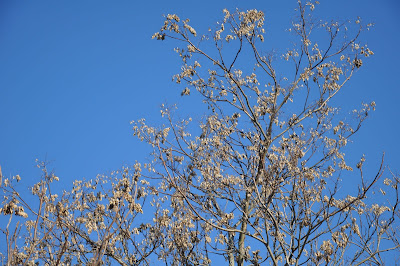 All too soon we were back home.
Posted by Ellen Rathbone at 9:34 AM

Email ThisBlogThis!Share to TwitterShare to FacebookShare to Pinterest
Labels: landscape