Every Tuesday afternoon during the school year, you can probably find me at the local middle school leading a group of kids in a nature program of some sort.

Last week I decided we were going to make a nature movie, and today we started filming.  It's an adventure, at times quite amusing.

One boy broke apart a log and two or three of the other kids were quite excited about their finds...until the first boy discovered the ants crawling on him.  He ran off trying to wipe ants (real and imaginary) off himself.

But what had captured the attention of most of us was this thing: 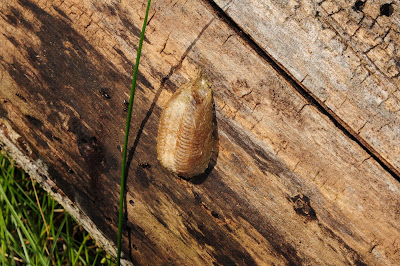 They all thought it was slimy, but in fact it was quite hard.  It looked vaguely familiar, so when I got back to work I looked it up in my Tracks and Signs of Insects book - it's a mantis egg case.  Based on the size (a bit over an inch long) and shape, I'm thinking it's the European mantis, Mantis religiosa.  It hadn't been parasitized yet, so I am sorely tempted to go back and collect it and hatch those babies out here.

The last time I saw a mantis egg case was in the early '90s when I was working in NJ.  I didn't know what it was, so I brought it in and placed it in a container next to my desk.  That was in the winter, and I promptly forgot about it until spring when one morning I came into my office and the window screen next to my desk was was crawling with hundreds of itty bitty praying mantises.  I'd like to see that again - with a camera ready!
Posted by Ellen Rathbone at 5:39 PM