Welcome to a cold and blustery day in central Michigan.  It was Saturday, and we were just outside Flint, where one of the members of the Barony of Cynnabar Shire of Stormvale was hosting an archery shoot:  Reign of Arrows.  We arrived about 10:00 AM and the clouds arrived with us...never quite departing. 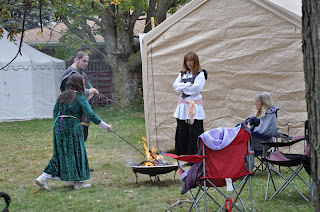 But it was time to get warmed up to shoot.  Bows had to be strung... 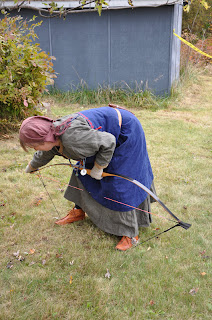 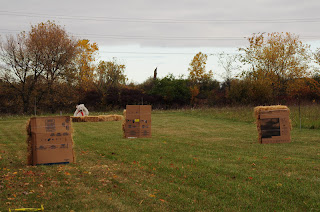 and soon we were on the line, stretching our strings and sending arrows down-range into targets (and the grass). 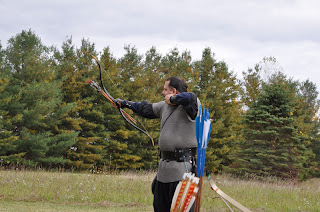 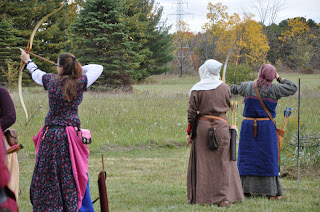 At these shoots, there are targets at 20, 30 and 40 yards, the usual fare.  Additional targets can be almost anything else.  In this case, about, oh, 75 or more yards down range was a "clout shoot" - which today was a large bear behind some bales of hay. 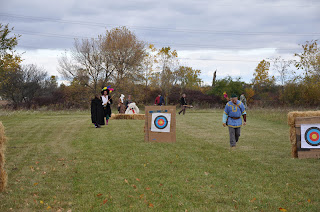 Anyone who can get their arrows within the boundaries of the hay bales is doing well.  To actually hit the bear is either blind luck or very good shooting! 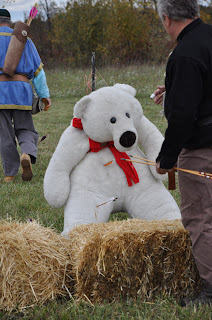 After sufficient warm-up time, we shot a Royal Round.  This involves six arrows shot at each of the targets (20, 30 & 40 yards), and then a timed shoot at the 20-yard target (however many arrows you can loose at it in 30 seconds).  I never do as well at the Royal Round as I do in practice.

Then it was lunch time; hot soup was very welcome on this chilly day! 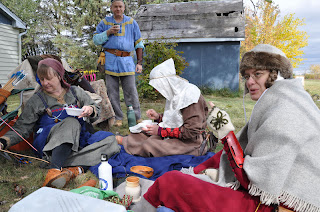 And after lunch the fun shoots began.  First up was a...well...I'm not sure what to call it.  It involved four separate shoots.  First, we had these small targets attached to hay bales that were only 5-15 feet away from us.  You'd be surprised just how difficult it is to shoot at a target that is so close. 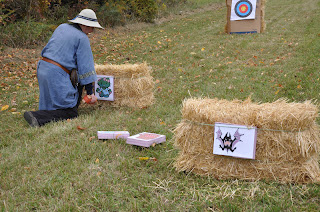 For the second round, we had to shoot at the Black Knight.  Points were only awarded if we got our arrows in his arms or legs. 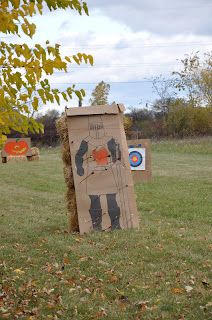 The final round was the clout shoot, but the bear was replaced by a large drawing of a pumpkin (see above shot, in distance).  We shot from the 75 (ish) yard line, then the 50 (ish) yard line, then sort of 30-ish...sneaking up on the pumpkin.  Various points were awarded depending where your arrow(s) landed on the target.

All points were added up and the winner was:  Forrester Dillon! 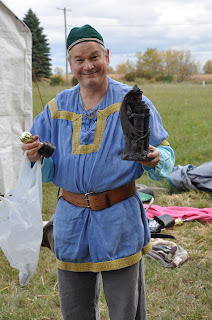 Next up was a "Stuffy Shoot."  An assortment of stuffed toys were scattered across the range. 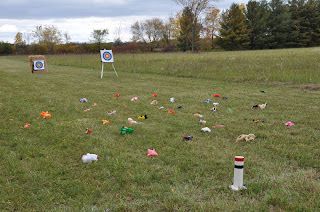 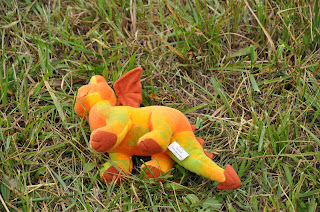 Now you might think this was only for kids, 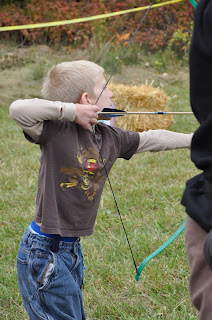 but we are all kids at heart.  You got to keep what you shot: 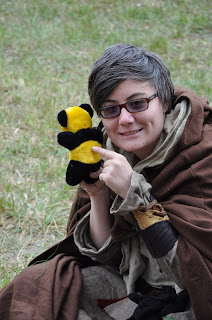 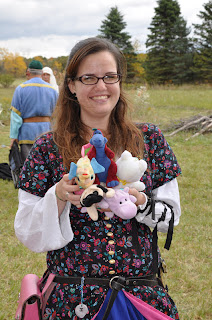 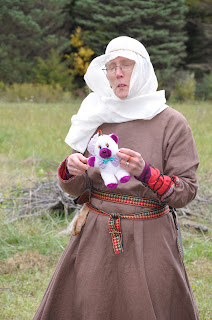 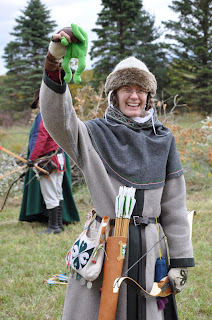 It was a hoot.

Of course, every shoot requires that all arrows not lodged in targets are located.  Sometimes this is easy - they are sitting on top of the ground or poke into the earth at a great angle.  Other times, well, we have to hunt for them.  The group affectionately calls this QUASAR:  Quarrel and Arrow Search and Rescue. 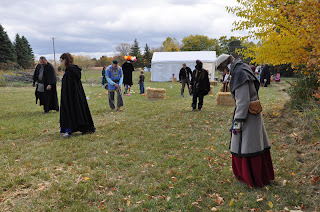 Sometimes you have to bring out ye olde metal detector.  But bare feet are often just as effective...they just don't beep. 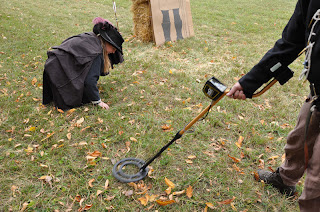 Despite the less-than-optimal weather, 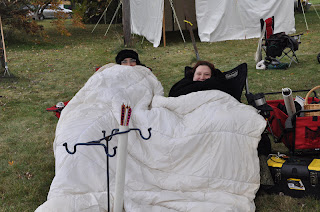 a good time was had by all.  And why not?  Good food, good friends, and target shooting with traditional bows - how could it be anything but fun?
Posted by Ellen Rathbone at 4:44 PM

Email ThisBlogThis!Share to TwitterShare to FacebookShare to Pinterest
Labels: SCA