"The Turk's cap lilies are blooming," my co-worker said early this week.  I had been out on the trails on Sunday, and had not seen any, but apparently by Monday they were there.  So, I had to go out as soon as I had a few spare moments to get some photos; this was a new flower for my life list, after all. 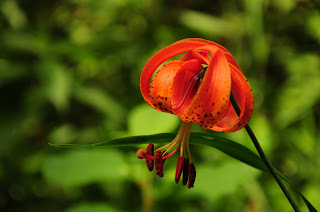 Luckily, there were three in bloom only a short distance down our trails.  It's been ridiculously hot and humid this week, so being outside has not been high on my list of desirable things to do. 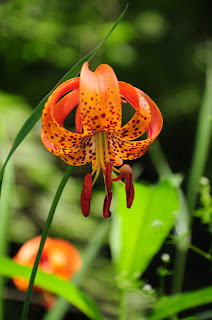 So I hiked out the trail, past the campers, across the bridge, and there they were.  I was surprised at how small the flowers were.  The plants stood 2.5 feet tall (although according to the literature they can get 6-7 feet tall), but the flowers were each smaller than my fist.  I'd say that they are maybe three inches across. 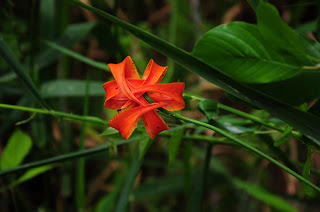 The strongly recurved petals are the source of the plant's name.  The person who named it was apparently reminded of a turban.  There are more than one species of lily called the Turk's cap, and the ones we have in this part of the country are Lilium superbum. We also have Michigan lilies (L. michiganense), which look quite similar (I have yet to see one of these, too).  Apparently the best way to tell the two apart is to look down the throat of the lily.  If there is a distinct "green star" on the inside, it is a Turk's cap.  No star...Michigan.  The flowers I photographed are pretty tightly closed in the center, so we can't use the photos to look for this trait.  The anthers of the Michigan lily are also never more than half an  inch long, whereas those of the Turk's cap are generally over half and inch.  I will have to go back out and take another gander...just to be sure. 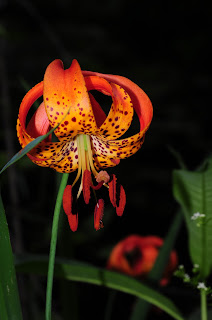 Apparently the roots are edible and once formed a part of the diet of local natives.  Many native insects and even birds (hummingbirds) will sip nectar from these flame-colored beauties.
Posted by Ellen Rathbone at 11:58 AM