Yes, even here in south central Michigan we were hit by the recent Arctic Vortex.  In fact, it was, not counting the wind chill, -20*F at my house...something I haven't seen since I left NY!   Why, even Grand Rapids was reporting -35 (sans wind chill).  Brrr! 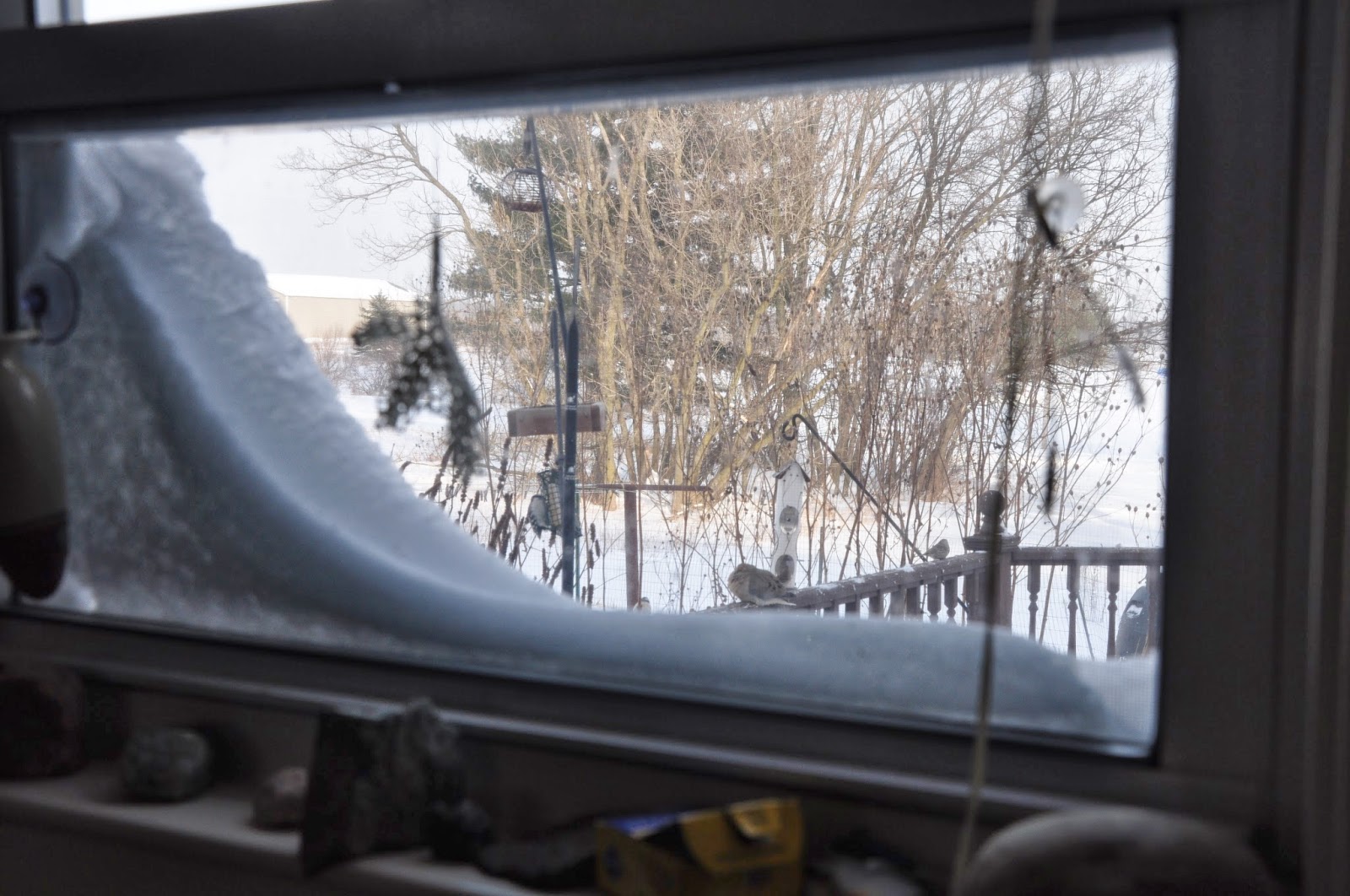 The winds were whipping out of the north - this is the snow built up on my east-facing kitchen window, between the screen and the glass.  I could look out and see the poor frigid birds. 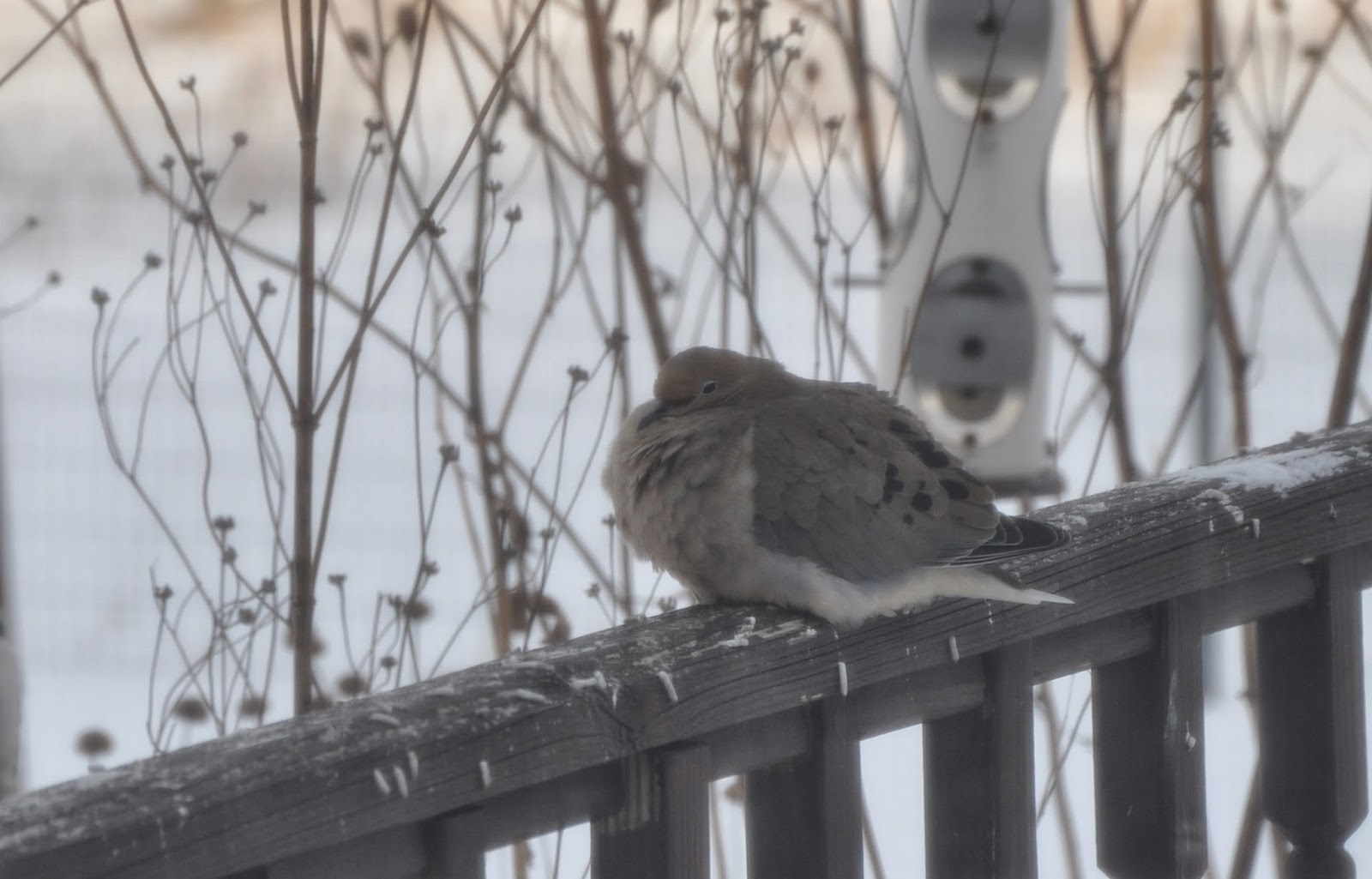 I made sure to keep the feeders stocked!

Meanwhile, out the other side of the house, I shoveled a path to the "regular" bird feeding station.  The birds went through a lot of seed over the three or four days of this weather event.  I scattered a lot on the ground so greater numbers of birds could get their share.  Once the bacon pieces and old pancakes went out there as well, the crows flocked in. 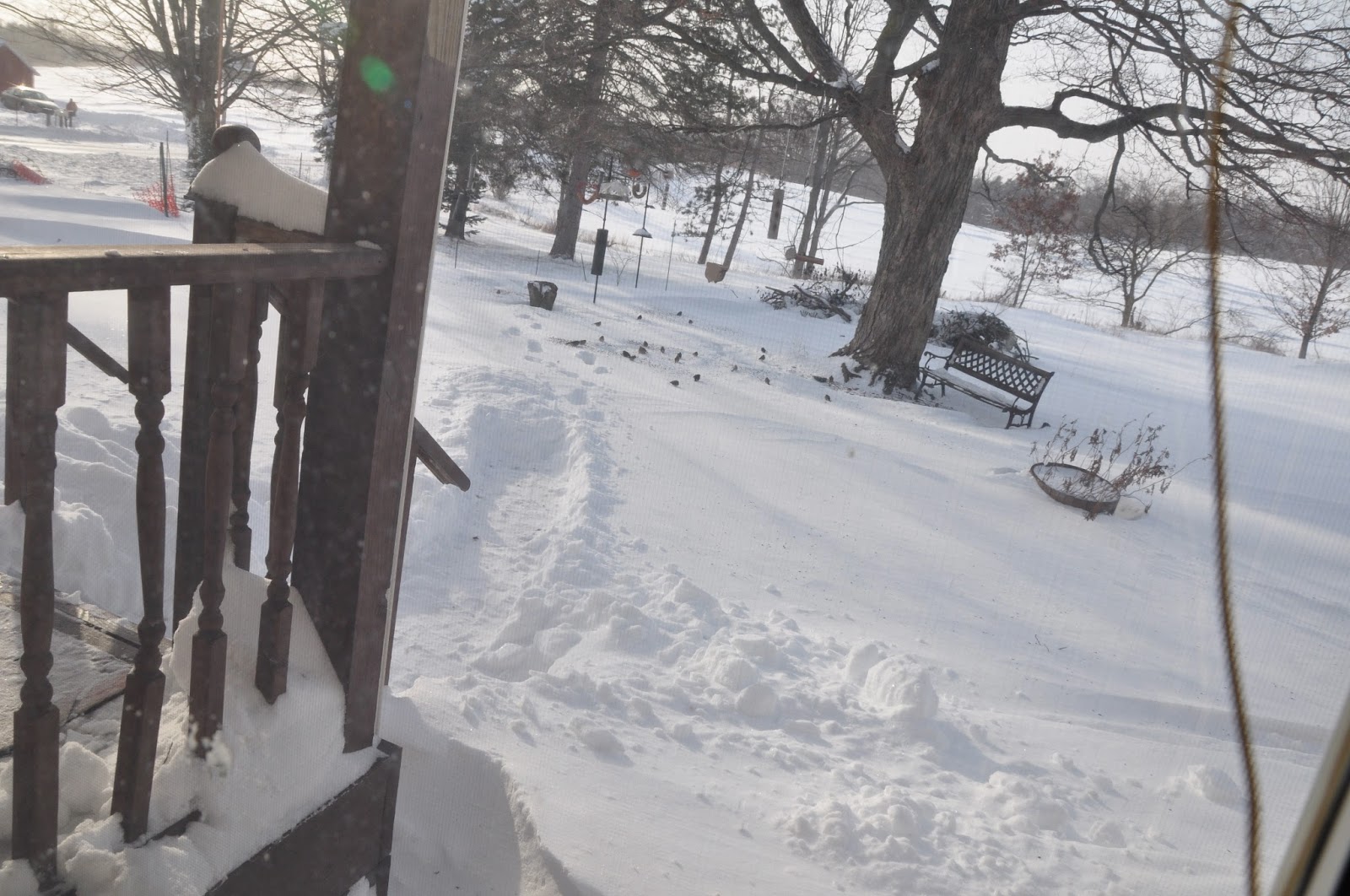 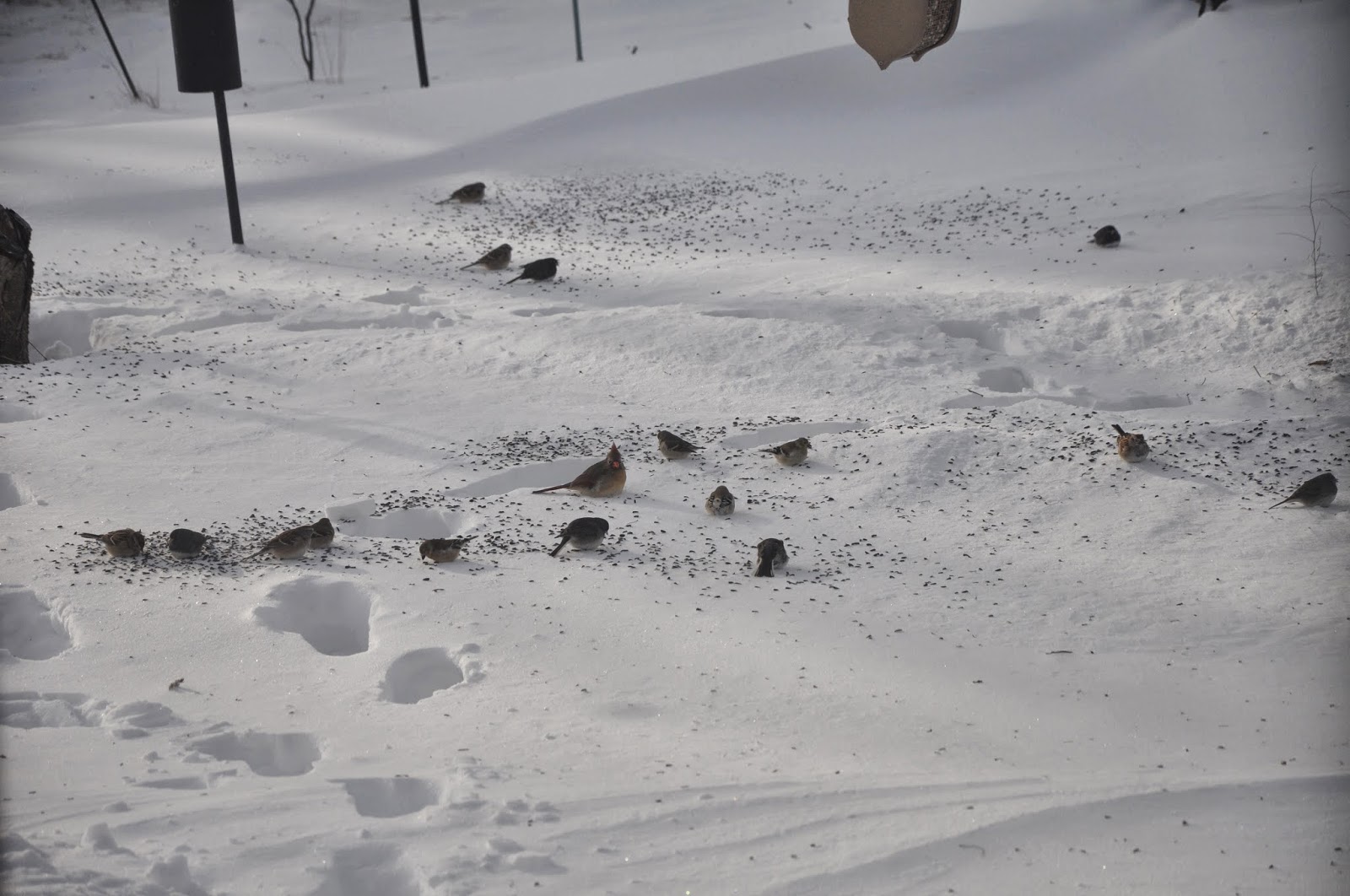 We only got a foot or so of snow, but it was hard to tell thanks to that wind.  I have some drifts that are mid-thigh deep, and other spots where there was just a dusting.  The drifts were enough to confound the neighbor's ATV-powered snowplow...so only a portion of the driveway was cleared (but it was the important part between the garage and the road).

In this video you can see some of the snow whipping up from across the road (the wind was now coming out of the south).  Watch the branches dance!


Eventually the sun did come out, giving the late afternoon a lovely golden glow. 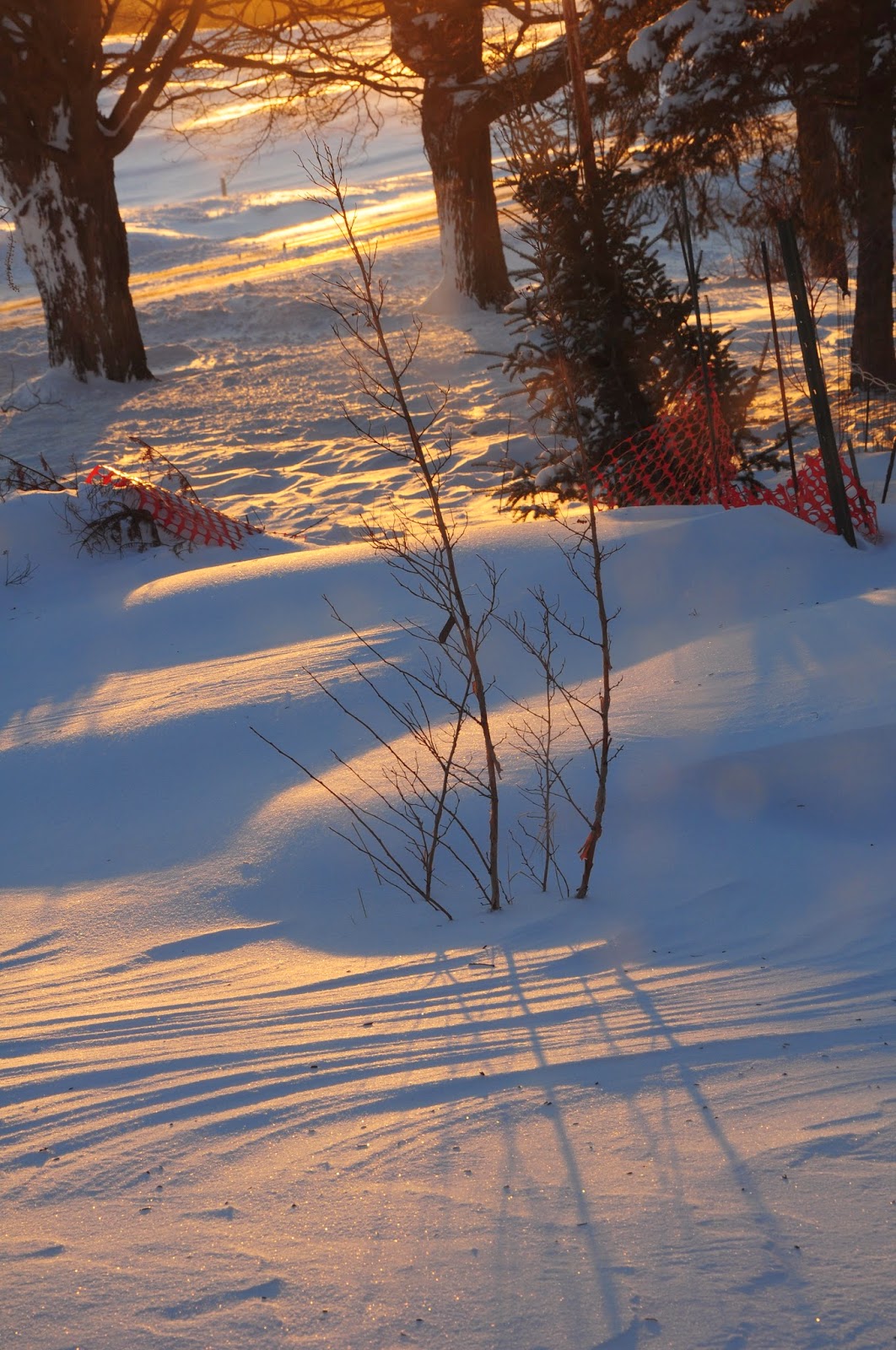 Michiganders, at least in this part of the state, have lost sight of what winter really is.  Give 'em three inches of snow and a 30 degree day, and after two days they are dreaming of summer and wishing winter were over!  Me, well, despite shoveling, I appreciate a "real" winter.  I even broke out my snowshoes in anticipation of a good snowy hike in search of critter tracks (sadly, the rains hit before I had a day to go out on them).


Yesterday and this morning our weather was back up to the low 40s, with plenty of rain.  Although...right now the winds are howling and there is snow once more in the air!  Sure hope all that rain hasn't frozen into sheets of ice before I get home!  It looks like the roller coaster weather of 2013 is going to continue into 2014.
Posted by Ellen Rathbone at 4:41 PM

Email ThisBlogThis!Share to TwitterShare to FacebookShare to Pinterest
Labels: weather