Monday (yesterday) was a glorious day. Even Newcomb hit the mid-40s temperature-wise. Unfortunately, I was out-of-town most of the day, either on the road or sitting at the eye doctor's. But, it was still light out when I got home, so I grabbed the camera and decided to see what was photographable in the yard.

Toby would've rather played. As you can see, he doesn't think too highly of photography: 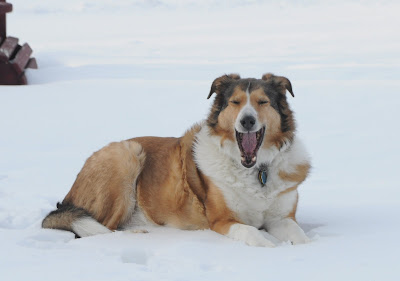 First stop was the bird feeders. Yes, at last "someone" has finally decided to sample from the new feeder. 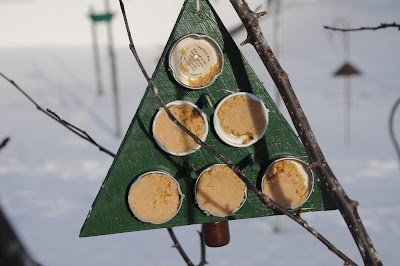 Actually, I've been watching the blue jays work away at this feeder for a couple weeks now. They don't use the perches, though -I suspect the perches are too small. Instead they cling to the branches of the tree and take stabs at the Bark Butter. 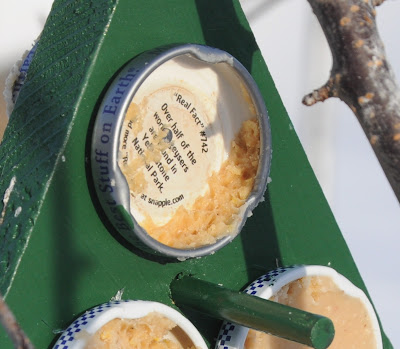 My yard beaver has been acting as a solar sink, absorbing the heat from the sun and melting the snow at its base. I wonder if the ants stay inside the beaver all winter, or if they go underground before the ground freezes. Hm.... 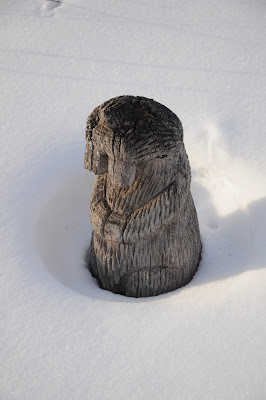 Now, if one didn't know better, one might just think that this is a close-up of a liverwort. In fact, it is a close-up of a golden cedar. This tree is still a small shrub and has a place of honor in one of my flower beds. I have no idea how big it will eventually get, but at the rate it has been growing, I don't think I have to worry about it casting too big a shadow on the other plants any time soon. 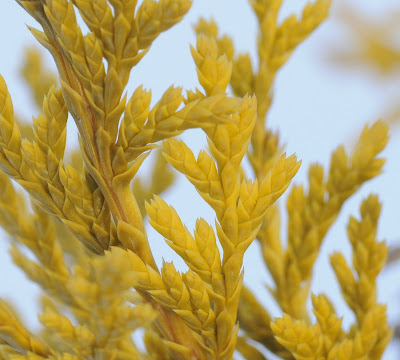 Twenty points to anyone who can guess what this is: Here's another clue - this is the loaded seed pod of the same plant: 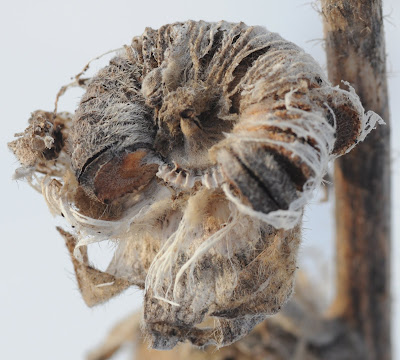 Yes, it is a hollyhock. Isn't it amazing how strange things can look through a macro lens? I love hollyhock seed pods - probably my favorite, after milkweed pods. The seeds are all tucked together in a nice tight ring, like some kind of pastry or coffee cake.

Okay, how about this one: 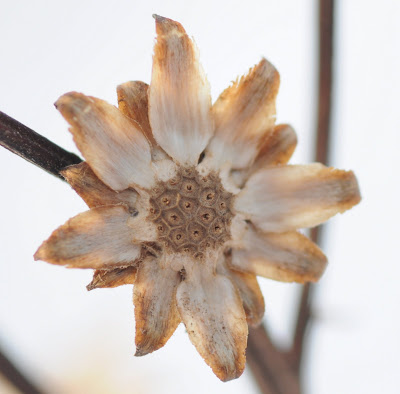 It's a native plant, but one I don't see very often. In fact, the only place I've seen it in almost twenty years is in my garden where I planted it.

Here it is again, but this time with the flower head still in tact: 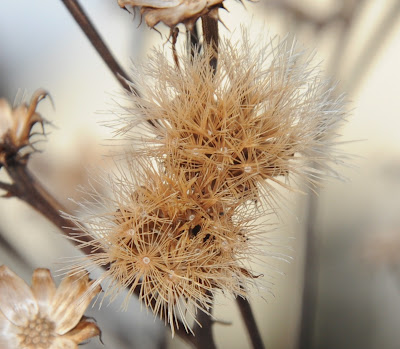 This is New York Ironweed (Vernonia noveboracensis). I'm constantly trying to photograph the thing, but it seems that every time I try the wind starts to blow and I never get an unblurry shot. This included yesterday...had a devil of a time trying to capture an image. The flowers are a beautiful dark purple, and the plant grows over five feet tall. In fact, it is taller than I - so it's gotta' be at least five-and-a-half feet tall. According to Lawrence Newcomb, ironweeds can reach up to ten feet in height!


I love this shot. Any guesses? 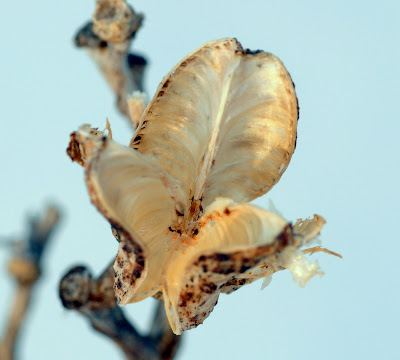 It looks to me like some kind of exotic orchid, but in fact it is just the empty seed pod of a daylily. Kind of neat, though, don't you think?


As mentioned before, the birds are ignoring the sunflower seeds this year. Still, they make for a nice photograph: 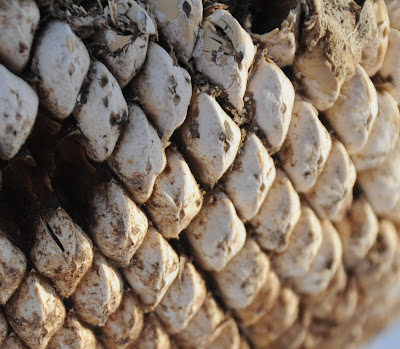 Here we have a pretty good close-up of a nifty plant that is starting to take over some of my gardens: Verbascum. 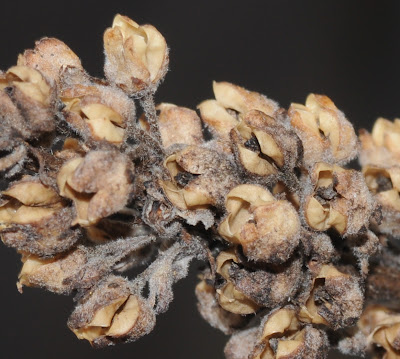 Verbascum is in the same family as mulleins. In fact, they are in the same genus (Verbascum). Mulleins are not native, although they have naturalized pretty darn well and many of our native birds feast on their tiny seeds. This Verbascum has been featured on my blog in the past, with its lovely colorful flowers - scroll down past the hollyhocks here.
Today we woke to fresh snow - I actually had to shovel the driveway (well, it was only a couple inches, so I didn't really HAVE to shovel, but I felt like I should - it is winter after all). More is on the way. In fact, the weather gurus are forecasting a winter storm watch for later today through tomorrow morning. Up to six whole inches. Those of you in the DC/Maryland/PA belt, with your 56" of snow, will likely laugh at our measley 6", but that will almost double what we've had all month! Things are in a state of drought up here. Total new moisture for February so far: 0.31". That's zero-point-three-one...hardly any moisture at all. Dry dry dry. Either we're gonna get nailed later on, or we will be suffering another dry year. Only time will tell.
Posted by Ellen Rathbone at 10:17 AM