Yes, yes, I am in Michigan again. This is my third trip out here now, the second in the continuing mission to find a place to live. Some possibilities have finally turned up, and I suppose one can live anywhere for a year or two.

But, instead of dwelling on that, I thought I'd share some of the scenes I have seen these last few days, starting with this very interesting bridge in Toledo, Ohio. 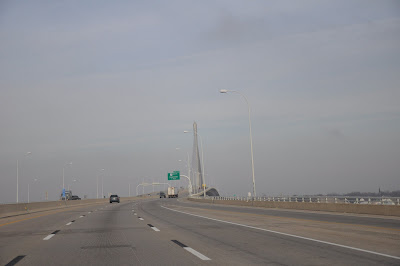 Now, one really shouldn't be looking through the viewfinder of one's camera while one is driving, especially on a major highway. Still, I really wanted to get a photo of the suspension (?) structure of the bridge, and this one shot (above) just didn't capture it.

So, after I fiddled with the camera to try and get a setting, I finally just had to aim out the window and hope for the best - blind photography. It really is a visually stunning structure. 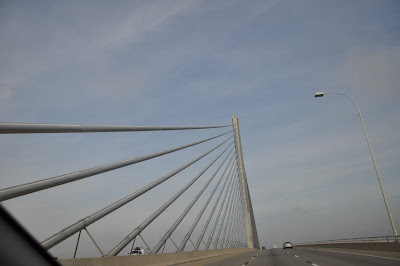 I've been in MI now for four days, each day seeing me on the streets and roads and calling rental agencies in search of a dwelling. In between the viewings, however, I've taken in some of the sights of Jackson.

This really is a rather fascinating city, with a diverse and rich history. Sadly, it seems that most of the industry has folded or moved out of town, leaving many empty factories, vacant lots, and much unemployment.

Still, there remains plenty to see and do.

One of the attractions, which is closed for the season, is The Cascades. I heard about this last week from one of the VIC volunteers who has traveled out here with his family. It is a series of man-made waterfalls, built on a man-made hill. At the very bottom of the fall it looked like there is an amphitheater of sorts; I imagine that in the summer there are shows here featuring the falls.

The afternoon I stopped by, there was no water and no visitors. Everything was locked away behind a prison-like chainlink fence with barbed wire along the top. The fence is the reason for the grey blurs in the photo below.

The next afternoon I drove around the more scenic rural countryside over toward the charming little village of Concord. It had been raining off and on, and dark clouds dashed across the sky, letting the sun peek out at intervals.

This part of Michigan has a few very low and gently rolling hills, but even so, flatness and great expanses of sky are emphasized, especially where large agricultural fields are the norm.

In this particular field, the cattle had been turned loose post corn harvest.

Most of the animals didn't even bat an ear in my direction. Only a few looked up in curiosity. 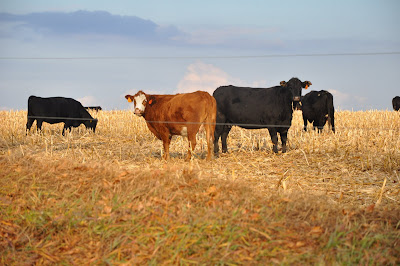 This one however, really didn't know what to make of me. When I parked the car along the roadside, he was grazing right at the edge of the fence. Then I started to walk towards him. PANIC! He looked up, and bolted at high speed. He didn't go too far before he turned around to see just what it was that was possibly going to attack. I took his photo and reassured him that I was no threat. Meanwhile, a couple sandhill cranes croaked in the background. I looked for them, but they remained invisible. I learned last night that the count over at Hahnley Audubon Sanctuary a few days ago was over 5000 cranes - a record. 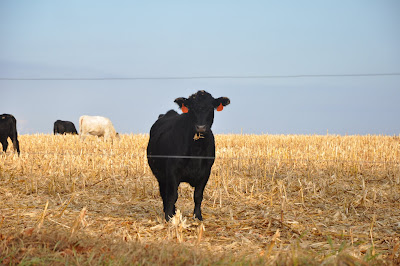 I continued the drive toward Concord. This is lovely countryside. 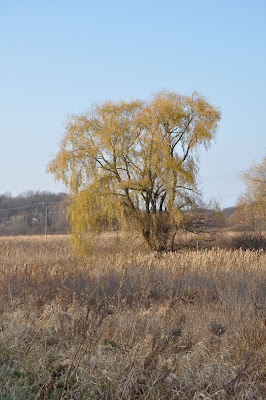 Now, you've just gotta love a place that paints signs like this on the sides of their buildings! 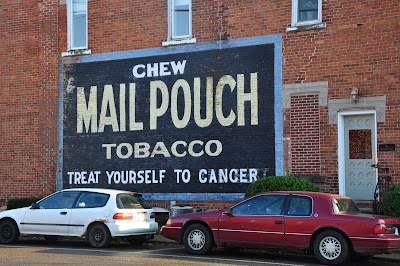 Concord is also one end of The Falling Waters Trail, a paved footpath that runs almost 17 miles, from Concord through Jackson. I only just set my toes over the end here - I had places I needed to go, so I couldn't stay and stroll. The waxing moon glanced over the trees at the beginning (end?) of the trail. 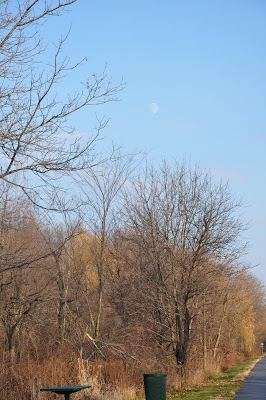 And this brings us up to yesterday. I had some time to kill between viewings (sounds like I take in the funeral home circuit, doesn't it?), so I drove to Ella Sharp Park, a city park of something like 500 acres! 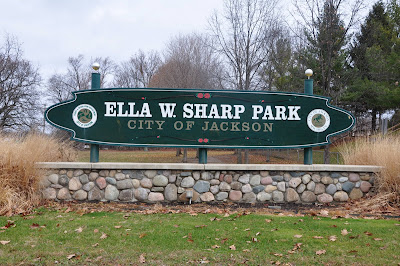 One of the destinations in the park is this planetarium. Sadly, it was closed. 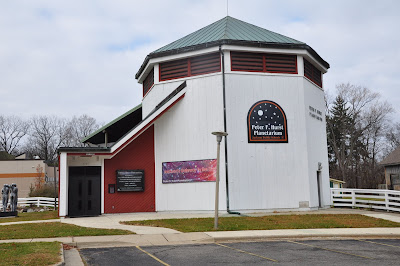 The Ella Sharp Museum of Art and History was open, however, and for a mere $5 I was able to stroll through about five small galleries. They had a very interesting "wildlife" exhibit, featuring primarily birds donated from a local collector. These were stuffed birds as well as woodcarvings and bronze casts. The artistry was amazing. 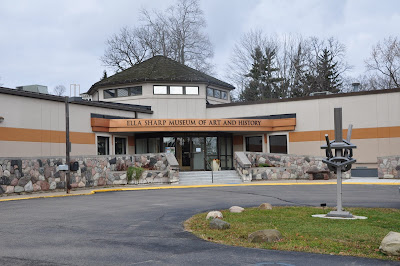 I also greatly enjoyed the exhibits about the local history. This is where I learned of all the various industries that used to call Jackson home, from automobile parts to garden hoes and potato planters. One of the first television sets (pre-WWII; the image was cast upwards and viewed via a mirror that reflected it out 90 degrees) was created here, too.

They had a room filled with Saturday Evening Post covers, all Norman Rockwell paintings, and featuring mostly seasonal issues: Halloween, Thanksgiving and Christmas.

Outside there were some interesting sculptures: 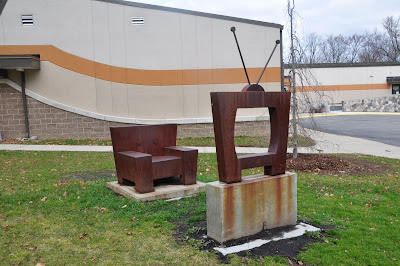 The drive through the park passed this stream. Jackson is the headwaters region of several (all?) of Michigan's major rivers, including the Grand and the Kalamazoo. This might be one of them. 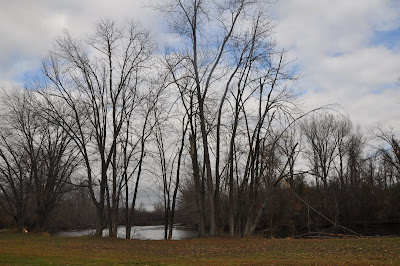 Today I begin my journey back to New York. I'm waiting to hear back from one more landlord, and then I must make some decisions. It will be good to sleep in my own bed again (tomorrow?) and to see the critters. Many thanks to the pet sitters who have been helping me out!
Posted by Ellen Rathbone at 11:11 AM