A Visit to the New Work Place

Yesterday I made a stop at my future place of employment to stretch my legs and while away some time before an appointment to look at an apartment. I took a quick walk with the camera in tow, just in case.

Here's view of the entryway with its wonderful gardens.

I only had about 45 minutes, so I walked quickly. I found myself drawn to the same plants I photographed last month when I was here. Could that be because they were still green? Last month I mused over this one, and now, based on something I read in the Conservancy's newsletter, I'm thinking this is the buckthorn - invasive! This was one of the plants I was on the lookout for this summer while doing my invasive inventories, but I've seen it so seldomly (like maybe twice) that I don't have it locked in my memory yet. 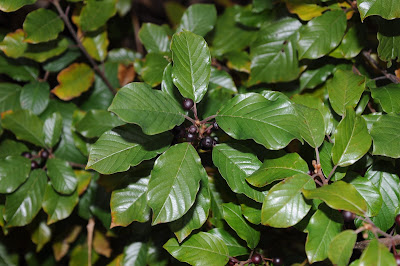 The stream was trickling along. Last week some severe storms passed through the midwest and the Conservancy had some tree damage on their property. I could see where they were doing some cleanup, but it also looked like they were tackling some of the invasives, for I walked past at least one pile of Russian olives that were cut and stacked. 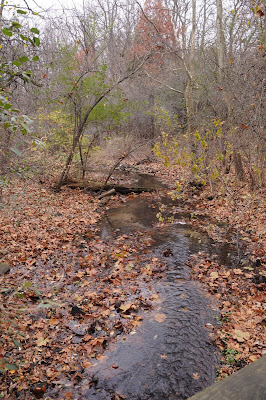 I was happy to see a familiar native plant: nannyberry, one of the viburnums. Birds love it. 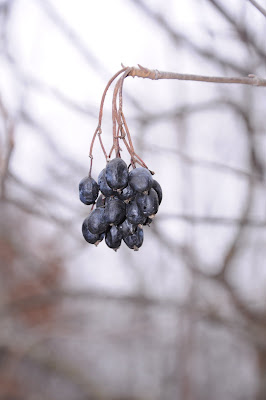 Some tall green shrubs caught my eye next. They had little red berries. What could they be? 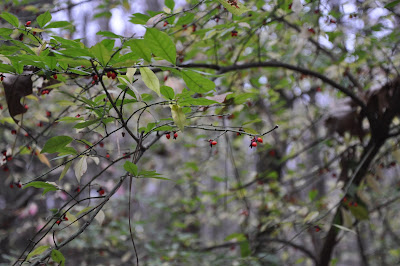 The understory was dominated by them. (This should've been a clue, and I know my friend Jackie knows what it is already.) 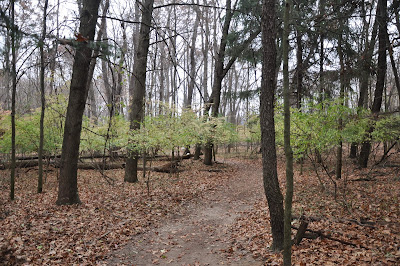 A closer look at the leaves, and the stems, and I suddenly knew what it was! 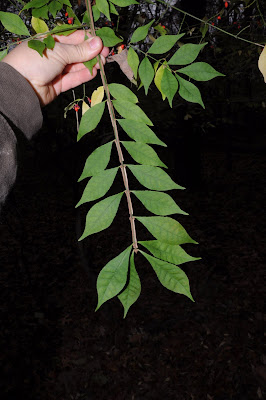 They may call it the Winged Wahoo here, but we know it as Euonymus, or the horrible burning bush. I've seen it as individual shrubs down in the Saratoga region, some quite tall, but here was a perfect example of what happens when non-natives get out of control on the natural landscape. I really need to rip out the two burning bushes at my house...and the Japanese barberry (which I saw last week has begun its invasion: I found two stalks of it in my field). 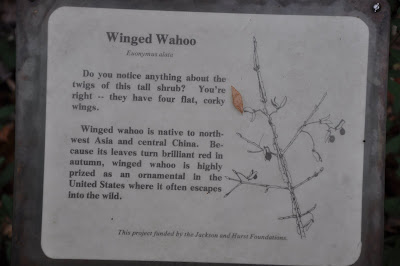 Today I had some time to kill between apartment hunting appointments, so I stopped by the Conservancy again. This time I got to meet some of my future co-workers. What a terrific bunch of people! I am really looking forward to working with them.

After a lengthy chat and introductions all around, I got a tour of the buildings, a jar of Dahlem Maple Syrup (Mmmmm!), and reassurances that they would all keep their eyes peeled for suitable housing for me. I am ever so grateful.

Then I got directions to the farm portion of the property, which I had yet to see. It's essentially just around the block from the Conservancy headquarters. I drove over and saw the wonderful old white barn, with the terrific new high tunnel nearby.

Driving around the loop, I came to the Community Garden, which is quite extensive! I believe it is about an acre in size, surrounded by a deer fence. The plots are something like 20'x20' - a nice size. Here's the view to the left of the gateway (you can see the beds have mostly been cleaned up for winter)...

The top of the barn peeked up over the tall grasses. There isn't a whole lot of elevation here - I had to climb on the car to get high enough to see enough of the barn to photograph! 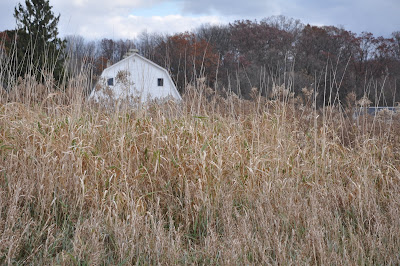 So, things are looking up a bit today. I still haven't found a place to live, but I remain hopeful that my new friends will ferret something out.

Meanwhile, I'm on my way back to New York. I have a dog and a cat awaiting my return, a class to teach on Monday, and I have to be in the office on Thursday. Then, well, I may be headed back out here to look for housing once again.
Posted by Ellen Rathbone at 8:15 PM