It was the end of a long day at work, so I passed the final minutes before we locked up gazing out The Window to see what was happening.

Something new had been added to the feeding station:  peanuts!

Now, normally, peanuts would be snarfed up faster than you could say "wha...?", but it seems that the birds and the fox squirrels needed a clue.

As you can see below, Pudgy the Squirrel sat among the peanuts completely oblivious to the manna from heaven that littered the stump at his feet.  (These two photos, by the way, are not enlarged - that's how close I was to the squirrel - less than three feet.  Gotta luv The Window!) 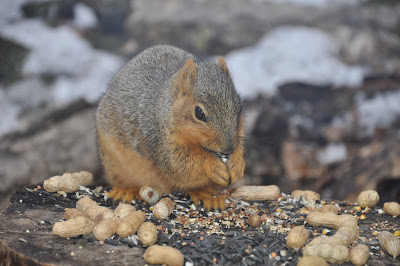 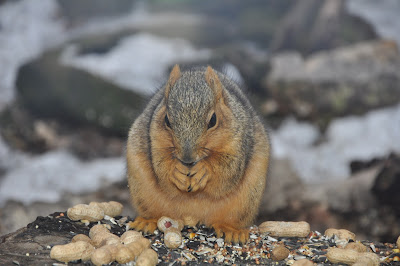 But wait!  Who is that down on the ground?  Someone else has discovered the peanuts! 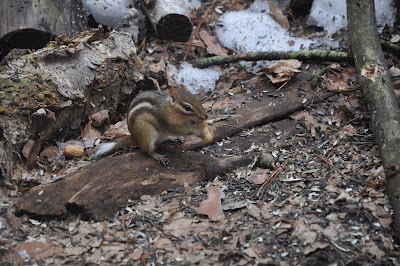 Hang on...did you see something strange about that chipmunk?  Maybe he'll come back.  Yes, indeed, there he is by the bird bath.  Let's wait and see if he comes closer. 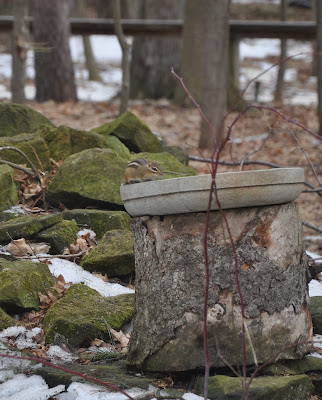 Sure enough!  Look!  It is the rare and elusive white-tailed chipmunk (Tamisciurus odocoileus)!  What a find!  The long white hairs on this animal's tail remind me of the flowing white fur found on the backs and tails of colobus monkeys. 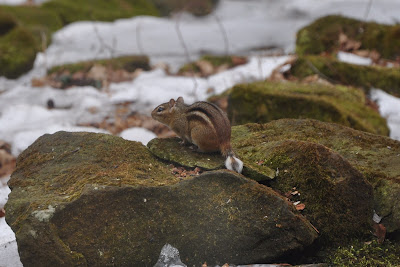 Tufty the Chipmunk stops for a sip at the local bar - slurping up water as it oozes through the moss and down the side of the rock. 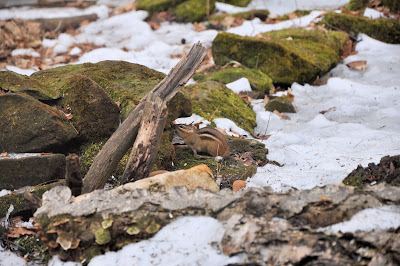 Oops!  Caught in the act! 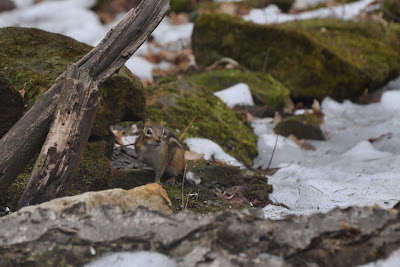 Once Tufty discovered the peanuts, though, nothing was going to keep him from mining this claim until all the treasure was safely stored back home...even if it had to be done one peanut at a time. 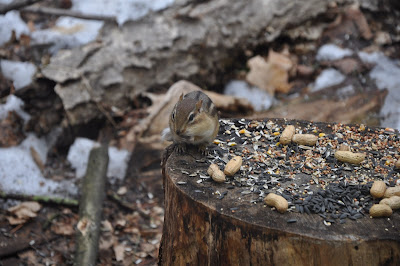 Well...one thing will keep him from his goal.  Pudgy the Fox Squirrel returned and staked his own claim on the stump.  Poor Tufty - every time he sallied forth to scale the stump and snag another peanut to spirit away to his cache, Pudgy would lunge, sending Tufty flying off the stump and dashing for cover. 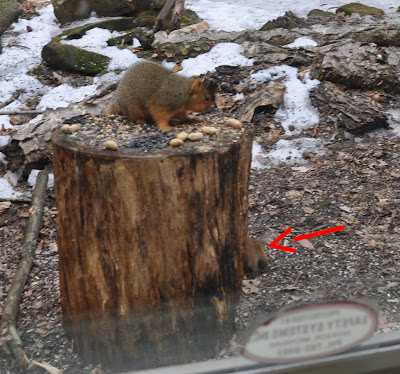 Maybe eventually Pudgy will discover the treasure that Tufty so sought.  We'll see how many peanuts remain tomorrow.

Meanwhile, the skies are filled with sandhill cranes, mute swans, bluebirds, robins, tufted titmice, cardinals, robins, red-bellied woodpeckers - all singing their springtime songs.  The lakes, ponds, streams and fens are all starting to melt.  Vernal pools are forming in the woods during the day, only to refreeze at night.  We are just over a week away from the equinox.  Huzzah!
Posted by Ellen Rathbone at 8:51 PM

Email ThisBlogThis!Share to TwitterShare to FacebookShare to Pinterest
Labels: squirrels