A Day of Adventure!

The word was out last week, and by Saturday, a plan was set to meet by 8:30 AM Monday at a car pool site north of 94.  Ten of us showed up, passports in hand, and off we went to Canada.  The sun was out and it was going to be a beautiful day.
In less than wo hours or so after we left, we were nearing The Site, as evidenced by cars parked along the roadside and people lining the the shoulder. 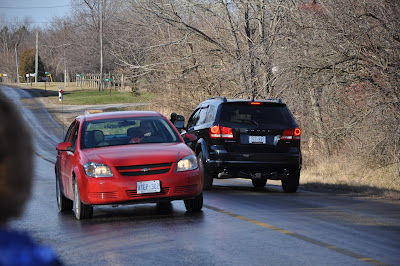 What in the world were we there for?  Can you see it below?  In front of the people? 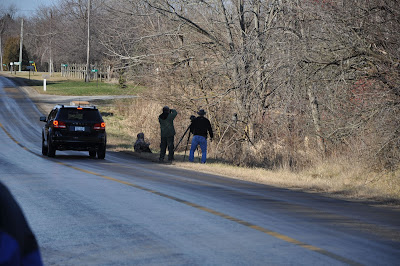 It was a great grey owl.   This bird had flown down from way up north in search of food and had been hanging around for a few days.  So here it was, trying to find something to eat, and all these people were lined up literally within spitting distance of it to take its picture. 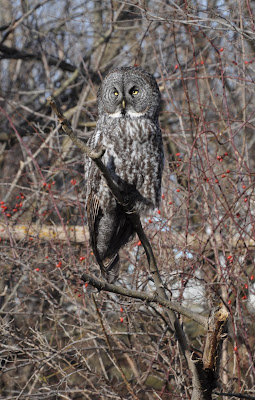 I confess, I was one of the perpetrators - but at least this time I had the right lens for my camera (the last time I went in search of a great grey, up in Montreal, I got to the site and was getting my gear ready only to discover I had brought my macro lens instead of the zoom).

This bird, however, was really quite focused on trying to find food.  It sat there very patiently, turning its head this way and that, using that marvelous facial disc to listen for the rustle of any small mammal in the dry leaves on the ground.  The constant clicking and beeping of upwards of 30 or 40 cameras seemed to be of little concern. 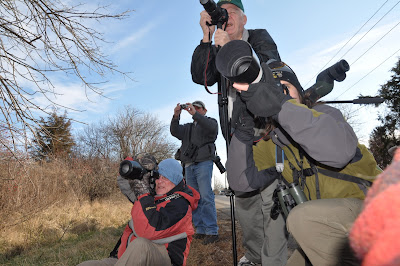 Great greys are probably my most favorite of the owls.  Saw-whets are cute, but there's just something majestic about this bird, the tallest of the North American owls (snowy owls are the heaviest). Normally a denizen of the far northern forests, where it is often called the ghost bird, the great grey hunts in the deep silence far from the bustle and noise of civilization.  When food becomes scarce, however, it heads southward in search of better hunting grounds.  Small mammals make up the majority of its diet.


We got to watch some good behaviors, including a little grooming: 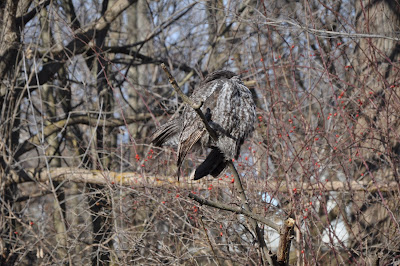 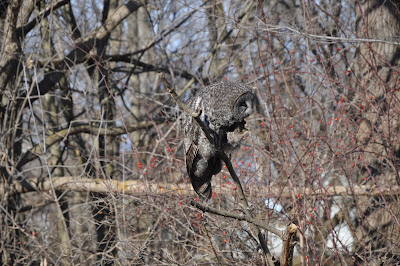 And for those who prefer action shots, here's a video of the bird taking care of an itch (I didn't have my tripod - who knew there'd be video opportunities - so be warned, it's a bit jumpy).


Finally, after what must've been a half hour or more, the bird started to take exception to our presence. 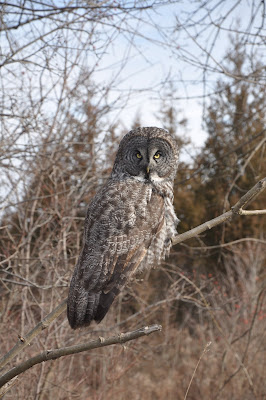 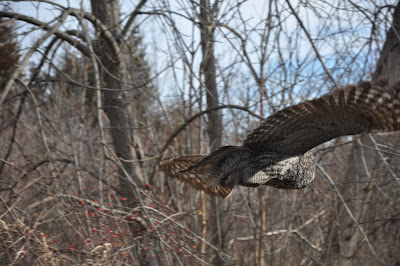 He flew down the road maybe a hundred feet or so and landed.  The herd followed. 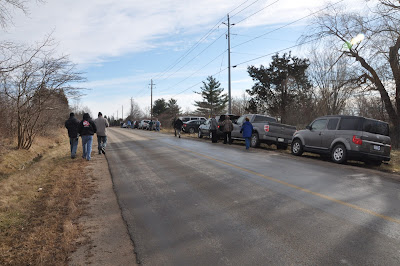 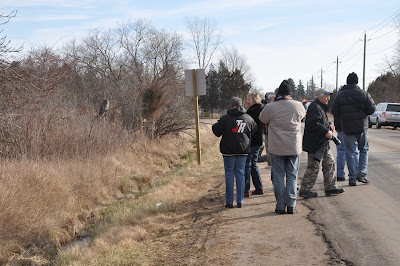 Again he took off. 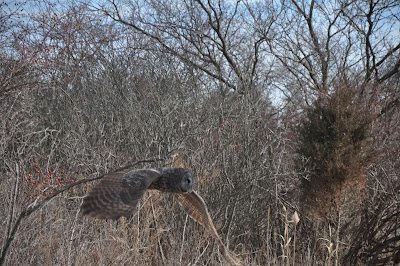 A fence post across the road was a good perch... 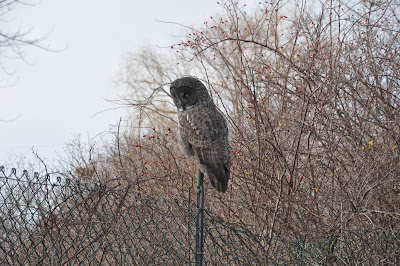 but the paparazzi followed again, so he crouched... 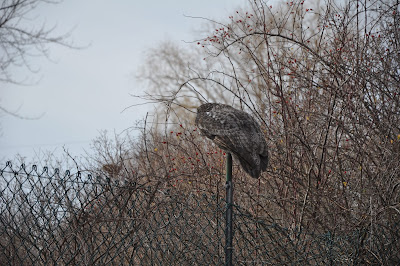 ...and launched.  This time he went where we could not follow:  into a thicket behind a wire fence.  At last - some peace to hunt.  Notice the really large feet.  They are covered with feathers, which help this northern bird stay warm in normally subzero temperatures. 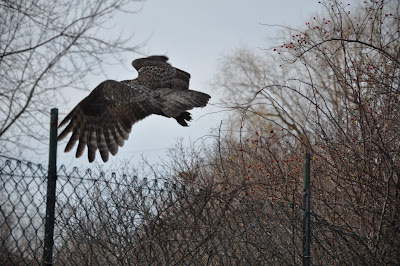 Next on our agenda was stopping by the ferry station along Lake Erie. 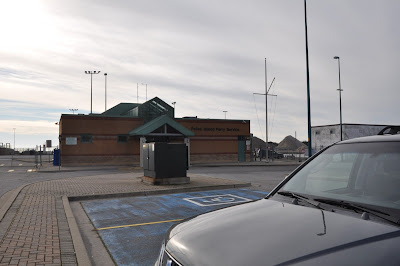 Our goal at the lake was to search for gulls.  At the first stop gulls were few and far between. 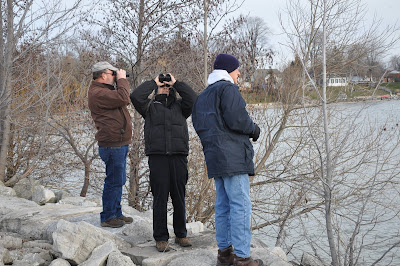 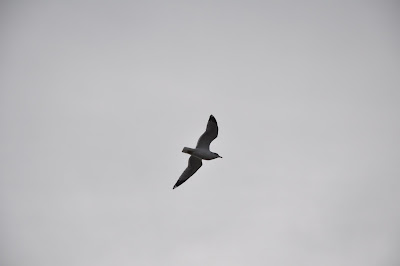 So we headed off for our next stop:  The Onion Fields.  This area of very flat land was (and still is being) drained so the original settlers could access the very rich wetland soils.  The resulting mucklands were used for growing onions.  The fields didn't look terribly oniony when we were there, but it was for onions that we had come - we were looking for snowy owls.  Luck was with us, we found two!  Do you see it below?  It's that tiny white dot slightly up and to the left of the center of the photograph. 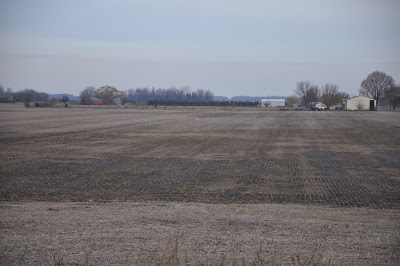 Here's the cropped image - the bird is just above and right of center: 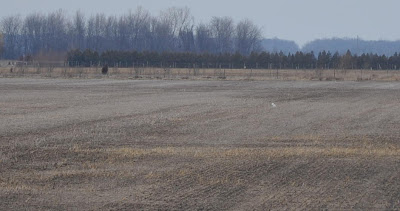 I'm afraid that's as good as it gets with the snowy.  Unlike the great grey, which sat right along the roadside, the snowies were smack dab in the middle of these large fields that were surrounded by deep ditches. 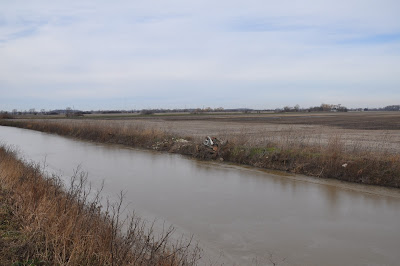 After a quick bite to eat, we dashed back to another ferry landing, just in case some gulls or other interesting shorebirds showed up.  By now the wind had picked up quite and we had a bit of a surf rolling in. 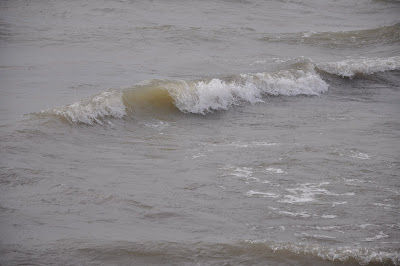 This didn't seem to deter the birds too much, for we watched a flotilla of Canada geese bob along unconcerned, and a raft of golden eyes were also floating nearby.  We saw a couple redheaded ducks, too, but the big find along the shore was a greater black-backed gull. 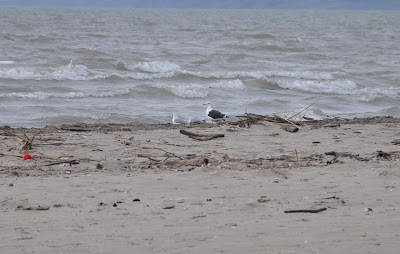 By now the clouds were rolling in and it was time to head back to The States.  On our way across the border, we had a little excitement as one of our vehicles was pulled over for having set off the radiation sensors.  The officials came out and were using their hand-held radiation detectors to locate the source of the potential crime.  Soon we saw bags and one of our people escorted into the building.  It turns out that our friend had an old WWII compass that had been a gift from an uncle.  This compass apparently has a slightly radioactive compound in the paint on the dial, which set off the alarms as being similar to the radioactive products used in "smart bombs."  We all got a good chuckle out of this unplanned adventure.

When I finally was headed back toward the old homestead yesterday evening, a gorgeous orange full moon of impressive size was on the rise.  I nearly floored the gas pedal to get home before it was up and drained of color.  Grabbing the tripod and dog (who had been inside all day and needed respite), I dashed out back to snap some shots. 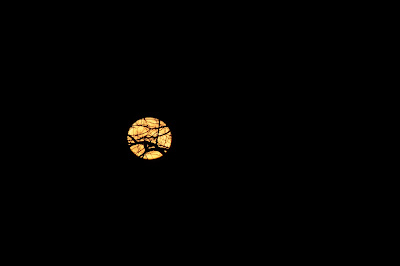 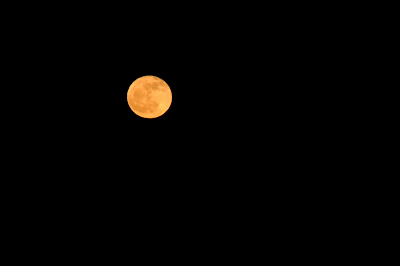 While I was out there, I thought I'd see if the camera could pick up more stars that my eyes could see.  About the only constellations I could make out were Cassiopeia (below) and Orion (partly hidden by a tree). The camera got this pretty good shot of Jupiter and two of its moons, though! 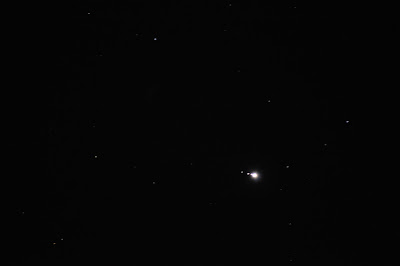 I haven't consulted any star charts yet, but this bright one was in the western sky (about 6:00/6:30 PM).  Could it be Venus?  I was fascinated by the effect I got from the plane that flew by, flashing its red light. 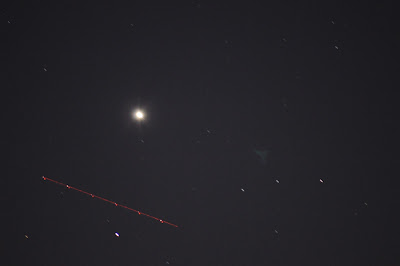 Every evening there is a smudge of stars that I can just barely see when I look directly toward it, but see much more brightly from the corner of my eye.  I believe these are the Pleiades - the camera picked them up nicely, too. 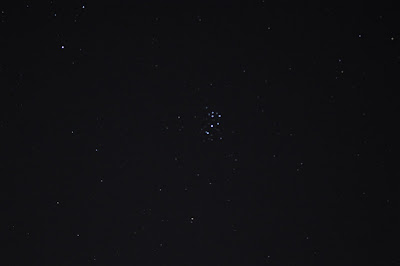 As Calvin would say, the day was just packed. What a perfect way to spend a day off from work.
Posted by Ellen Rathbone at 2:42 PM