How was Sunday in your neck of the woods?  It was balmy and sunny here.  I opened all the windows in the house and oh that fresh air smelled fine.  Laundry hung on the line was nearly dry within an hour!  It's good to have some warmth.

I knew that the latter part of the day, before the sun set, would be spent wandering with Toby in the nearby game area, so the rest of the day was spent getting chores done.  At 4:30 we headed out.

It's amazing to me, every year, just how quickly the trees respond to a little warm sunlight.  Admittedly, the lengthening daily photoperiod is also having its affect, but the warmth often seems to trigger things.  Even at a distance one can easily see the swollen buds on trees. 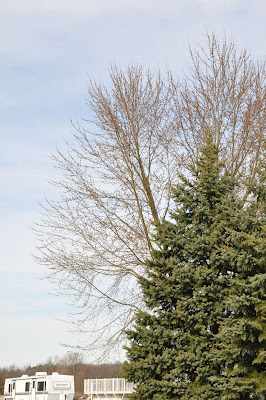 Upon closer inspection as we walked beneath this silver maple, I saw that not only were the buds swollen, but the flowers were blooming! 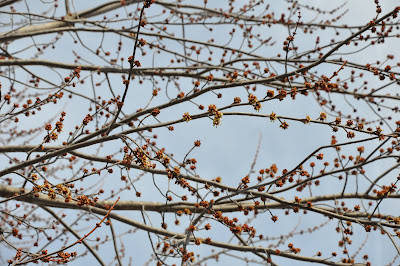 Highway crews have also been out, with their branch-rending equipment.  Around here, instead of sending out crews to cut back the tangled roadside growth, they send out a single guy with a machine that just rips the living daylights out of trees, shrubs and saplings, leaving twisted, splintered, shredded devastation in its wake.  What an unsightly mess! 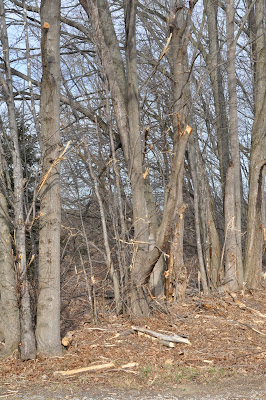 Spring is also a time of increased roadkill.  We found this pudgy skunk napping permanently along the roadside.  I am constantly amazed at the variety in the coloration of skunks.  While we all know that individuals (of any species) have their own traits, overall the species looks the same.  With skunks, however, the variation seems much more pronounced, perhaps because their coloration is so simple:  black and white.  And when you see an individual, like this one, where the white is extensive, it stands out, as would an individual whose white strips were very thin!  (Photographing a roadkilled skunk is not easily done with a dog in tow.) 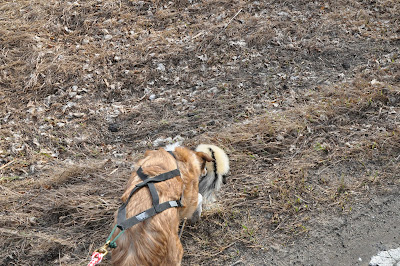 I'm quite fond of skunks, which always seem to get a bad rap.  They are sweet animals, though.  Having cared for a baby skunk once, and meeting the pet skunk of a college friend, I've gotten to see them beyond their reputation.  They are nice animals, if aromatic. 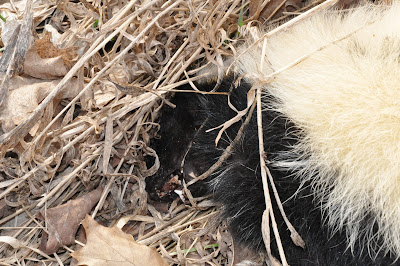 About 3/4 mile from the house we reached our destination:  one of the gated entries into the Sharonville Game Area. 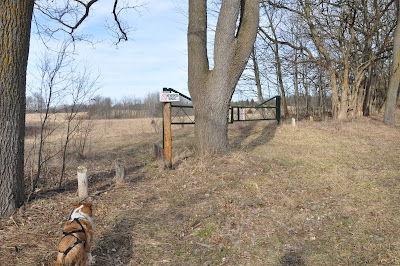 Here we are - a map of the whole area.  The Sharonville Game Area is essentially a state-maintained hunting area.  It's quite extensive.  I haven't spent much time exploring here for a couple reasons.  One, in the fall and winter there's a lot of hunting going on in there.  Two, in the summer, it's tick city!  And three, there are no trails (to speak of) for just walking.  But a couple weeks ago Toby and I did a very short wander in the section we revisited this evening, and I wanted to go back. 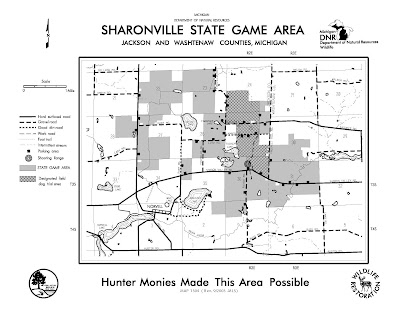 Here's an enlargement of the section we did - more or less in the middle of the map above.  The tan line marks the general direction of our wander this trip.  The red dot is our house. 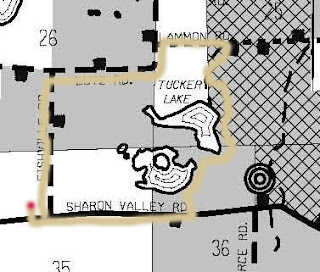 I was glad to find this map because it confirmed what I suspected:  there are two ponds/lakes back in there, not just one!

So, off we went, across the field.  There was lots to see, like this old coyote scat.  Many nights we have heard the coyotes yipping and howling in the fields around us.  It's a wonderful sound...as long as it's in the distance.  I confess I get a little nervous when I think the sounds are getting close. 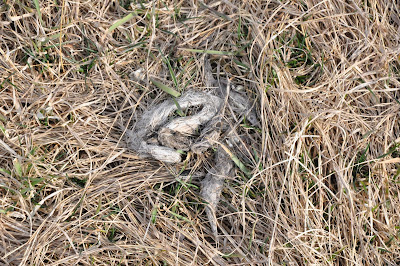 Looking north(-ish) across the field, there is a robust stand of brambles right before the tree line (which borders the first pond/lake).   It really is quite extensive.  I asked Gary if these brambles were considered "native" or "invasive," and he sort of implied they were a welcome part of the landscape because it is within these brambles that indigo buntings build their nests.  So, are they native?  I think so. 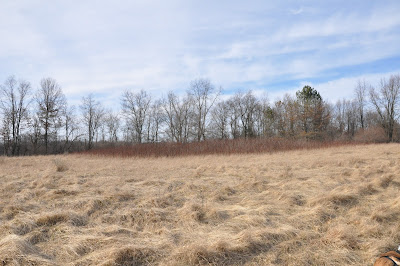 And in case you were wondering which brambly plant they are, they are blackberries.  Blackberries are easily identified by their square stems.  They also have palmately compound leaves, typically with five leaflets.  It's a bit early to see leaves, but the square stems were obvious. 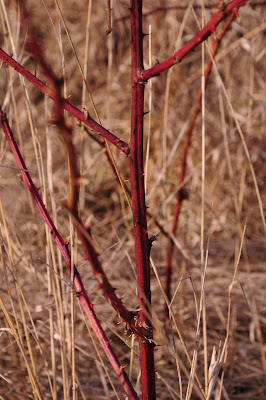 It was quite warm in the sun.  Even though he blew his winter coat back in November/December, Toby was panting away to keep cool. 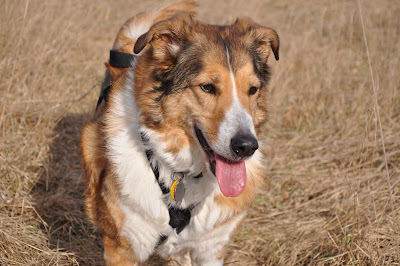 The first (and last) time we were here, a pair of sandhill cranes had staked out the rise of a small hill.  Today they were down on the other side.  Toby of course sounded the alarm, letting them know we were there.  Fortunately, I was able to quiet him down and we sat and watched the birds for a while.  Once silence fell, the birds calmed back down. 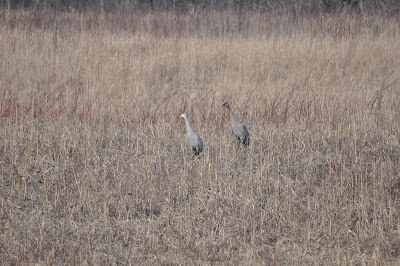 Pardon the bounciness in the video below.  I had the camera braced against my knees, but with the big lens, holding it still was impossible.  Another case made for schlepping a tripod around.

But, we couldn't sit around all evening, so eventually we stood.  The cranes, which by now were hidden in some tall grasses, finally decided that we were just too much for them, and they took off. 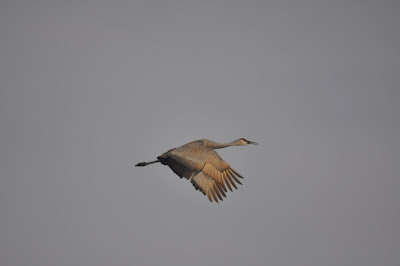 I'm sure they'll be back.  I think these ponds/lakes are roosting areas for cranes.  Last year we heard cranes in this direction every evening, and we would see them all flying in this direction as the sun set. 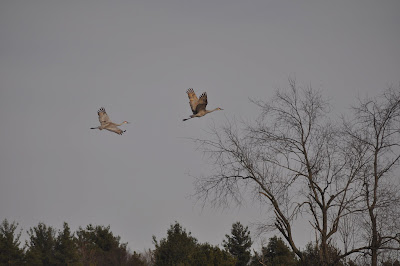 So, onward we went.  This is, I believe, the second body of water, labeled Tucker Lake on the map. 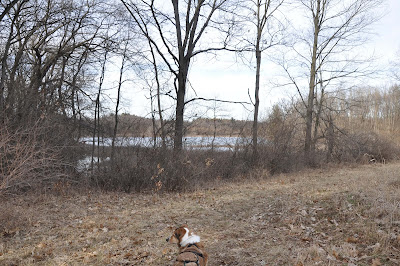 Although the land is managed for wildlife (game animals), they don't really do much, or so it seems, to control invasive species.  There is a LOT of honeysuckle in these areas, and here we see it getting ready to leaf out.  These Asian honeysuckles were once touted as wonderful additions to the landscape because it was thought they were terrific sources of wildlife food.  Unfortunately, it isn't the best quality food for our native wildlife!  That would be native plants.  So, here we are, fifty years later, over-run with non-native shrubs that are pushing out the really beneficial plants.  I think getting these under control is going to require much more time and manpower than the state has available to commit.  Pity.  Maybe some day. 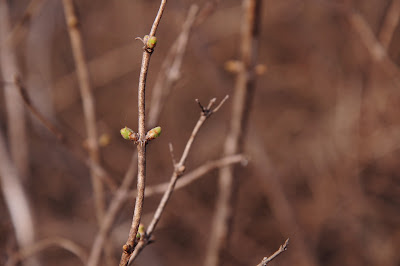 We were following a well-worn trail.  I don't know if it was a deer trail or a hunter trail, but it was very well-established.

Soon we were leaving the fields and entering a scrubby, brushy area, where we encountered a mess of "something" under some trees.  Was this a bait station?  It certainly didn't look like anything natural that I was familiar with. 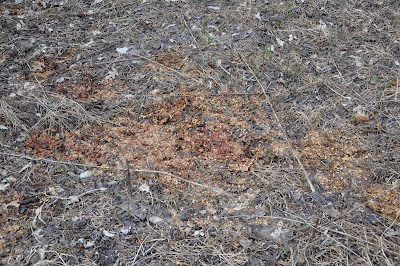 A hole in the ground deserved a thorough sniffing. 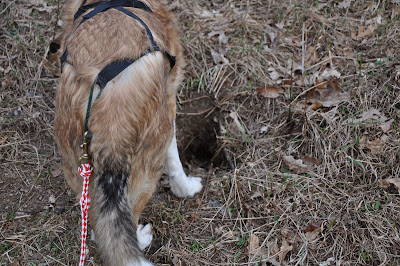 A pile of scat on the sand nearby suggested that coyotes were here, too.  The hole was too small to be a coyote den, but it could be an area the coyotes hunt. 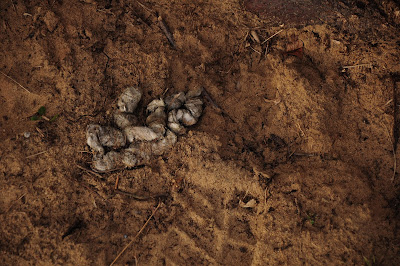 Suddenly the trial we were following split.  HM.  We were already heading further east than I really wanted to go (again, this was all new territory to me, and I didn't want to end up miles from home after dark).  So, we took the branch that headed downslope and northward.  I had a rough idea (hope) that this would come out (eventually) at the far side of Tucker Lake, which I had visited last spring in search of whip-poor-wills. 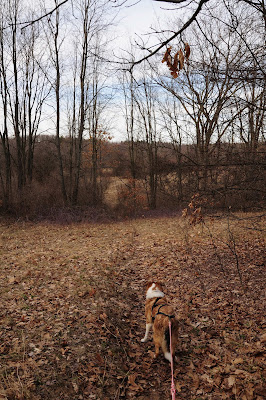 Well, we walked.  And walked.  Thru tangled shrubs, across fields (field dog training sites, apparently), into a soggy bit of ground, and up two very steep slopes.  At the crest of the final big slope my hope proved sound:  here was the trail we had walked last spring.  Heading back down it, we soon came to the parking lot - hooray!  Now I knew where we were. 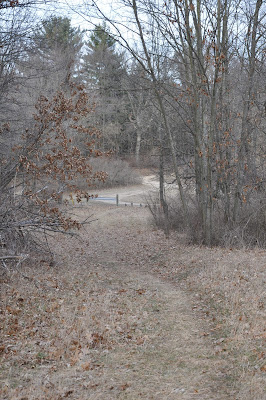 We came out on a dirt road - most of the roads here are dirt roads.  Thanks to the recent lack of rain it was in pretty good condition. 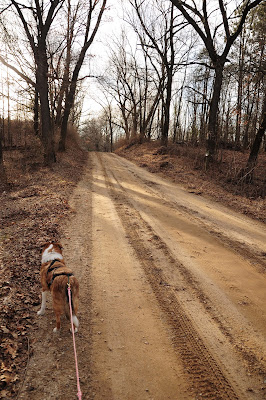 I confess I was a little surprised to see this pool of water still covered in ice.  It is difficult to recall on sunny warm days when the chorus frogs are singing that a mere three to four days previously the snow was flying and it barely got above 20 degrees. 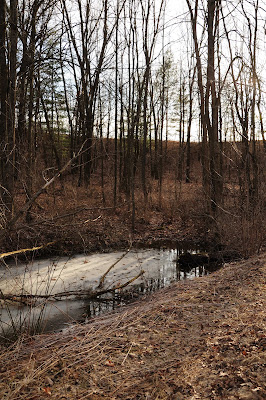 The back roads of this part of Michigan are dotted with all these lovely old farms.  The old barns are beautiful, even though most of them are in various stages of decay.  How I'd love to have one of these beauties on my land! 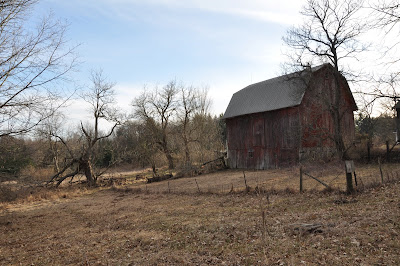 The old equipment is slowly being reclaimed by Mother Nature. 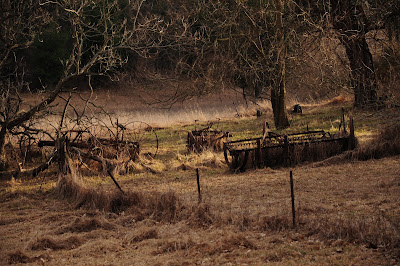 But can't you just picture a bunch of chicken walking around, pecking the ground, in front of these buildings? 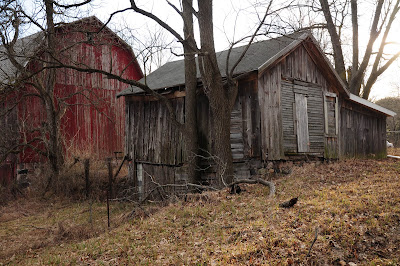 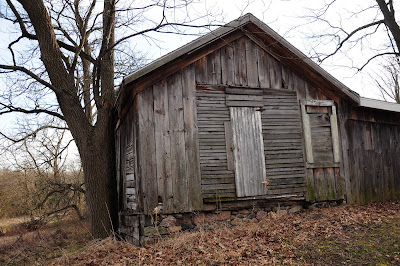 We still had about a mile and a half to go before reaching home, so there wasn't a lot of time to dally.  While I really enjoyed our wander across acreage new to us, I was nervously watching the sun set.  At this intersection I knew we had 0.7 miles to go - a short jaunt. 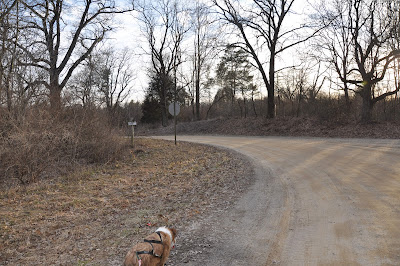 When we got home, I discovered we'd been out about two and a half hours.  Not too bad.  We must've covered over three miles, thanks to our aimless wandering.  Somehow, though, it seemed more like five!  Both of us were ready for a good long drink of water.

On the way home we listened to a killdeer calling as it flew over the fields, and after dark, the woodcocks started peenting.  Spring is poised to spring.
Posted by Ellen Rathbone at 10:53 AM