Cuter than a Baby Raccoon

Another evening walk sans camera.  Will I never learn?

We were headed down the road, Toby and I, when I heard a rustling in the shrubs and trees to our left.  I figured it was a rabbit or woodchuck getting off the road (see them a lot).  But then I saw some branches bobbing up and down.  I stopped, looked, and there precariously balanced on a very thin branch, was a baby opossum!  It was eating some berries that were on the shrub in which it was perched. Further investigation yielded a second baby in the tree next to it.  This sibling was much better hidden.

A baby opossum really is cute as a button.  It's silver white fur contrasts with the black tips on its ears.  The ears and tail are whole - no frostbite yet.  And they don't look all ragged and rough from age (not that 'possums live all that long in the wild, but after a year or two they are a bit scruffy-looking).

All was well, everyone foraging in peace, until Toby also spotted them (probably wondering why I had stopped walking and what I was staring at in the woods).  As you can guess, he started to bark.  The second 'possum immediately dropped from its perch (whether because it was making a hasty departure or because it fainted, I don't know), while the first one just froze.  It kept its beady eyes on us and just sat there for several minutes.

I finally got the dog quieted down, and we watched for quite a while (I'm sure passing cars were wondering what the heck this person crouched on the side of the road staring into the woods was doing).  Finally the little fella decided a departure was in order.  It turned around and headed for the trunk of the shrub.  Toby and followed suit, standing up and continuing our walk.

Did I mention we also saw an indigo bunting and another dragonfly perched in perfect silhouette on an old mullein stalk?  Yep - I should start taking the camera back out on our walks.

But, just so this isn't a total photoless post, here's a shot of what I did this last weekend, when it was over 100 degrees: 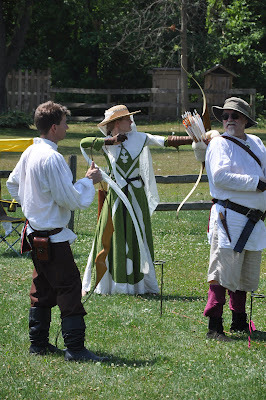 No, that's not me - I'm the one behind the camera.  But I was there, in full SCA garb (sweat literally pouring down my body), trying my hand at archery once more.  It's been nearly 20 years since I was in the SCA, but work (of all things) has gotten me in touch with the local groups, and the fine folks at the Barony of Cynnabar (Ann Arbor) invited me to come play with them.  I'll be off again this Sunday for an archery event with them:  Smurf Shoot.
Posted by Ellen Rathbone at 12:04 PM