A Little Bit of Rain

We had a whopping 1/10" of rain yesterday morning - a near flood!  On the way to work the evidence of this precipitation event was clear:  frogs by the dozens were hopping across the road (interestingly all going in the same direction).  Unfortunately, they chose to do this during the morning rush hour - there was no way to avoid them.  :(

Yesterday afternoon a "severe storm warning" was out, and the sky darkened considerably about 4:40.  There were some rumblings of thunder, and suddenly the heavens opened.  I walked out to the car in the downpour, reveling in the wet and the cooler air (it has been around 100*F).  As I drove home, I saw evidence that the rain, which had lasted maybe 10-15 minutes, had blown thru Jackson, headed eastward.  It dumped on Napoleon, but when I got to the ol' homestead, only four miles further east, not a drop had fallen.

I live in a bubble.

The heat and humidity was back on the rise, too.  (Today "they" are predicting a heat index of 110*F.)

When T and I got home from our brief evening walk (too hot and humid to stay out long), I found this lying on the front steps: 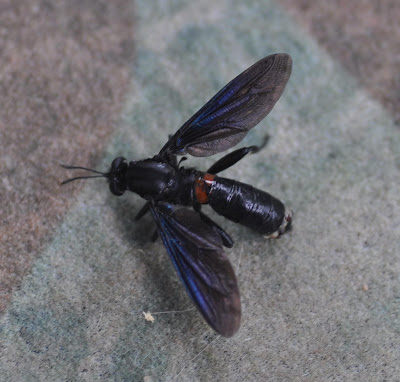 It was nearly dead, so I had a photo opportunity.  I put the dog inside and grabbed the camera.  I'd seen this insect before, but couldn't recall ever having identified it.  The red belt around the abdomen and the blue tinge to the wings were quite striking.

This morning I found it in my insect books:  Mydas clavatus, one of the Mydas flies.  Typically a southern and western family of flies, this is the only species in the family that is found in northerly regions, and it is one of the largest flies in general.

Despite its wasp-like appearance, it is harmless to people.  According to Marhsall's Insects - Their Natural History and Diversity, this species is commonly found along the Great Lakes, where it likes to nest in the sandy beaches.  That could explain why it is here - instead of real soil we have sand.

Another nifty note Marshall makes is that little is known about the lives of the adults other than they seem to be nectar feeders (although the larvae prey on beetles).  Could it be that this individual has been visiting my hummingbird feeders (there was one hanging very near where I found it)?

What caught my eye about this particular individual, besides its gigantic size and it's bluish wings, was the white "ring" around the end of the abdomen.  Upon closer examination, I discovered what looked like little seed pearls and small reddish-brown beads stuck to this area.  Could they be parasite eggs and the parasites themselves? 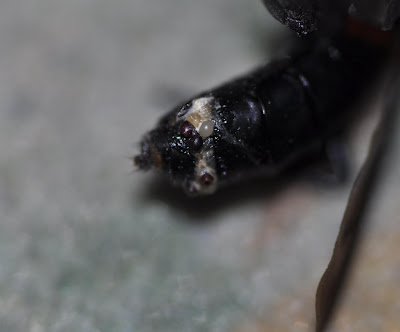 Not knowing the answer, I have sent a copy of this photo off to BugGuide.net to see if any of their folks are in the know. Stay tuned for updates!
Posted by Ellen Rathbone at 11:42 AM