Sunday was bright and sunny...but boy was the wind blowin' cold!  Brrrr.  Still, it was too nice to stay indoors, so I hooked Toby up to his skijoring harness and we headed down the road to the Sharonville State Game Area. 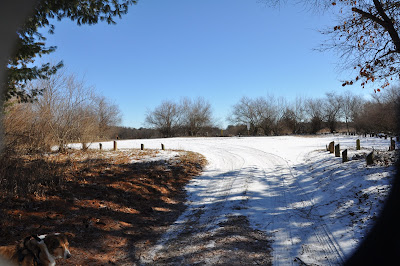 Michigan has these game areas around the state (several in my neck of the woods).  They are set up primarily for hunters, so for a naturalist they aren't necessarily great places, primarily because they are not managed for natural features.  In other words, there are LOTS of invasive species.
It also explains why there are so many deer. 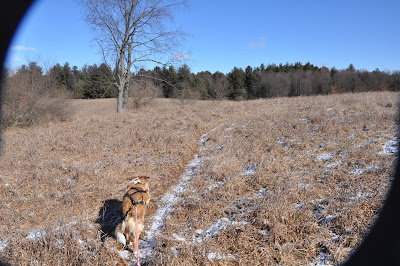 The landscape was really quite barren.  With all the brush and tangles (mostly honeysuckle), one would expect to see a lot of nests and hear a lot of birds.  Nada.  The only thing that was interesting for the longest time was this bit of snow stuck to the stem of a leaf. 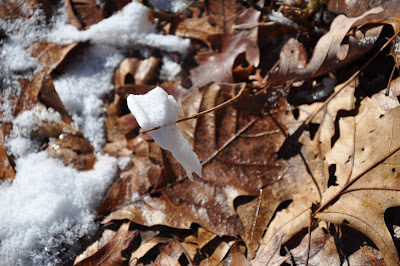 Some enterprising soul built a three-walled fort.  Dollars to donuts it's a deer blind. 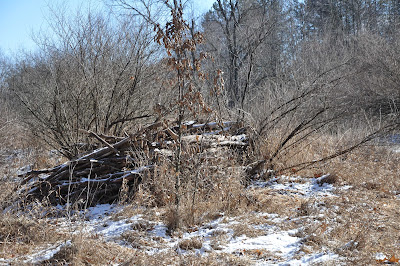 Now if you are like me and have a thing for trees with fabulous shapes, then Michigan is the place to be.  This is the land of the oak tree and in the fall, winter and early spring, the bare branches and contorted forms are incredible to see. 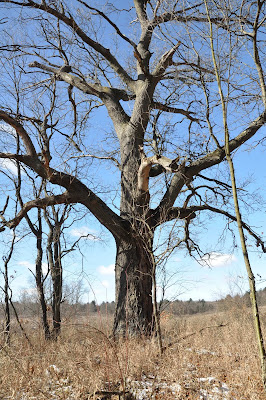 Being a state game area, this chunk of land is not laid out with a trail system per se.  There are lots of herd paths, although I couldn't tell you if they were formed by the hunters or the hunted.  Some of these have been in use for so long that they have eroded some serious ruts in the ground. 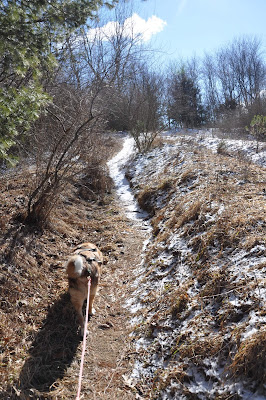 After walking along what I would've sworn was at one time a road, we found ourselves back on a herd path that finally branched in three different directions.  The winding path that headed down this slope seemed the most intriguing - it went to the lake/pond. 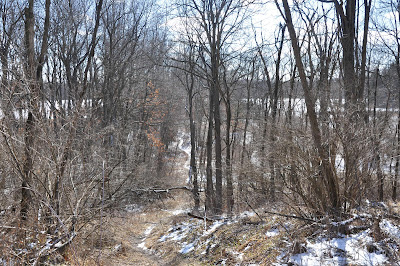 In the summer I hear cranes calling from this direction most evenings.  There are two small lakes (or large ponds) here.  This one, I discovered is posted.  Must be one of the neighbors owns it.  That little dark spot just left of center is a muskrat lodge.  Since it was posted, I didn't go down to explore further (darn!). 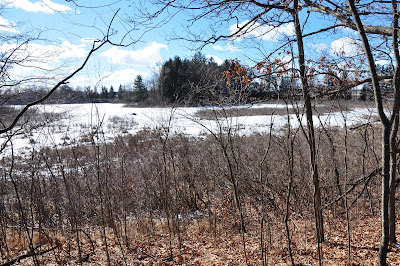 Why is it that hunters don't take their spent cartridges with them?  I could understand if they couldn't find them, but the bright red and yellow shells do stick out on the brown landscape. 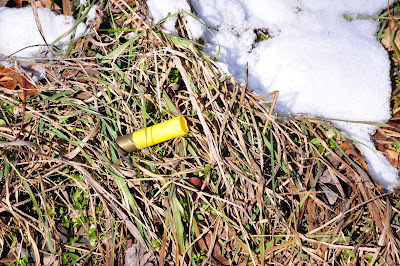 Toby and I ended up spending about an hour and half wandering around.  He got lots of sniffing in - probably deer, rabbits and the markings of other dogs (wild or domestic).  The time we get to spend out in the fields and forests here is so limited:  late spring into fall is tick seas