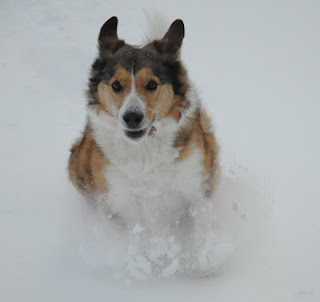 It's never easy letting those we love go.

Last week Toby starting going into decline quite rapidly.  Stairs had become his nemesis, and there are stairs everywhere at our house.  His nether regions had become extremely weak, and going up and down stairs was a recipe for a tumble, head- or tail-first.  Even during our twice-daily walks he was stumbling and falling, and getting back up on all fours was a challenge.  Hearing was going, and I believe sight was going, too. Friday night he turned his nose up at his cheese snacks...and normally he would do ANYTHING for cheese!

So, on Saturday we took our final trip to the vet.  Tears galore.  But his passing was peaceful, and he is now reposing near the sugar maple out behind the house.  Come spring, I will plant a little native plant garden above him.

On Sunday I realized just how much he filled my life, for the house, even with two cats, now seems SO empty.  And quiet.  I had kept up a constant chatter with Toby - he was my roomie.  Now there are no conversations.  No one to share meals or to help clean the dishes.  And evenings (all three so far) I find myself preparing in my mind the schedule (let T out, fix and eat dinner, go for walk) only to remember that that is no longer the routine.  Taking off shoes, changing clothes...all those little things we don't think about are no longer important.

Sunday afternoon I couldn't take being in the quiet house any longer, so I went "shopping" - had to get some caulk for windows and doors.  I was browsing through the patio furniture at the store, thinking how nice it would be to have a table and chairs on the back deck, or a fire ring in the back yard...and then I realized I have no one to share these things with.  It's no fun to sit by a "campfire" on a summer evening if there is no one to sit there with you.  Ditto eating a meal on the back deck - although with T we usually just sat on the back steps.

I actually found myself at the animal shelter in Ann Arbor yesterday - desperate for a dog to fill the silence.  Lots of sweet pooches - many pit bull mixes - but the only one who "spoke to me" was a little mix-breed called Biscuit, who does not like cats apparently.  That wouldn't have worked out.  Sat with an enormous German shepherd called Panzer for a while, but he ignored me entirely and piddled on the floor.  I don't think he would've been a good fit - just too too big and apparently really has issues with other dogs (although cats are fine) - and the neighborhood is full of dogs running loose.

So, I find myself enduring the silence of the house.  The cats are, well, cats.  They interact on their own terms.  I have the bed mostly to myself now, too.  It means I get better sleep (three animals tend to push one to cling to one side of the mattress), but I miss the presence of so many warm bodies.

Toby was about 14 years old.  In three weeks we would've celebrated 11 years together.  He came home with me completely unplanned that warm April day in 2002.  I was at a commissioner's meeting at the APA headquarters in Ray Brook (NY), and on the way back to work I stopped at the animal shelter on a whim.  No intention of getting a dog - just window-shopping for our seasonal.  And there he was:  the only quiet dog in the kennels, lying there with his head on his paws looking so sad.

I asked the staff what his story was.  A woman had gotten him as a puppy.  She had some young kids.  After about three months he was tied out back and there he was for the next three years.  At least once he broke loose and had been hit by a truck.  The current boyfriend had brought him to the shelter to be put down because he was "dangerous" - claimed he had bitten him.  So, he was put into quarantine and the day I was there he had just come out.  He was due to be put down the next day.

I took him out for a walk.  He was in sad sad shape.  Fur greasy, and he had diarrhea, so he was a mess.  He cowered as we walked and cringed, tail tucked, when I went to pet him.  Afterwards, we went into the meet-n-greet room.  I filled my hands with water at the sink to give him a drink (it was unseasonably warm out), and when I turned to offer it to him, he hit the floor in complete fear.  He had been punished with water.

I took him home.

I remember taking him in for his first vet appointment (to be neutered) and the vet recognized him.  "Oh, God," she said.  "He's back."  A year later she told me it was hard to believe this was the same dog - a little TLC, good food and training had turned him into one of her favorite patients.

And that's what it was - months of training and working with him, making sure he had good food and exercise, and lots and lots of love.  The latter went both ways.

Toby was my best friend, and I miss him terribly.  But it was time - his quality of life was gone and as difficult as it was to say goodbye, it was the right thing to do.

Will I get another dog?  I don't know.  Not having to rush back home to let the dog out will free up my time...will certainly make my employers happier.  But I find that already I miss the companionship.  I don't have my hiking buddy any more.  On the other hand, MI is not as friendly to dogs as the Adirondacks are - too many natural areas say "no dogs allowed."

Only time will tell.  If another dog comes along who desperately needs love, I just might say, "C'mon - let's go home."
Posted by Ellen Rathbone at 11:45 AM

Email ThisBlogThis!Share to TwitterShare to FacebookShare to Pinterest
Labels: Toby