Ebony jewelwings (Calopteryx maculata) are stunning damselflies that we often find in the woods here, not too far from water (they like slow-moving woodland streams).  Their bodies are metallic green or blue, and their wings are black as black can be.  The females sport a single white dot (the stigma) on the tip of the wings (these are all males).  There's no other North American damselfly that looks like these. 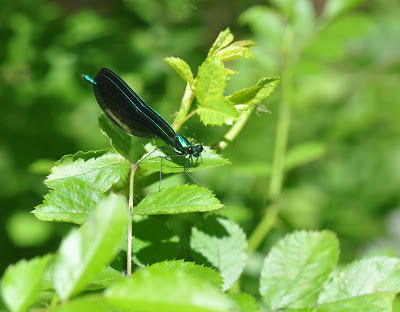 The males arrive on the scene first.  It could be that since on the day that I took these photos I only saw males, and today I saw several females in the same location, that the females have just recently arrived in our woods here at work.  This particular location is near the small stream that runs through the property. 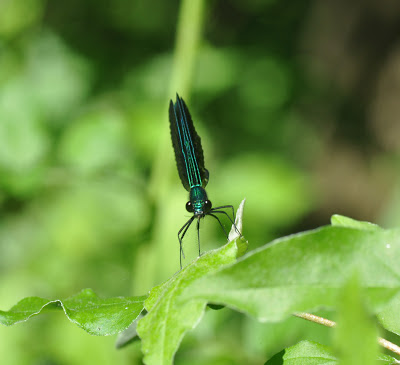 These lovelies live a mere 2-3 weeks, and 11 of those days they are not yet mature enough to mate.  When it is time to mate (and this is really cool) the male lands on the female's stigma (the white dots) and then walks down her wings to reach the position he needs to join with her and form the "tandem."  Does he land on the stigma because they are obvious, or are are the stigma obvious in order to provide him with a perfect landing spot?  It's the old chicken-or-the-egg question all over again. 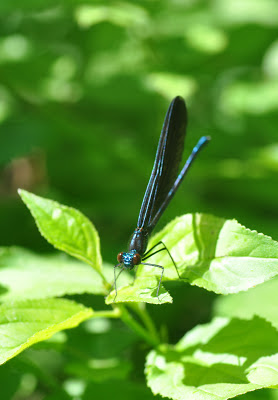 I was pondering recently about the coloration of these insects.  Are there some that are blue and some that are green, or are they all green, but only appear blue in certain light (or light angles)?  I suspect it is the latter, if only because one of my dragonfly books refers to ebony jewelwings as green and black in color, although they "often look blue."

These insects are difficult to photograph - they never want to sit still long enough for you to focus and shoot.  I continue on my quest to get a perfectly focused image of one some day (although these aren't too bad).
Posted by Ellen Rathbone at 6:25 PM

Email ThisBlogThis!Share to TwitterShare to FacebookShare to Pinterest
Labels: damselflies