We had a spate of warm (to me "hot") weather at the end of last week - in the 70s!  This meant the woodland flowers should be popping.  So Sunday morning I headed out to Nan Weston preserve to see what might be up.  I made this trip primarily as recon for a group we are taking out there on Tuesday.

It's been a cool spring, so things are delayed a bit...and the lack of moisture hasn't helped, I'm sure.  On the plus side, I got to see some flowers at peak (Dutchman's breeches), while most stuff was only juuuuust getting started.

These bloodroots were tightly closed when I arrived, sometime between 9:30 and 10:00 AM.  The air was cool but pleasant, and there was a good stiff breeze blowing.  A storm was on its way, so I wanted to be sure that I kept an eye on the sky and got out before it arrived.  Turns out I had plenty of time - the storm didn't arrive until late afternoon. 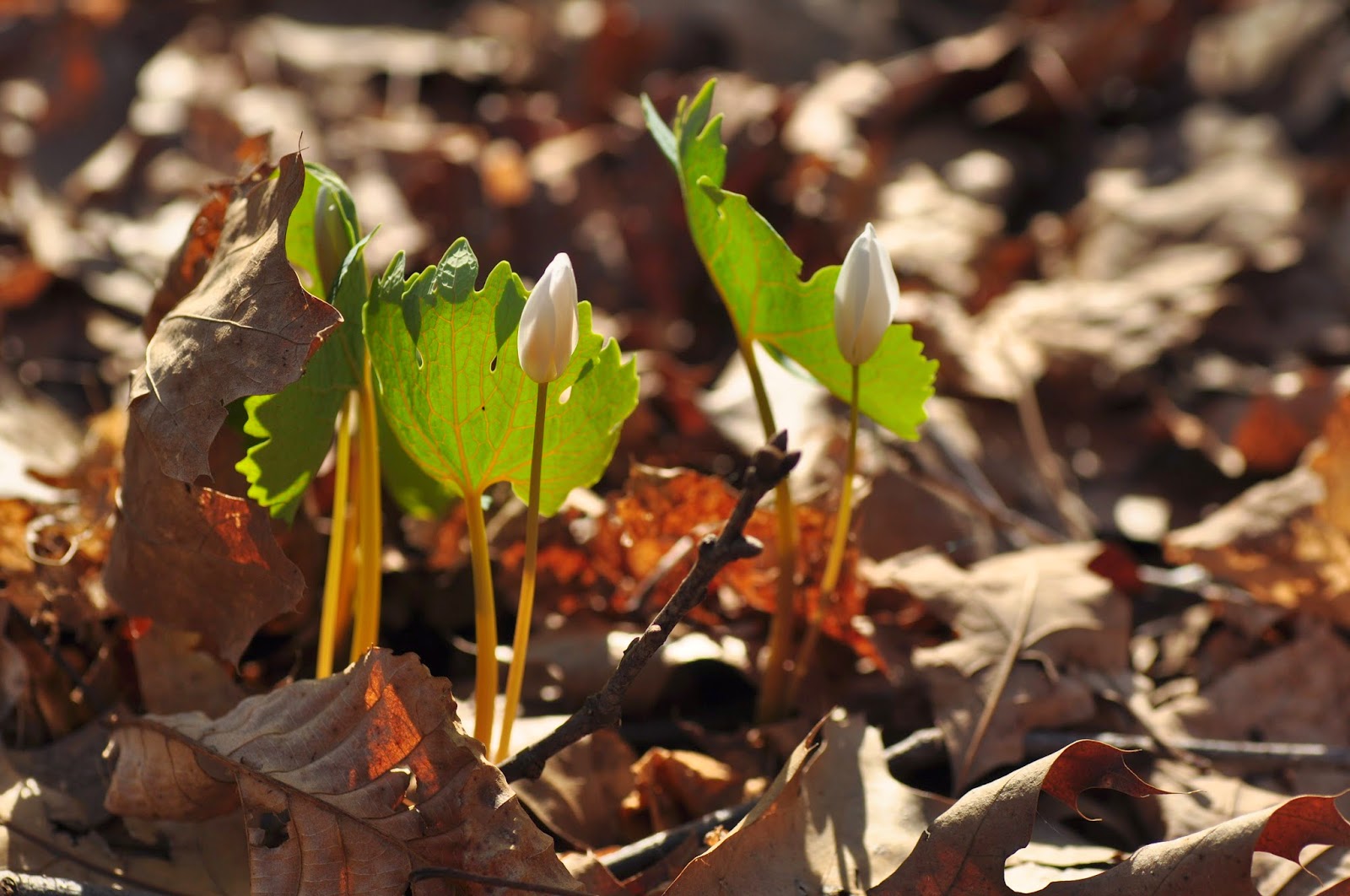 Most of the rue anemone were also closed when I arrived. By the time I left, most were open. 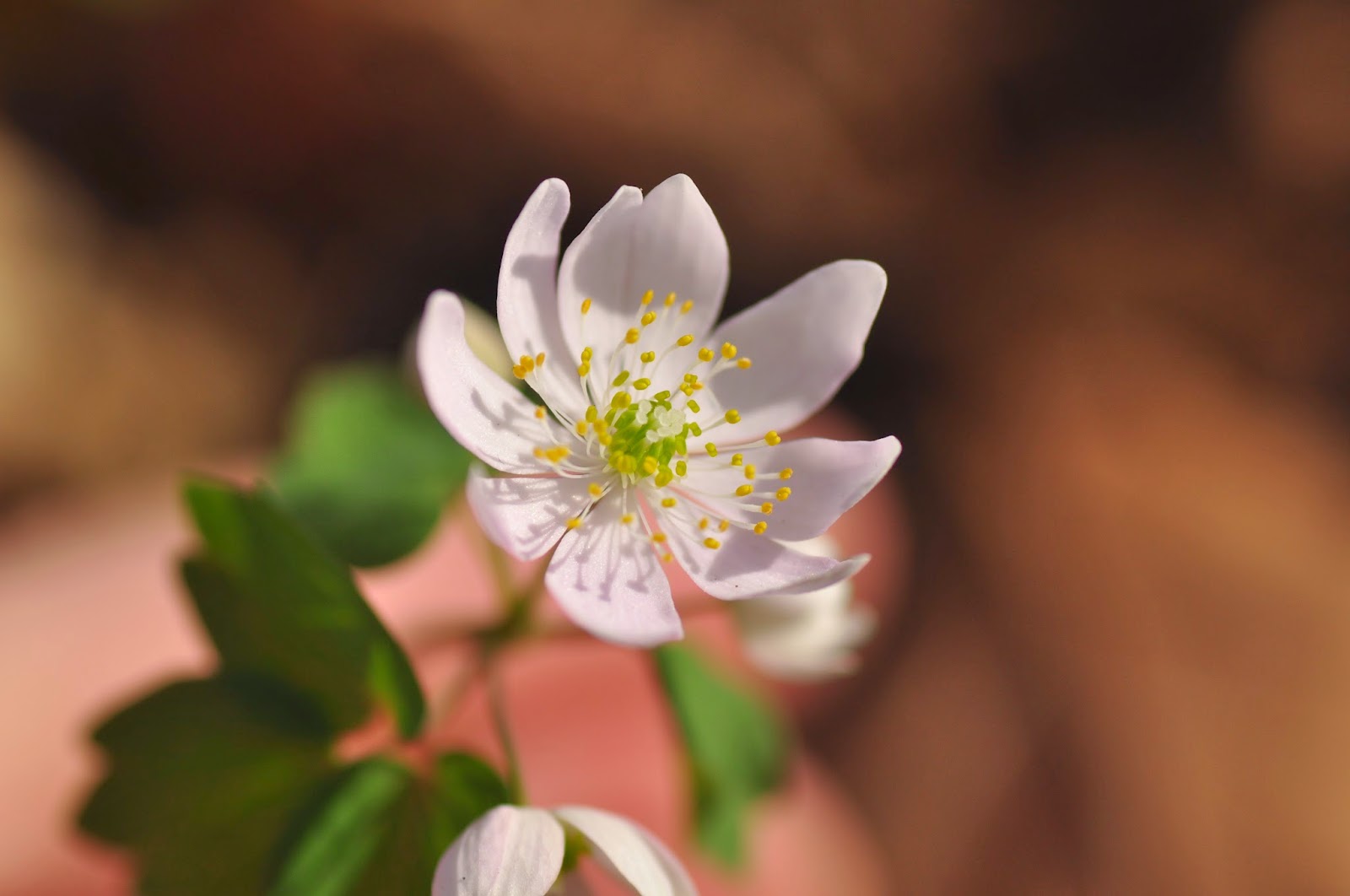 This was the most advanced trillium bud I saw.  In another week or so, the forest floor will be carpeted with these beauties. 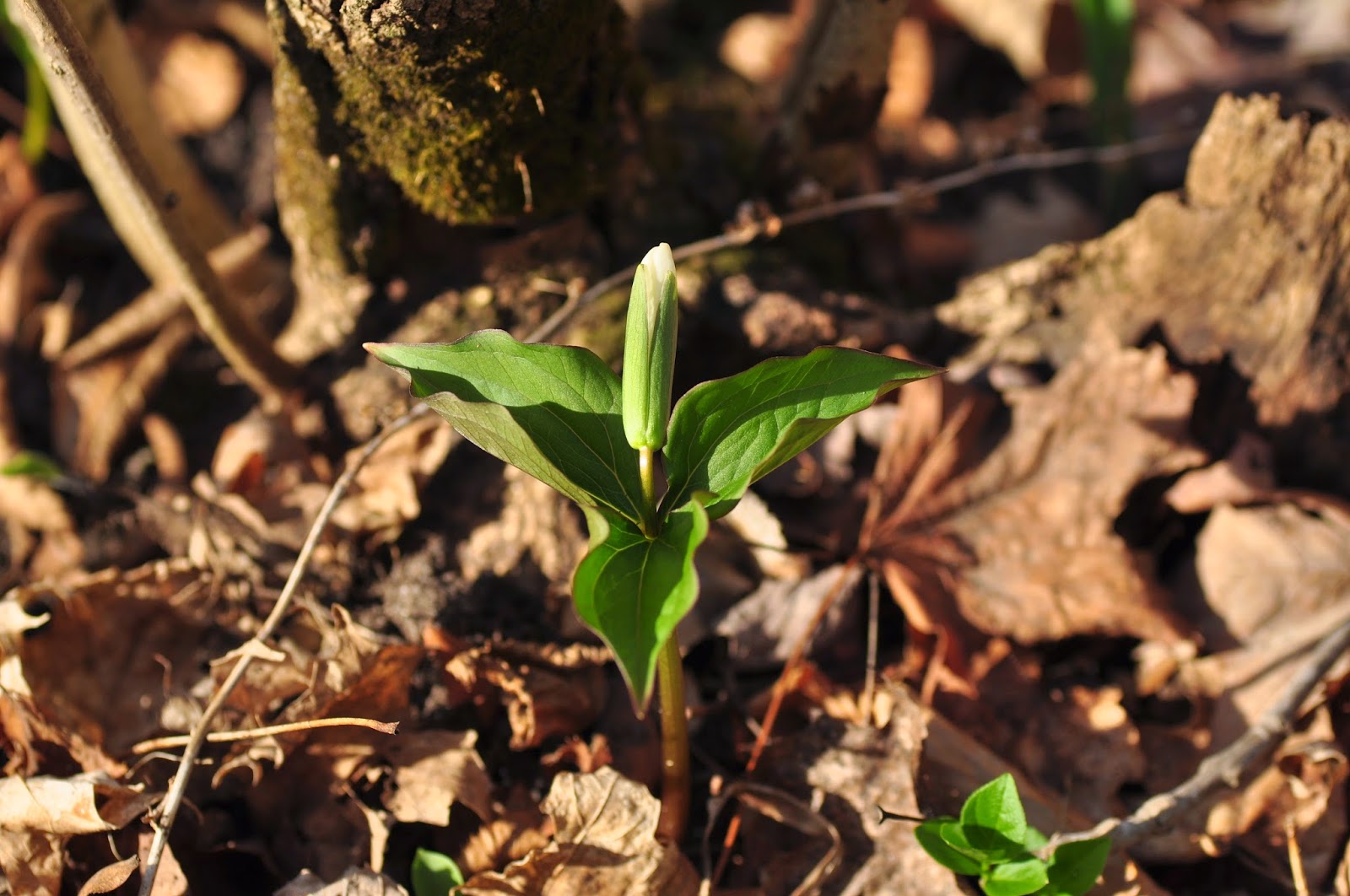 The blue cohosh was just getting going, too.  Most were still unfurling their leaves and were holding their buds closed.  It's such a delightfully odd flower, color-wise. 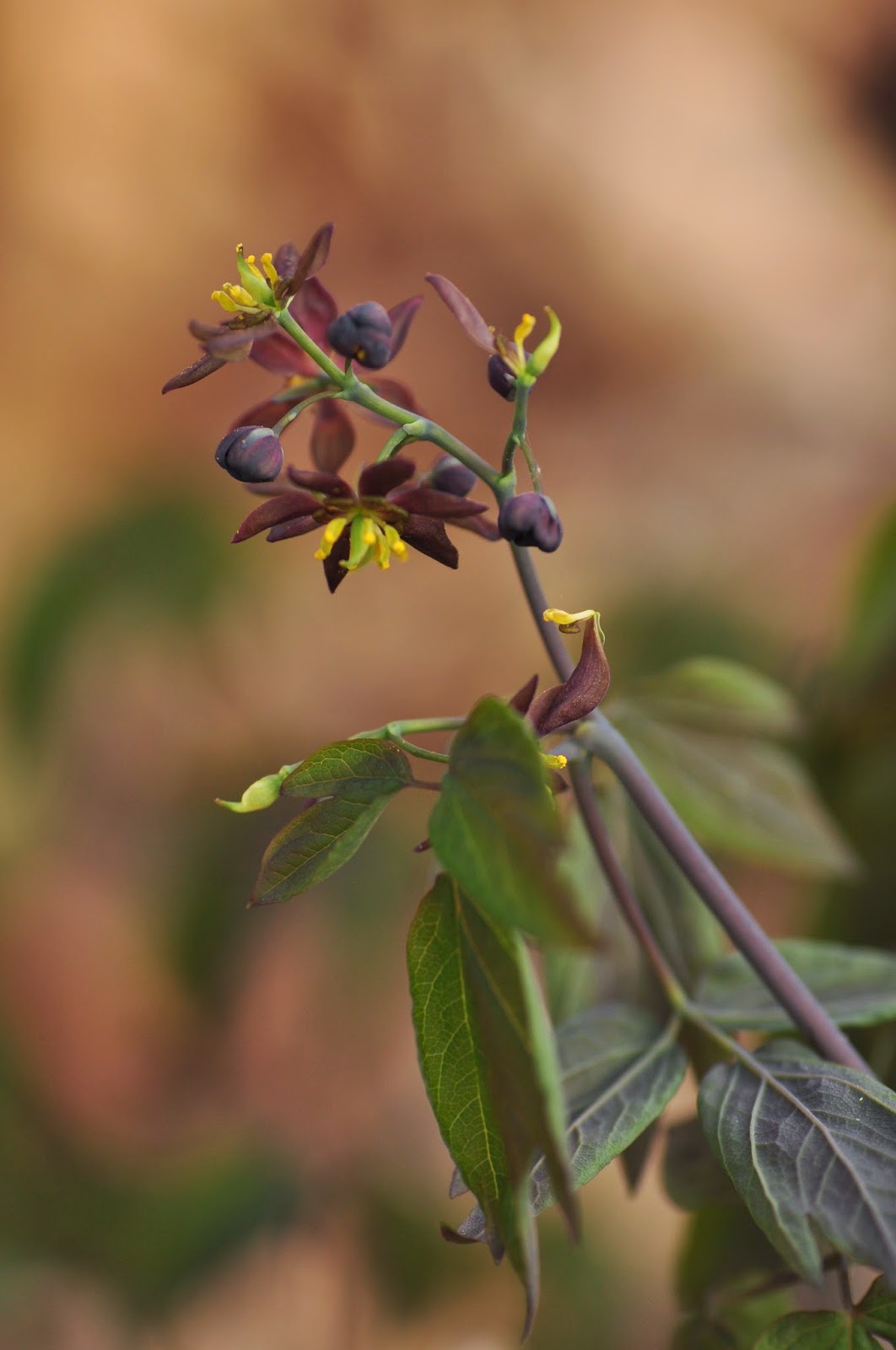 Not too many spring beauties were open yet. 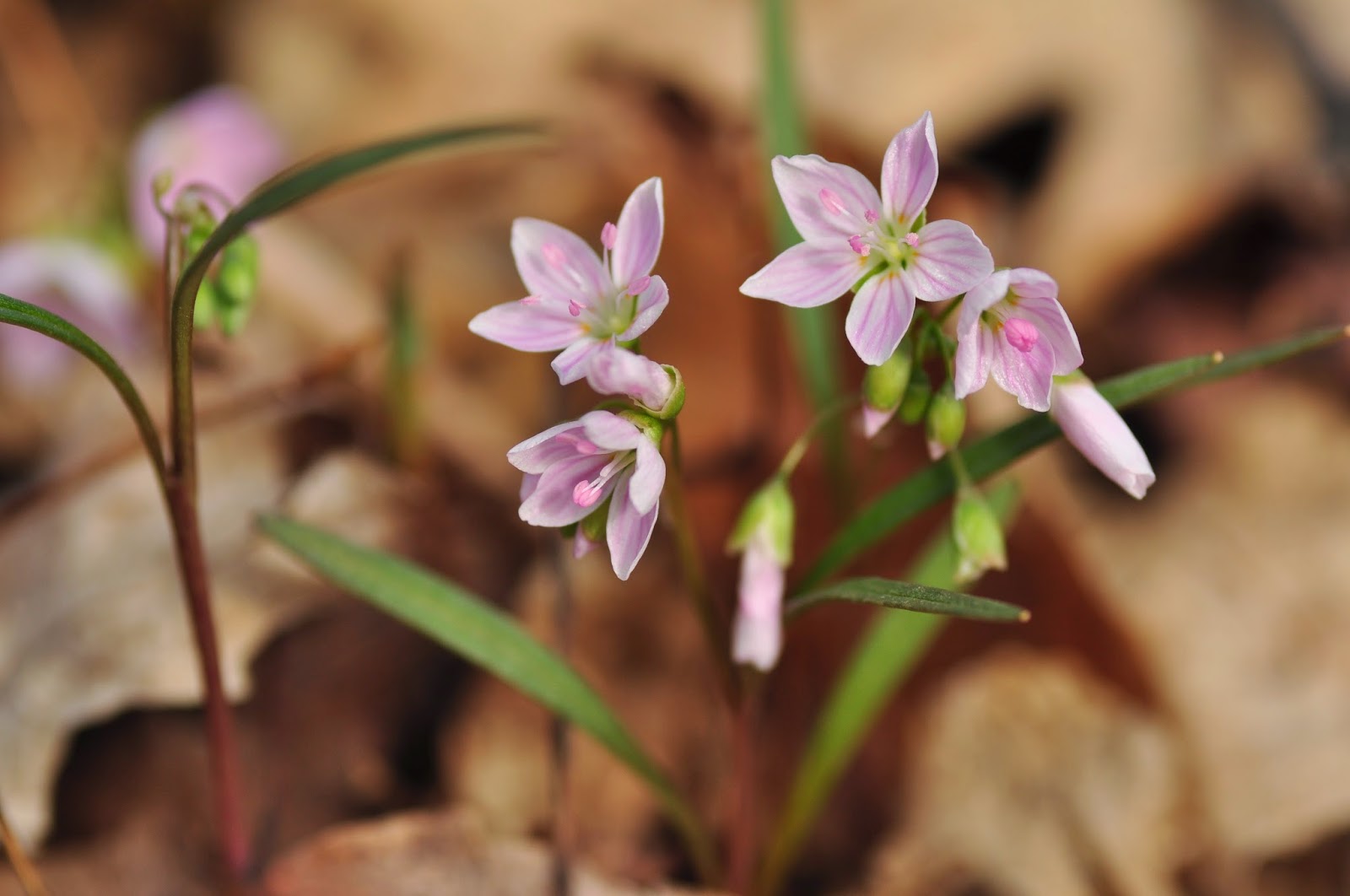 These yellow-flowered sedges (?) stump me every time.  I think it might be Carex ericetorum, which is a non-native species, considered a rare spring sedge in Europe and Asia.  It's all over the place at Nan Weston, which is noted as being a haven for native plants and has hardly any non-natives. So, that ID may be wrong.  I'm sure many of these plants look very similar. All suggestions welcome. 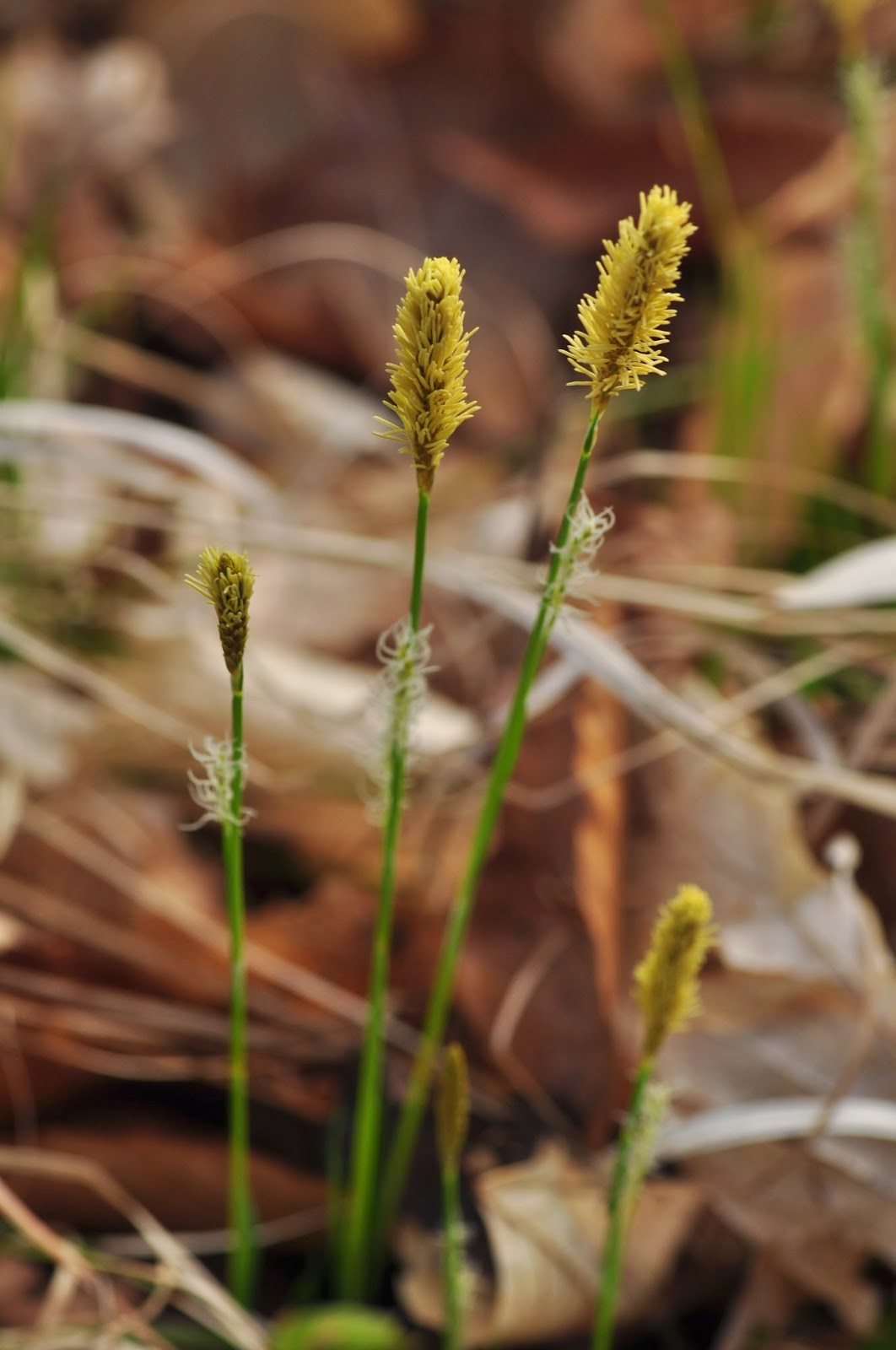 The leatherwood was at peak bloom.  All the shrubs were completely decked out with their clusters of yellow flowers. 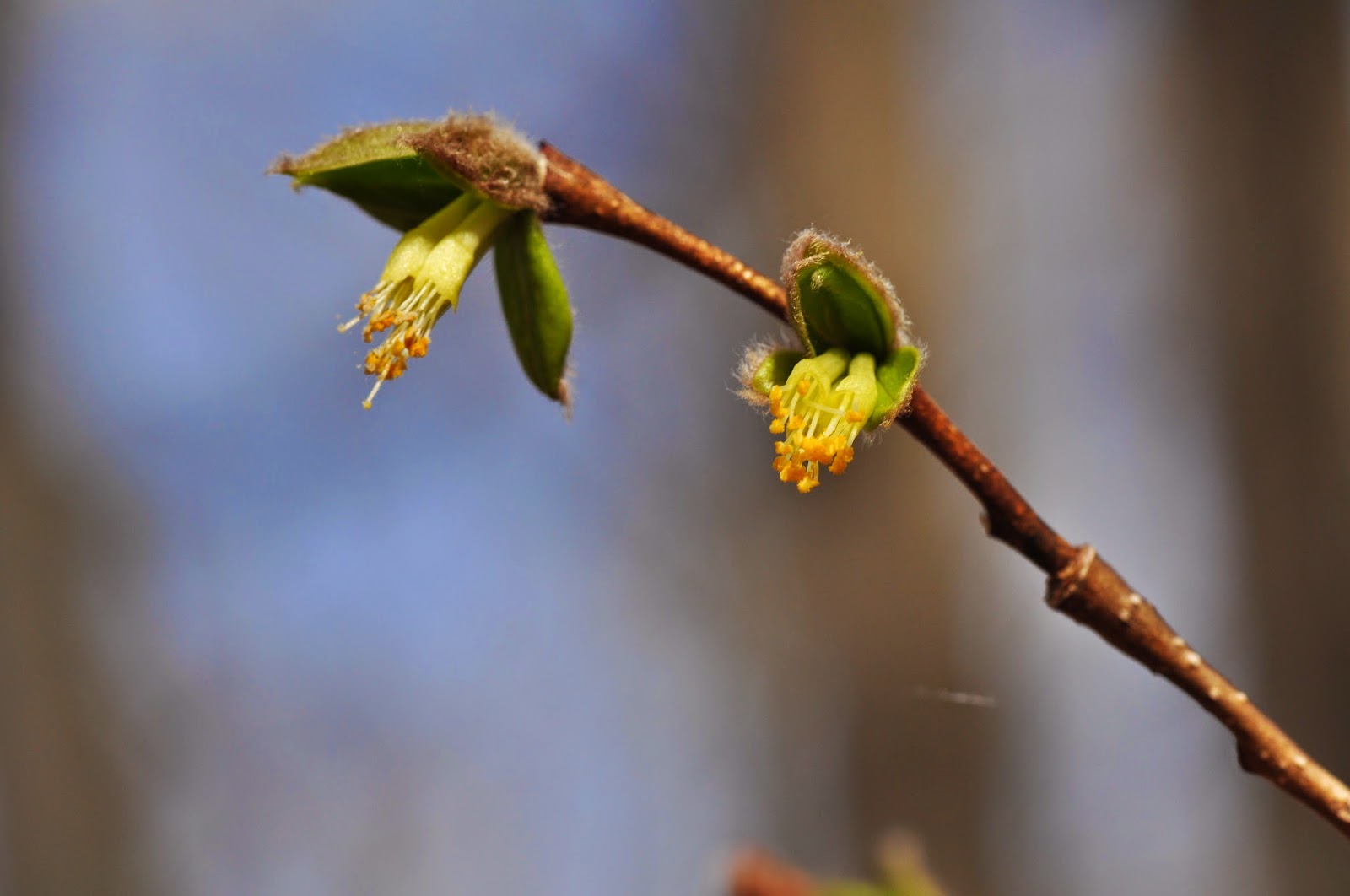 Finally found some round-lobed hepatica in bloom.  The few blossoms I saw were all faced away from the sun (and my camera). 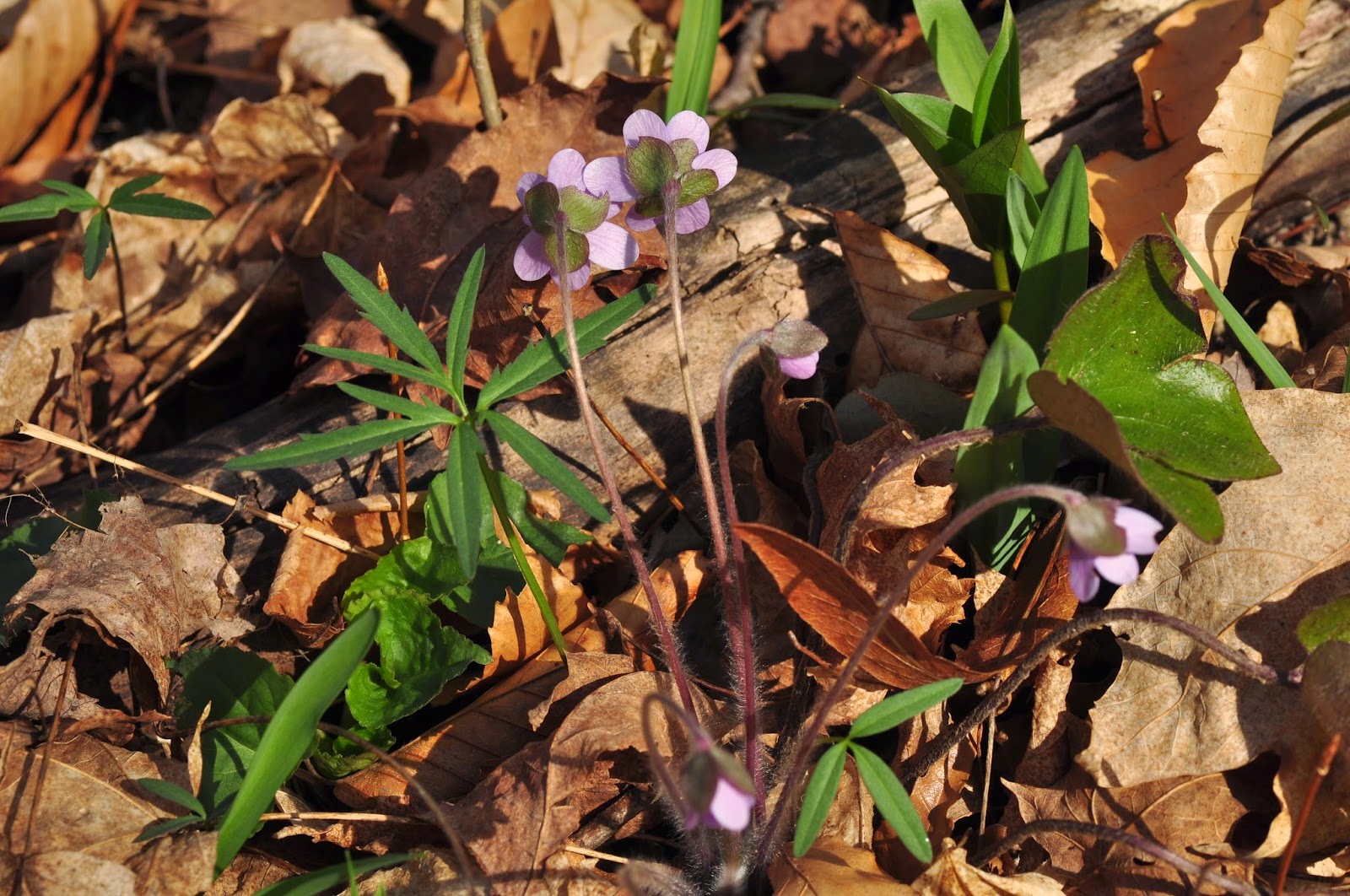 Here's my little friend the bee fly.  I love these guys, and they were all over the place.  Devilishly tricky to photograph in flight, and even when they land, they often don't stay put for long.  They are important pollinators, and boy, were they out doing their thing Sunday morning! 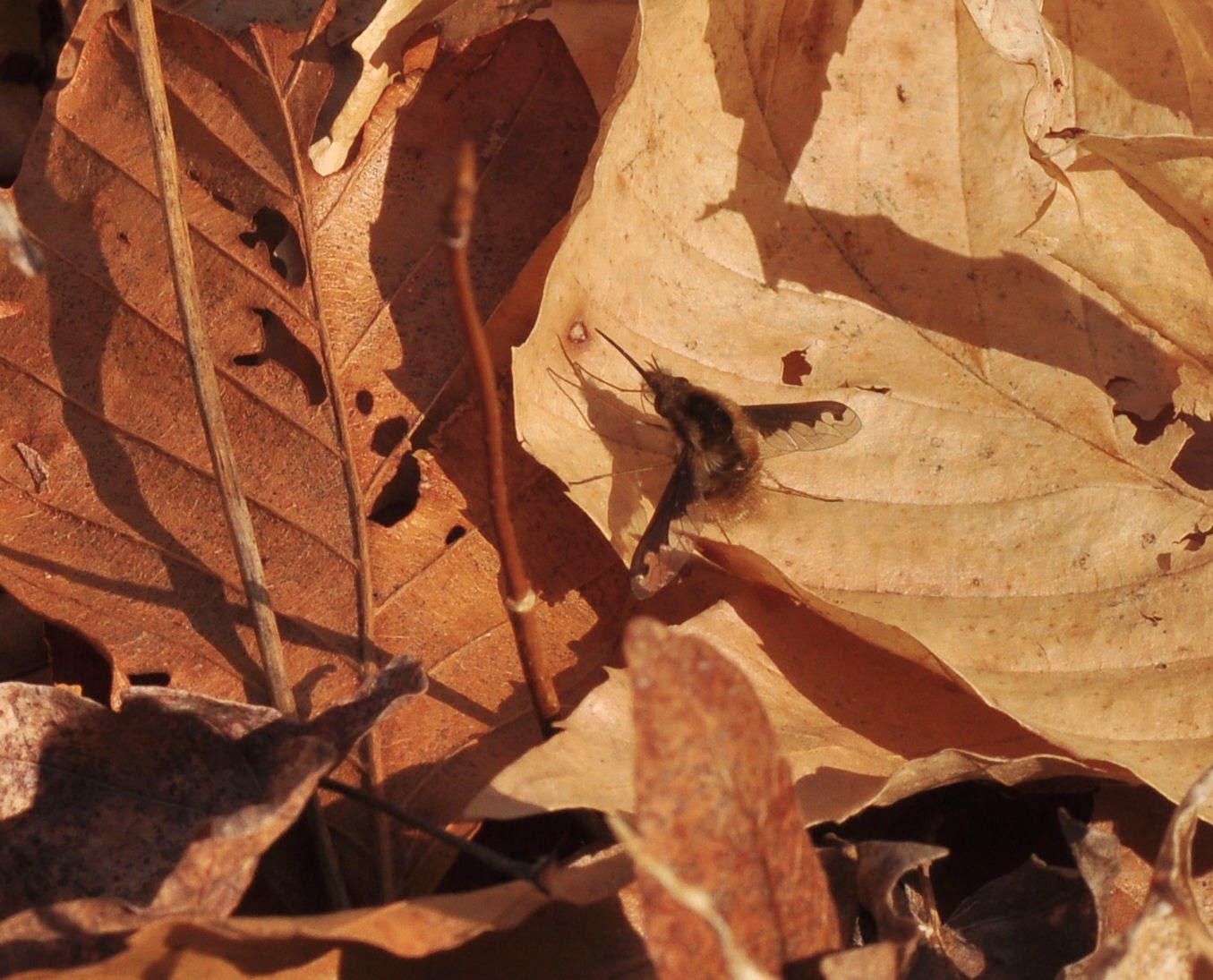 Another insect I was able to photograph was this beetle.  I'm in a library as I write this blog, and field guides are not their thing, so I'm at a loss to ID this critter, but off the top of my head I'd say it's one of the click beetles.  Will try to find time at work this week to get it identified better. 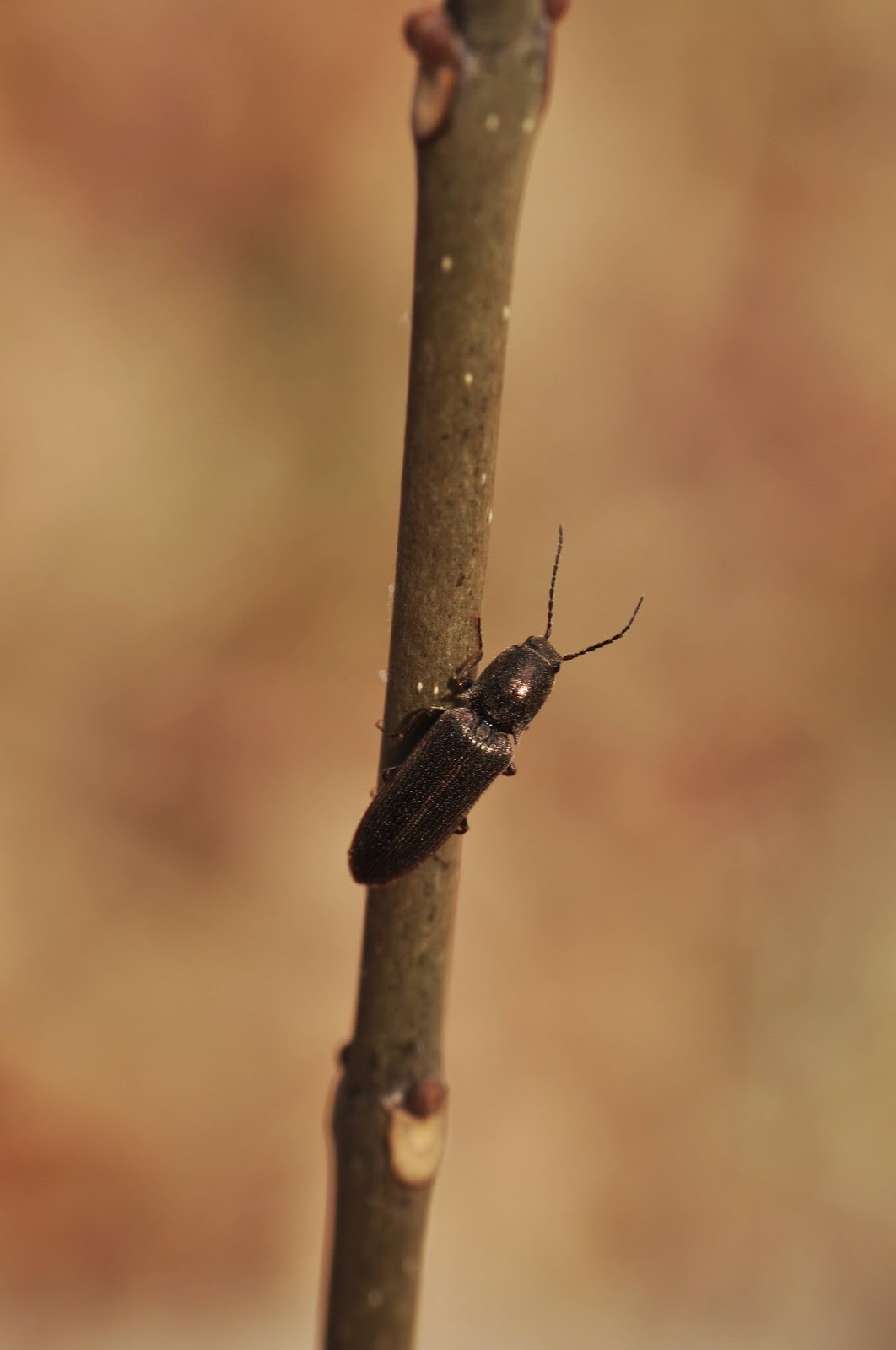 My other insect for the day was this lovely syrphid fly.  It landed just long enough for me to snap a shot. 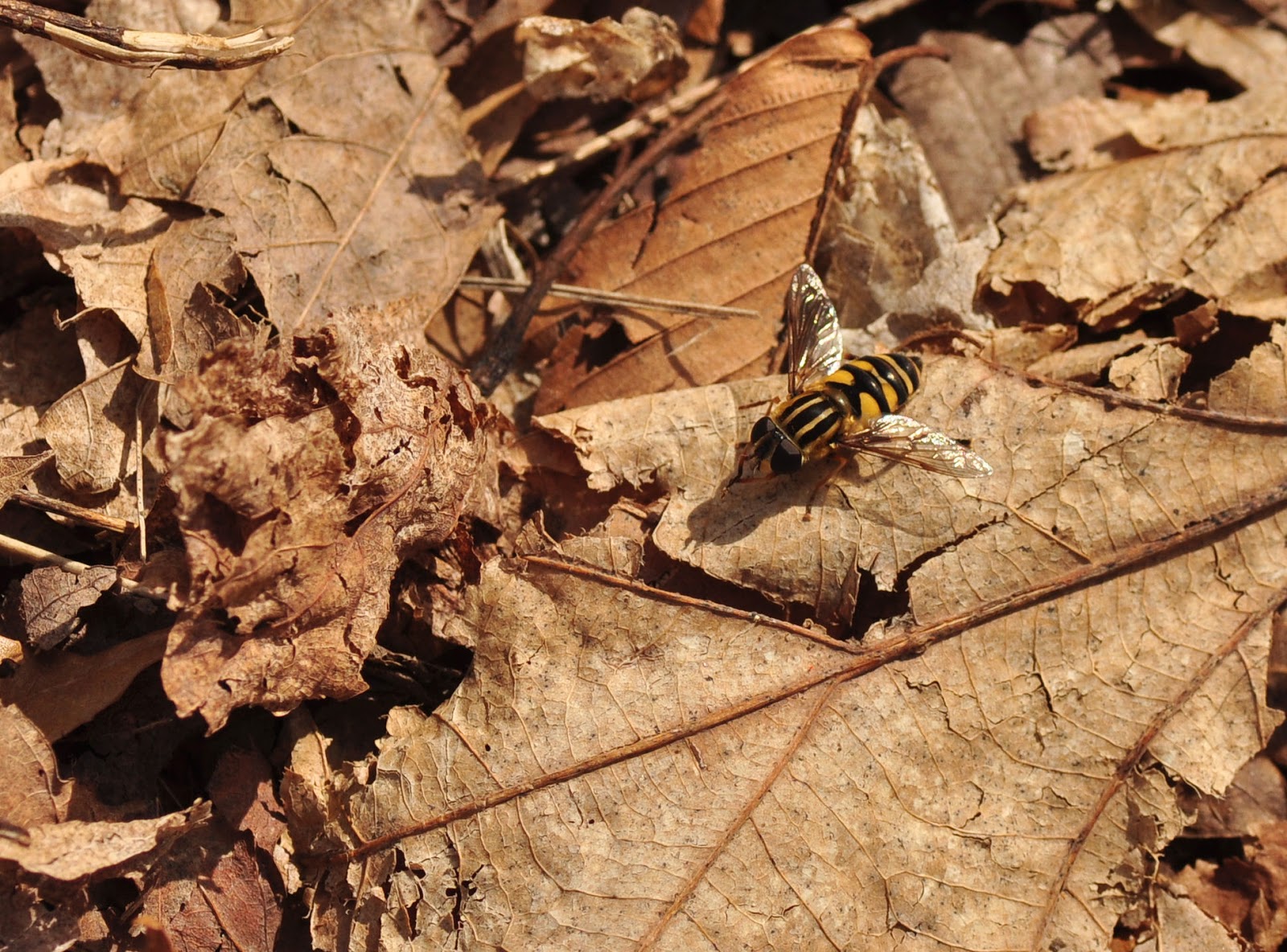 Purple cress was another flower that was just getting started.  This was a new plant for me last year, so I had to look it up on last year's blog to remind myself what it was.  Lovely. 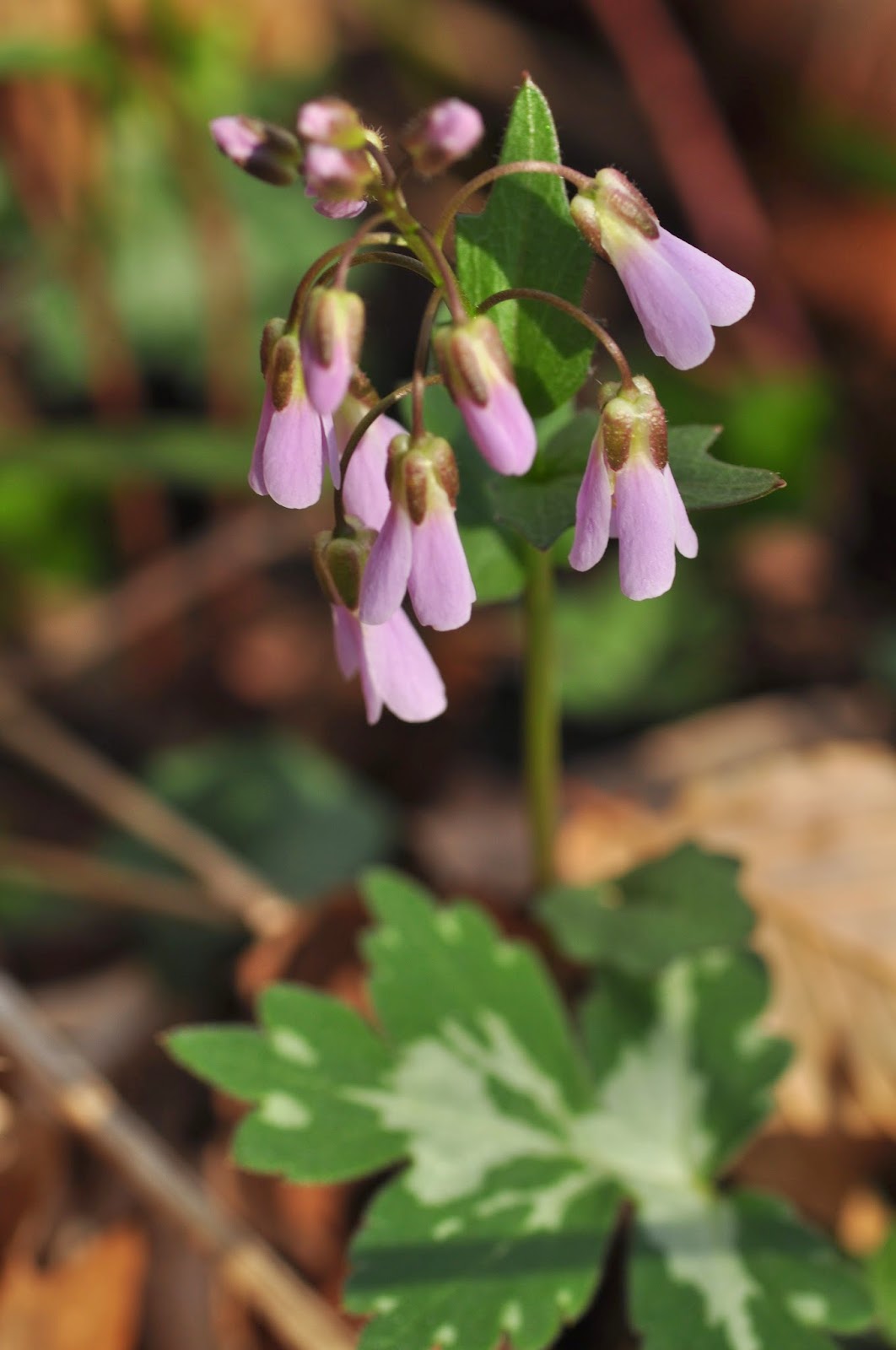 As I mentioned earlier, the Dutchman's breeches were about at peak.  So many in bloom, and many more in buds.  I usually get to Nan Weston after these flowers are past peak and looking pretty ratty.  How wonderful to hit them when they are at their best! 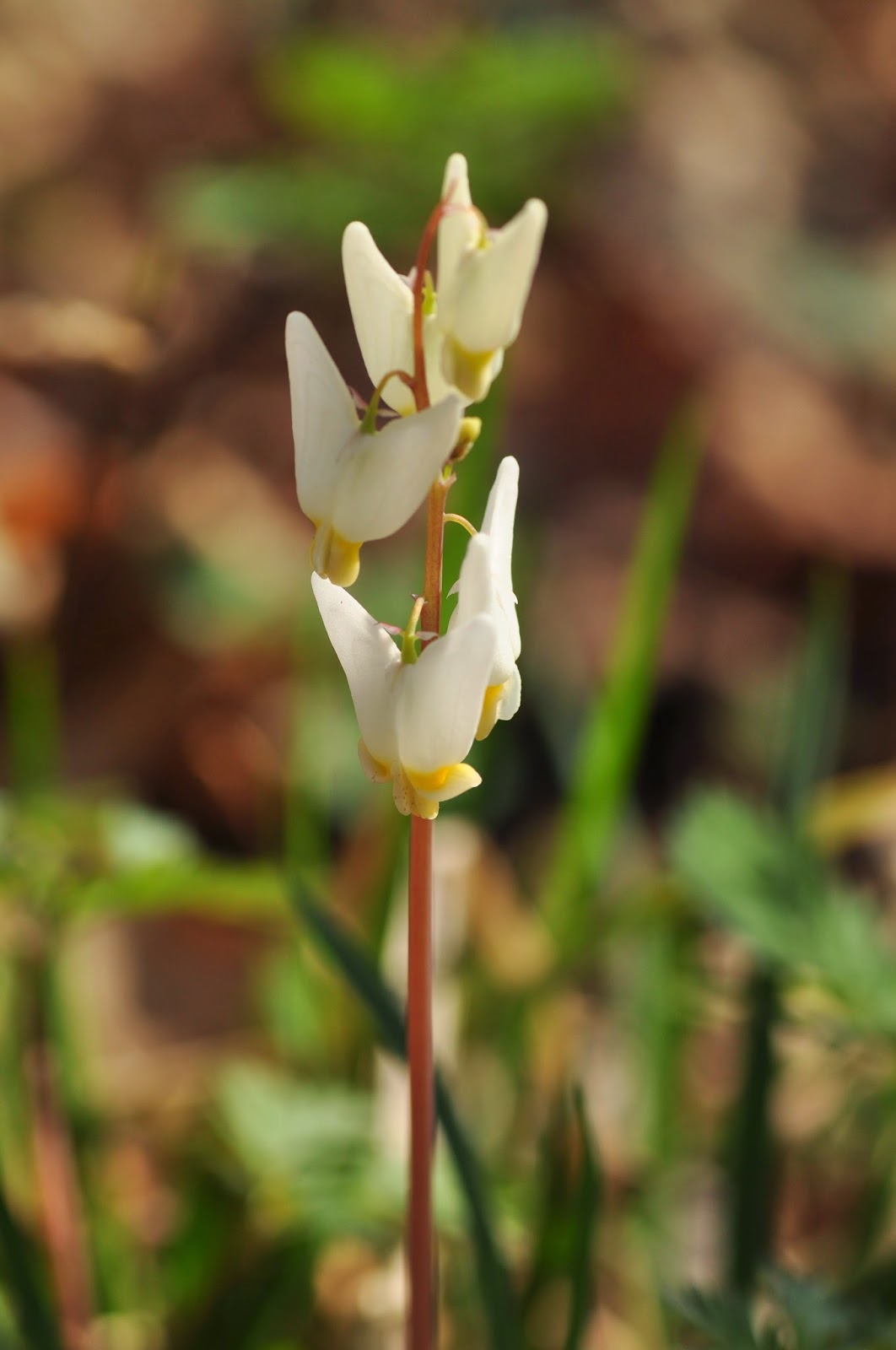 I wasn't the only nature nut out yesterday morning.  There were four other cars in the little "parking area" when I arrived, and another two drove up as I left.  This fellow was a pro - he had a reflector for the light, his little tripod, a shutter release...all he had to do was battle the wind.  I had opted not to bring all my gear - just too much to schlep around all the time.  Plus my tripod is missing a vital part - somehow I lost it in the house and have no idea where it is.  May be looking at a new tripod if I cannot find a replacement part. 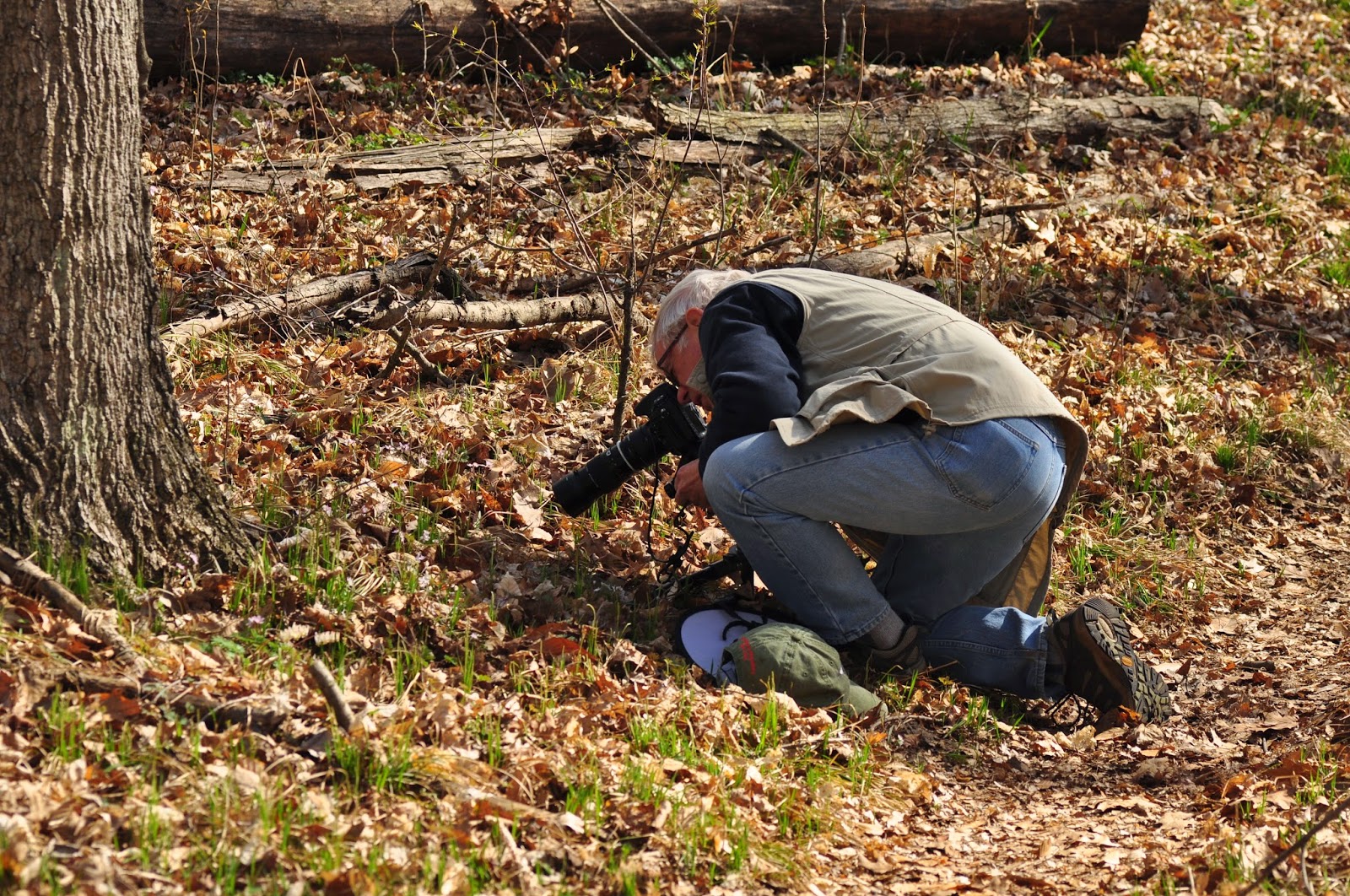 As I was returning to the parking area, retracing my steps down the last portion of the looped trail, the sun had started to do its thing and many of the buds were opening. 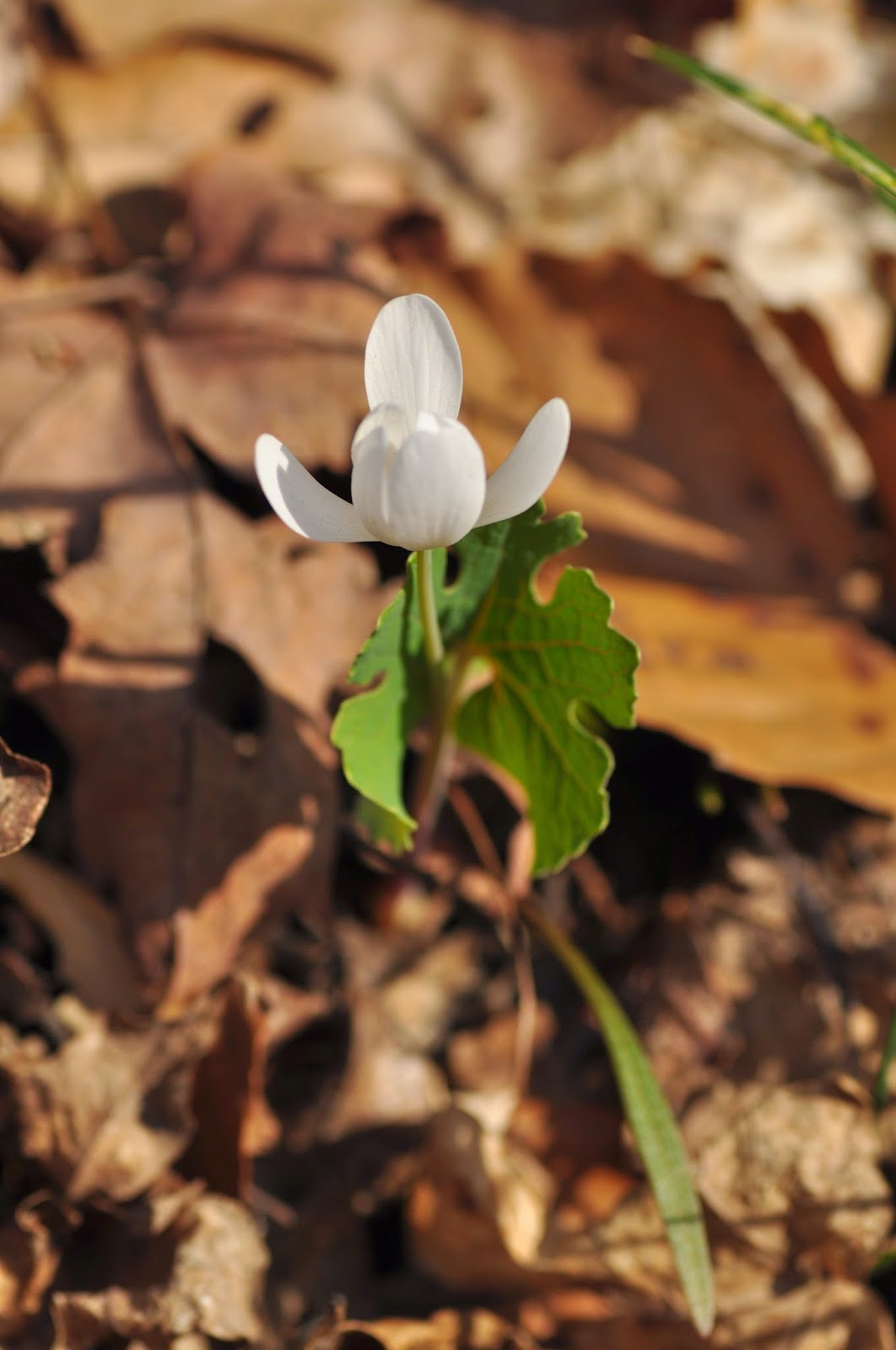 If the rain this weekend doesn't take a toll by pummeling the plants, they should be looking nice Tuesday for our group...if the sun is out.
Posted by Ellen Rathbone at 2:41 PM