We had a group of kindergarten and first graders in today for a birding program, and one member of the group was this very quiet little girl who, because she was so quiet and did her own thing, found lots of great insects and a dead mole (hairy-tailed mole, Parascalops breweri). 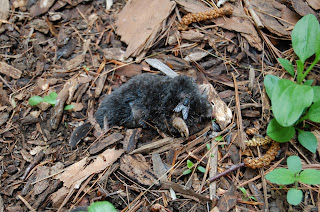 Now, most folks don't get excited about insects or dead things, but I do. We went over to check out the mole, and as I lifted it up, explaining various adaptations that make a mole a mole, two gorgeous black and orange carrion beetles scuttled away from it, hiding themselves in the humus and bark chips. 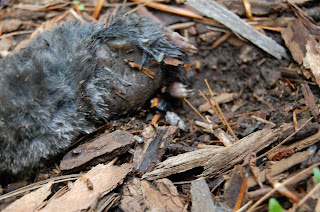 (This is the beetle burying itself under the mole.)

I went out later, armed with the camera, and captured the photos you see here. Sadly, only one beetle remained, and it did NOT want its photo taken! I did my best, but the best is blurry. 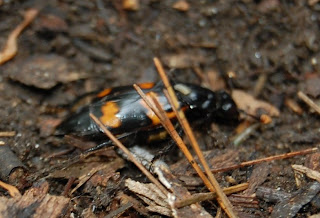 (Notice the orange blobs at the end of the antennae.)

Afterwards I looked it up on-line. At http://www.bugguide.net/ there is a great section of photos of various carrion beetles. Turns out mine is a Burying Beetle, Nicrophorus carolinus. Here is a copy of the photo from the BugGuide website, used here with permission of the photographer, Scott Nelson:

Now is this a great-looking insect or what?

I've developed quite a fondness for carrion beetles. They are large, they come in wonderful shapes and colors, and what's even more fantastic is that they have these absolutely groovy antennae! My beetle had shortish antennae with orange blobs on the end. Some have great feathery combs for antennae.

Reading up on this beetle, I found that usually two, a male and a female, work together when they find a carcass, burying it beneath the ground for use later. When I went out to photograph the insects, the mole was already being buried. The head was writhing about, looking reanimated, and if I hadn't known better, I would've thought the thing was coming back to life. This was the actions of one of the beetles, working diligently to move and bury the mole. I went again a while later and the mole was 60% buried!!! These beetles work fast!

This is a family of insects I encourage everyone to get to know.

Here's my recipe for attracting carrion beetles to study: take one mason jar and fill with water. Collect in the jar insect pests from your garden (Japanese beetles, rose chafer beetles, etc.) and fill the jar (you wanted to kill off these insect pests anyway). Put the lid on and let it sit outside in the sun for a week or so, fermenting. Pour the contents out in a pile and check on it in a day or two or three. This is how I found my first carrion beetles, lovely yellow and black insects the size of the end of my thumb. They had comb-like antennae...very cool.

Posted by Ellen Rathbone at 1:04 PM