About, oh, four years ago, while mowing one of the paths through the “field” portion of my yard, I came across this strange flowering plant. It was a pale pinkish-lavenderish color, with yellow down the throat, and no discernable leaves. In fact, it had no green on it anywhere – the stem was as ghostly in color as the flower. Upon consultation with my trusty “Newcomb’s Wildflower Guide,” I determined it was one-flowered cancerroot (Orobanche uniflora), aka: ghost pipe, and naked broomrape.

I looked for it the following year, but didn’t see it again until yesterday, when I was once again mowing a path around my “field.” I found not one flower, but several separate clusters, and none in the same place as the ones I discovered four years ago. As it turns out, this delicate plant rarely appears in the same place twice. 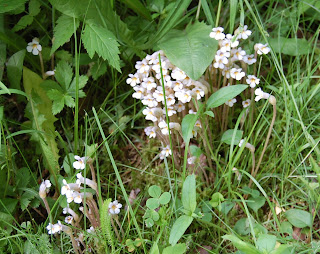 So today I began a search for information on one-flowered cancerroot. As it turns out, there is not a whole lot of information “out there” about this plant; most of what I found was clinical statistics, like height, color, habitat. Still, weeding through it all I think I can piece together a fairly interesting natural history of this ephemeral plant.


O. uniflora is a member of the Broomrape Family. All but one member of this family are parasitic, unable to produce their own food via photosynthesis (hence the lack of green parts). Instead, broomrapes obtain their food (and water) from other herbaceous plants (such as clover, saxifrage and sunflowers) via their roots, which attach to the roots of their oblivious host plants. 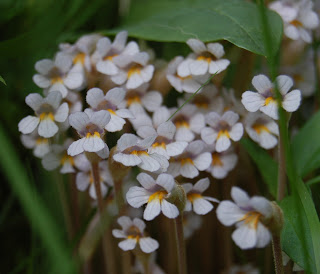 A denizen of damp woodlands and thickets across much of North America, one-flowered cancerroot is described as rare or of special concern in many locations, while in general it is considered to be common. Since the plant only grows 3-10” tall, and is often hidden among its taller neighbors (and rarely grows in the same place twice), I imagine it can be difficult to ascertain a concise record of its presence.

Based on photographs I found on the internet, this flower varies in color from a real purple to essentially white. It has a splash of yellow down its throat (reproductive parts), and the stem is sticky (at least according to descriptions; I felt the ones in my yard and while they do have some fine hairs along their stems, they were not sticky). According http://www.illinoiswildflower.info/, one-flowered cancerroot is pollinated by bumblebees. Based on the flower structure, this does not surprise me. I’ll have to keep my eyes peeled the next sunny day that I’m home and see if a bumblebee visits “my” clusters of flowers. 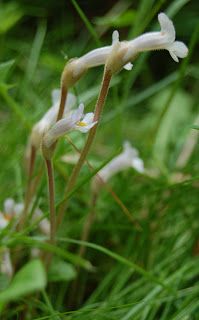 It seems that cancerroot seeds can stay dormant in the soil for quite some time – up to several years – just waiting for the right chemical compounds to become available in the soil courtesy of other living plants. Once the seeds germinate, their roots seek out host roots and latch on, stealing water and nutrients in order to keep themselves alive.

I paged through my Native American Ethnobotany tome to see if anyone had a use for this strange plant, and while other members of the genus Orobanche were used for a variety of medicines, O. uniflora apparently never has been. Two of its relatives, beechdrops (Epiphagus virginiana) and squawroot (Conopholis americana), are known for their astringent properties. As for the name “cancerroot,” it seems it was applied without much forethought, merely taking into account that other members of the family do have medicinal properties.

And there you have it: one-flowered cancerroot. 2008 seems to be a good year for it, at least in my yard. This is a spring-flowering plant (April through June), so the next time you find yourself in damp woodlands or thickets (or unmowed lawns near the forest’s edge) before the summer solstice, keep an eye turned to the ground and scan for these pale purplish plants. Let me know if you see any bumblebees pollinating them.

Posted by Ellen Rathbone at 3:56 PM