Yesterday evening, for a change of pace, Toby and I took our evening stroll over at the Camp Santanoni Preserve, detouring from the traditional route in to the Farm and Camp by taking the connector trail over to the VIC property. It had been raining off and on throughout the day, and temperatures had become quite pleasant...although humidity was high. As a result, the mosquitoes were out in great numbers.


Still, it was a pleasant walk in the early evening and Toby got to sniff new stuff, which is always a joy (to him).


Learned something new, but not too surprising: slugs are repelled by dog urine. As all dog folks know, new routes mean a lot of territorial marking on the part of the pooch, and Toby was going full bore, marking every other tree, shrub, log, tall plant, rock, etc. When he went to sign in on one particular log, I noticed a rather large slug stretched out along the side (looking rather leech-like, actually). As soon as the golden stream splashed upon its slimy back, the slug recoiled, releasing its hold on the log and plopping to the ground in a tight wad. When we walked passed the log again later on (as we were leaving the trail), the slug was still there, still bunched up. I'm pretty sure it was still alive, though. Could it be the salt in the urine that the slug objected to? Or might it be the whole chemical cocktail that makes up urine? Hm.


Two other discoveries yesterday evening: wood sorrel blooming, and white leaves on an American Beech (Fagus grandifolia) seedling (see photo below). One leaf was half green and half white, the other totally white. I brought them in to work to photograph, but the color has faded to tan - like the tan of dead beech leaves in winter. Still, one gets the idea. Is this color variation caused by a virus, as it is in tulips and in other plants with variegated leaves? I can see that someone could possibly make a fortune breeding beech trees with white (or variegated) leaves for the landscaping/horticultural market. 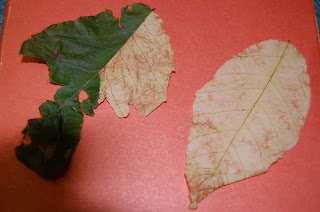 Other blooming observations: lots of one-flowered cancerroot (Orobanche uniflora) is "blooming" in my yard (will try and get photos tonight and blog it tomorrow), and viper's bugloss (Echium vulgare) opened up overnight (I suspect the rain).
Posted by Ellen Rathbone at 9:16 AM