Thoughts for a Snowy Day

The storm came...and the storm went (see new header photo, taken this morning). By 1:00 yesterday afternoon we heard rumors that Raquette Lake already had six inches of snow. This morning schools to the west of us and schools to the north of us are closed. Newcomb got about five inches of snow, some fluffy, some heavy and wet. As I suspected, most of the storm missed us.


Which is fine with me! Who wants to be schlepping heavy wet snow in October?


The bad news is that half of our Hallowe'en Program has been cancelled. Every year we do a special Hallowe'en Program for the K-4th graders in Newcomb and Long Lake, but thanks to the weather, this year it will only be Newcomb. It's a neat program, which is on a five-year cycle. Each year we feature three animals that have bad reputations or are somehow related to Hallowe'en, and we do mini-programs on them. Afterwards the kids all get home-made snacks. This year the segments are on bats, owls and skeletons. The bats, of course, are done by yours truly. I've transformed the exhibit hall into a bat cave, draping the exhibit panels with black felt and hanging some of my bats strategically about. The kids have to don hardhats before entering the cave, and we have to be very very quite so that we don't disturb the bats. I also feature a lot of bat books, of which there are many these days just for kids.

AND SPEAKING OF WHICH! If you are a bat-lover like I, then you will want to check out the two bat books by Brian Lies: Bats at the Beach and Bats in the Library. My eye was caught by the latter as I was walking by the bookstore in Lake Placid last week. Being a collector of all things batty, I had to add it to my collection. The illustrations are priceless, and the rhyming story is delightful! I will be getting Bats at the Beach soon. 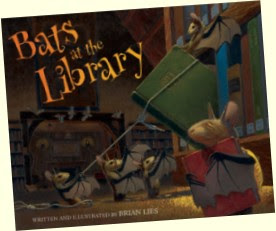 I've finally got my winter feeder up at my office window - birdseed instead of nectar. It certainly doesn't take the chickadees long to find it. Sometimes I think they have scouts posted, ready to spread the word when it finally appears full of food.


I also put out my feeders at home, but I'm sans seed at the present time. Which is fine, because I suspect the bears are still out and about and wouldn't be adverse to helping themselves to some fat-rich seeds. Still, many of the sunflowers I grew this summer remain upright and sporting their seedheads, so the birds are welcome to those!

Toby had a great time out in the snow yesterday evening - we had about an inch or so by 5:00. He ran around and around in darting circles, scooping up mouthfuls of snow and eager to play. I think we all love the first snowfall of the year - it adds something exciting to the dull greyness of late fall.
Posted by Ellen Rathbone at 9:46 AM