It seems that yesterday several turkeys came to the VIC and had a party in the parking lot! Not only that, but they wandered down the walkway to the main building and checked out the snow-covered gardens.

Mr. Mike says the tracks weren't here yesterday at 9am, but when he returned at noon, they were. It must've been a late-morning party.

I love turkey tracks. They are so easy to identify (what else around here has avian feet that big?) and since I grew up with turkeys a rarity, it never ceases to amaze me when I see tracks...and it's even more exciting when the birds are present (even if these days they are almost as common as fleas on a dog).

When I worked at the Utica Zoo, we had a flock of wild turkeys that often wandered the grounds early in the morning when we first opened. If you don't believe that birds are the living descendants of dinosaurs, you obviously haven't watched a flock of turkeys in the early morning light! Maybe it's due to images from "Jurassic Park," but turkeys running across the ground look so much like dinosaurs that one almost feels like time has turned back. And for someone who loved dinosaurs as a kid (me), this is a real treat.

We are down to about 17" of snow now, thanks to the rain Christmas Eve (it was like a bloomin' typhoon out there). But it's not too crusty, surprisingly. Animals were on the move last night (making up for lost time), so there should be some good tracking out in the woods today. I encourage you all to take advantage of the nice weather today and go outside to see who was out and about in the last 24 hours.

Update:
The turkeys were back this afternoon snarfing up seeds cast to the ground by eager birds at our feeders. I shot this photo from the office window, but when I snuck out on the back deck for a better shot, they took off. 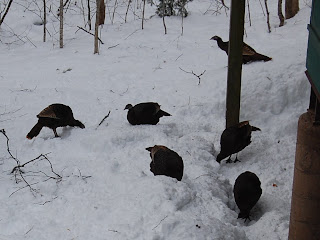 Turkeys have a very strong "flight" sense when it comes to any perceived threat - they aren't about to hang around to find out if the danger is real or not. First one, then five, then the whole group started to shuffle off into the woods, and then with a whoosh! they took to the air. Flying turkeys are pretty impressive. Unfortunately, the trees were in the way of getting any shots worthwhile.
Posted by Ellen Rathbone at 9:42 AM