On my way to work this morning I stopped by The Spring to fill up my water jugs, and there on the ice of the pond were several sets of otter tracks: 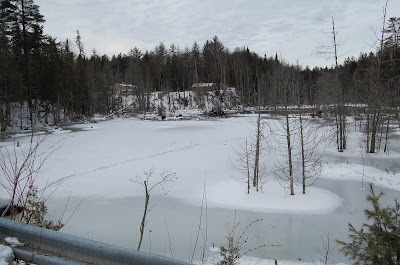 I drove to the office, grabbed the camera, and came back to the pond to get photos and see if I could figure out what was going on. All told, there were four sets of tracks. 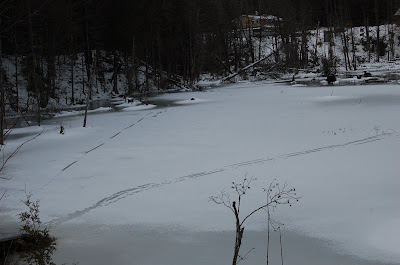 One was off by itself, moving towards the road where I was standing. 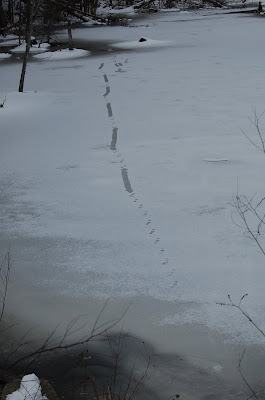 The other three were a jumble. It could be one otter travelling back and forth, or it could be multiple otters. The tracks were not defined well enough for me to tell from the road which way they went, and the ice was way too thin for me to venture out to get a closer look. 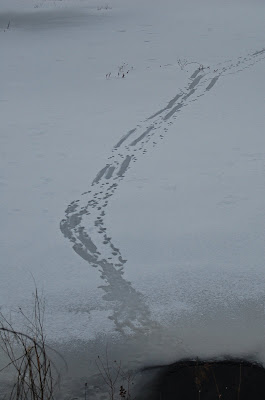 Looking up the trail they/it made, there were areas where the snow was all wiped away; it's possible the animal(s) rolled. This suggests to me that either multiple animals were frisking about, or perhaps they/it rolled to remove water from fur. 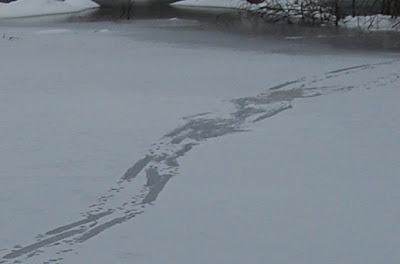 I'd give my eye teeth to have a wetland like this in my back yard. What a great place for a Sit Spot!!! (Or, as we called them many years ago at the nature center where my career as a naturalist began: Seton Spots, after the famous naturalist Ernest Thompson Seton.)

Other notes from this morning: Toby and I encountered a flock of maybe a dozen snow buntings pecking up salt and sand at the village's salt shed. At work we had a brown-headed cowbird at the feeders! And yesterday afternoon we had a male cardinal at the feeders! The current regulars are pine siskins, goldfinches, blue jays, black-capped chickadees, and red-breasted nuthatches.
Posted by Ellen Rathbone at 10:57 AM