After yesterday's wildflower extravaganza, I headed out on our trails to see if there was any chance something might be open, and right off the deck, there it was: a Purple Trillium (Trillium erectum), aka: Wake-robin (of Thoreau fame), Birthroot, Red Trillium, Stinking Benjamin. 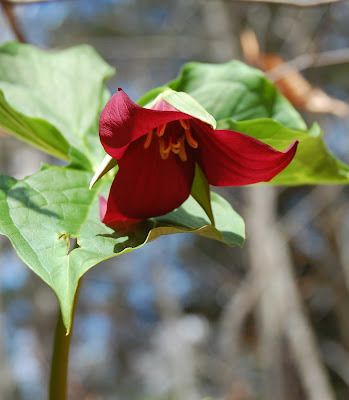 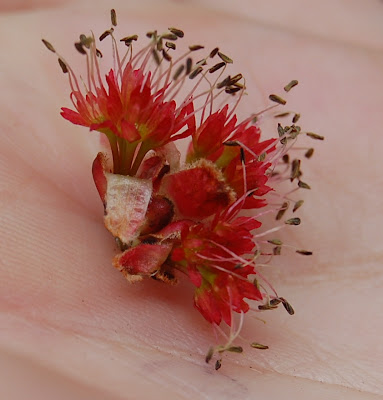 Don't they remind you of fireworks?

And, as I gazed across one of the coves, a whirlwind of yellow dust swirled above the marsh. A veritable pollen tornado. Of course I had to go see what had been the source. This is what I found:

This marshy area is full of buttonbush, so immediately I thought that was it, but buttonbush flowers don't look at all like this, and it's not a male buttonbush flower opening first, because the buttonbush flower we all know and love isn't around until mid-summer, and if those are the female form, then the pollen being released now wouldn't do them any good. [inhale] So, I need to figure this one out. It's a woody-stemmed shrubby thing, alternate branching, thick as thieves in the wetland. And, of course, no leaves yet. Sweet Gale? Could be - has catkins over winter which open into golden-brown staminate (male) flowers. I know there's sweet gale (Myrica gale) in this wetland. Yes, I'm going with sweet gale. Unless there are other suggestions...

The wind is blowing like mad out there - felt quite good (despite the falling debris, branches and even trees). And the dragonflies were getting quite a ride from the gusts. Yes, dragonflies - Common Green Darners (bright blue abdomen, green thorax and head) - Anax junius. This is about a month early for our first dragonfly sightings of the year, but there they were, zooming all over the marsh, even a couple in the mating clasp. I tried to get photos, I really did, but they were too fast and too far away for any of my shots to turn out.

Posted by Ellen Rathbone at 1:35 PM