A Little Ray of Sunshine 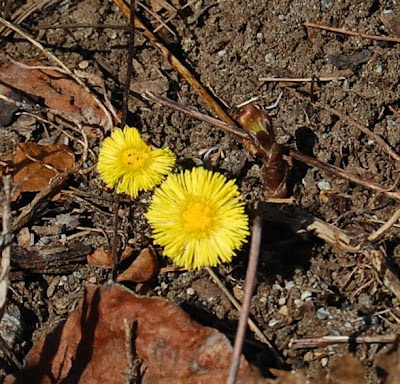 Ya gotta luv coltsfoot! One of the first flowers of spring, it's stem coated with a furry down, coltsfoot (Tussilago farfara) looks like a stylized Sun.
Historically, coltsfoot was so important medicinally that its leaf was used in France as a symbol for apothecary shops (in the days when most of the greater unwashed public was illiterate). It was used as a cure for lung ailments, it's smoke inhaled as the cure for asthma (seems counterindicative, doesn't it?). The leaves were also soaked in saltpeter to create very brightly "candles." It was a major ingredient in "British Pipe Tobacco," a trait perhaps learned from the gypsies who were known to use the dried leaves in this fashion. The Scottish highlanders reputedly stuffed their mattresses with the downy seedheads (although you'd need an awful lot of seedheads to get enough fluff to make a mattress of any worth).
A non-native plant, coltsfoot was brought to this country by our ancestors and it has done well, proliferating in waste areas (roadsides) and gardens with poor soil.
And why the name coltsfoot? The answer becomes more obvious later in the season when the leaves appear: they are shaped like a horse's hoof. Perhaps we should try calling it by its alternative name: son before father, a reference to the fact that the flower blooms before the leaves appear.
Coltsfoot is monotypic, meaning there is no other plant in its genus.
Posted by Ellen Rathbone at 3:02 PM