It's a Froggy Sort of Day

I went out early this morning (in theory to dodge the blackflies and mosquitoes - ha ha) to see what was blooming. I got some nice shots of pink lady's slipper (Cypripedium acaule) 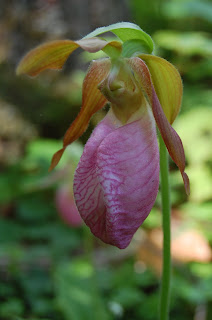 and it's unintentional (?) victim: 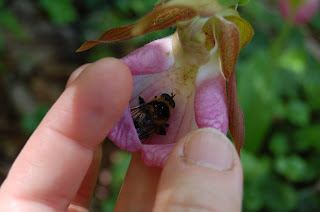 Every flower has an interesting back story, and here's the back story of the lady's slipper. This plant produces no food for it's seeds (it's not a very good parent). Without a food source, the seeds would surely perish. In a world where species survival is considered the whole purpose for existence, this is a poor strategy, so the lady's slipper has found a loop hole: it has developed a relationship with a fungus. This fungus breaks open the seed(s) and attaches to it/them. It is the fungus that brings food and nutrients to the seed and allows it to flourish and grow.

Now, what about the bee? No, the lady's slipper is not a carnivorous plant. What has happened here is that the flower attracted the bee for its nefarious purposes (pollination). The bee is supposed to scramble in, get covered with pollen as it searches for non-existent nectar, and then brush against the stamen and deposit the pollen as it exits. Often times the bee, having little brain, just doesn't find the exit and it perishes, like the one in the photo. Many bees, however, do make it out, and, if they are stupid enough, they may enter another lady's slipper in search of nectar- only to be fooled once more. Eventually the bee may learn to avoid lady's slippers. If not, well, you can see what can happen.

From the lady's slippers I moseyed over to the old beaver pond, where the dam blew out big time this winter. 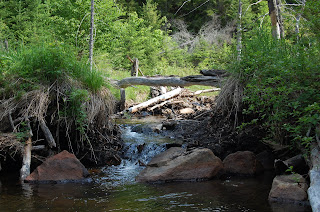 That's the big gaping hole in the middle of the dam.

I parked myself on the shore and set about frog watching. All told, I had at least nine froggy friends hanging out with me, most very obliging for a photo shoot. So here is a selection of froggy fotos for your enjoyment. 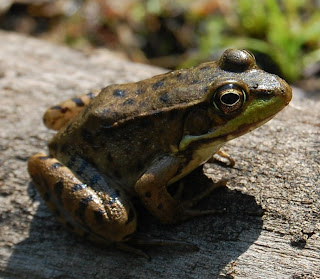 Portrait of a Green Frog. 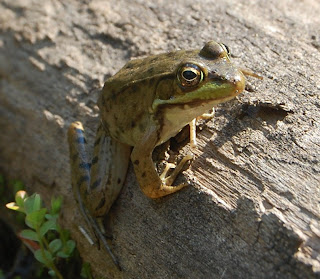 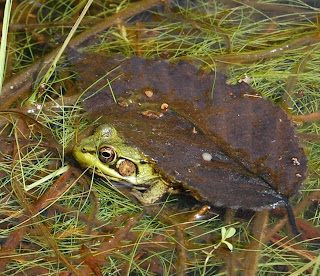 Lurking under a leaf. 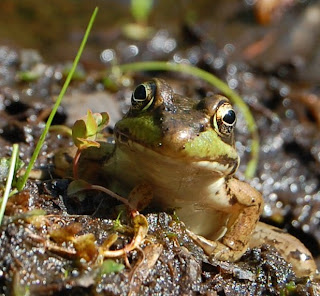 My very favorite froggy foto: a face anyone could love!

On my way out (having fed more than my share of insects), I encountered this lovely pale Jack-in-the-pulpit: 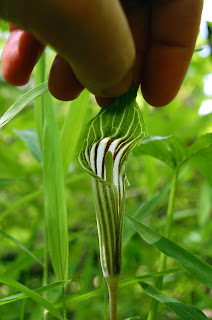 Posted by Ellen Rathbone at 2:17 PM