Quadrillium - and an Abundance of White

Yesterday I joined a group of nature enthusiasts for a drive to Goll Woods, a patch of "virgin forest" in northern Ohio. 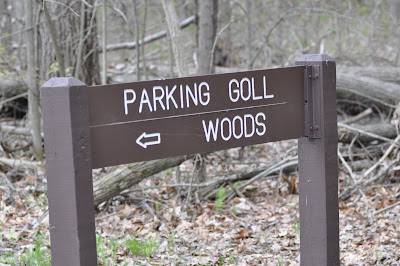 Goll Woods is a rare treasure - a large plot of land that was purchased in the days when the midwest was being settled, and yet the owner, Mr. Goll, chose not to develop this parcel.  It remains one of the few original patches of Ohio forest left in existence. 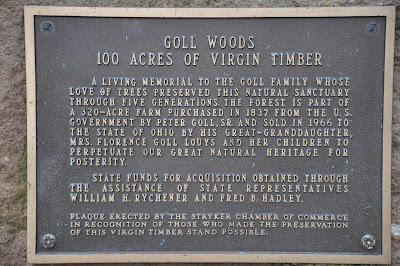 Goll Woods is lowland forest, along the Tiffen River, which this day was still flooding some of the trails.  As such, many of the plants here like to have their feet wet. One of the trees that's quite famous here is the burr oak, which grows to significant proportions (you'll see one shortly).  Apparently one blew over recently and the rings, when counted, aged the tree to over 500 years! 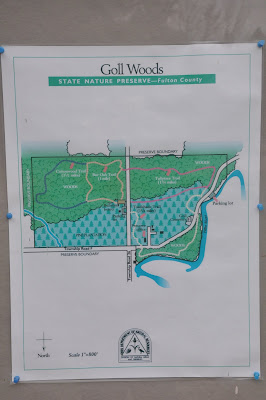 Goll Woods is noted on the internet and in wildflower circles as THE place to go for wildflowers.  It was, unfortunately, a rather cool and overcast day, so many of the flowers were closed, but this stretch of the Toadshade Trail was just carpeted with white trillium! 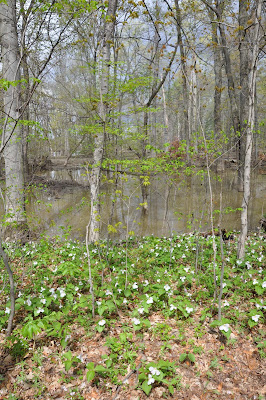 And nestled among the hundreds of tri-petaled flowers, 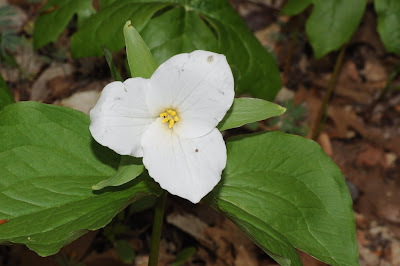 I found this four-petaled one!  Would that make it a Quadrillium? 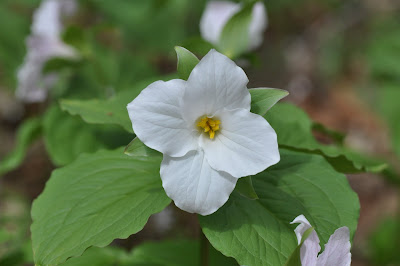 Here is a tally of some of the other flowers we found this day: 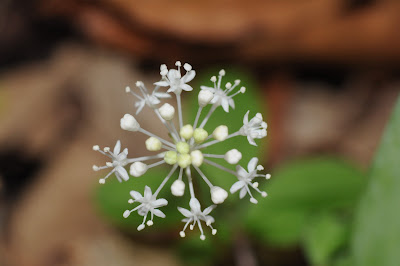 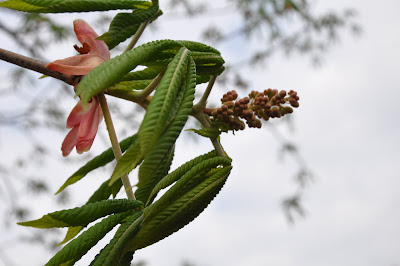 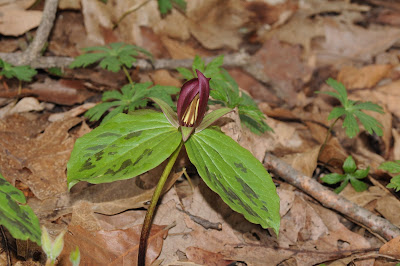 Toadshade (a new flower for me) - one of the trilliums 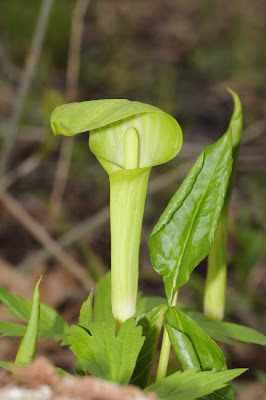 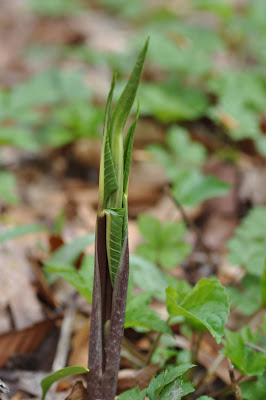 (and lots of Jacks just starting to unfold) 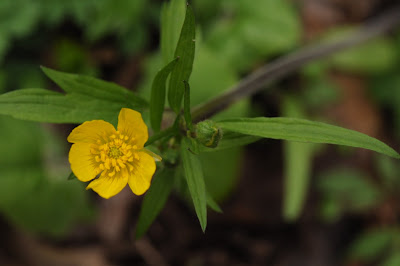 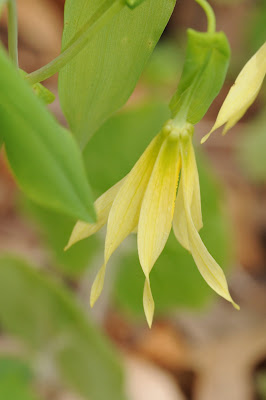 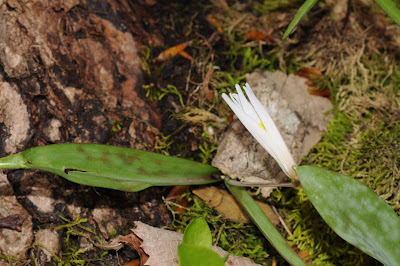 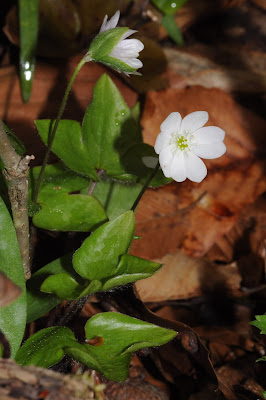 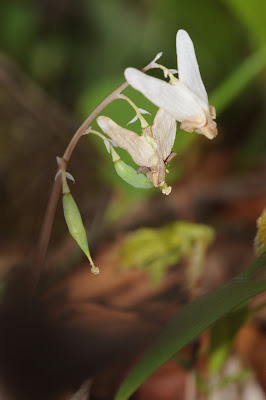 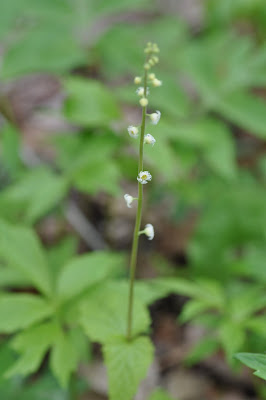 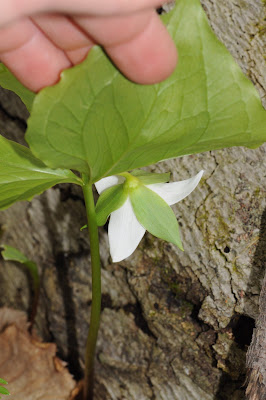 Nodding Trillium
Update:  we have some debate among members of the group as to which trillium this actually is.
Some say nodding (T. cernuum), while others say drooping (T. flexipes).  The way to tell these two very similar species apart is to look at a) the petals - on nodding trillium they are strongly recurved (they bend backwards), whereas on drooping, they remain pretty straight, and b) the anthers- on nodding they are brown and on the drooping they are cream-colored.  Of course, my photo is of the wrong angle of this particular plant to really determine either. 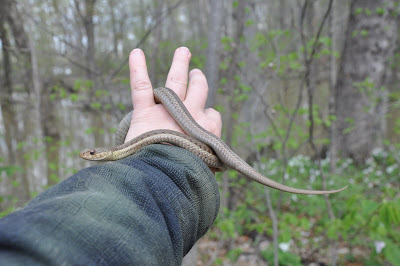 This lovely garter snake was nestled in the leaves and I almost stepped on it.  What was very odd about this reptile was that it was VERY warm!  The sun wasn't shining, so this perplexed us mightily  Could it have been warming up from the decaying leaves?  I find this not too likely - decay wasn't happening that fast.  Might it have been a female, and she was warm because she was gravid?  The body was quite stout.  Garter snakes are one of the species that give birth to live young (the eggs hatch internally), so this might explain the stoutness, and maybe even the warmth.  Hm...looks like I need to do a little more research. 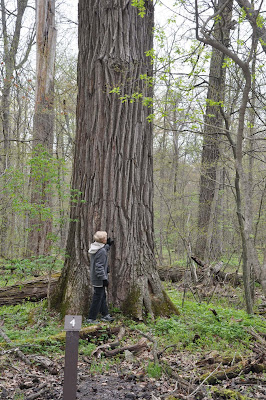 Here is Jean next to one of the HUGE old burr oaks.
Admittedly, Jean is vertically challenged, but even so, this is one big tree. 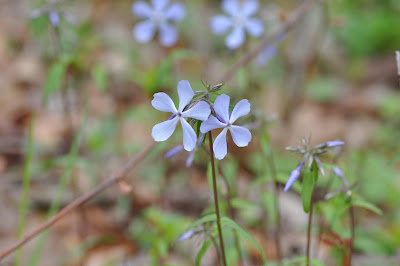 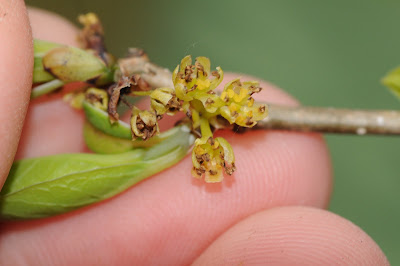 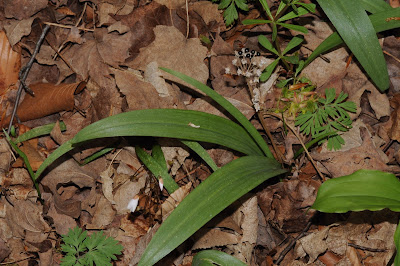 White Clintonia - we think.  If so, another new plant for me. 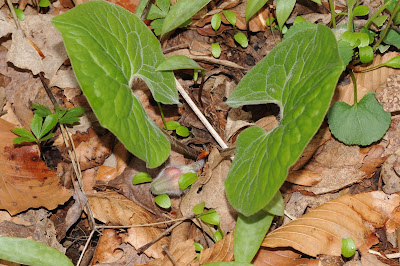 Wild ginger with an itty bitty bud just to the left. 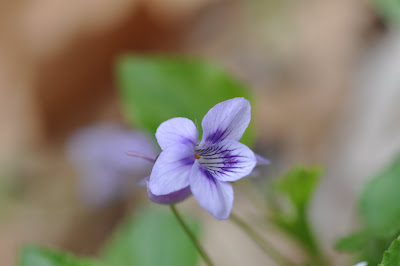 We came across this mystery violet.  Very long spur (see below), no hair inside the throat. 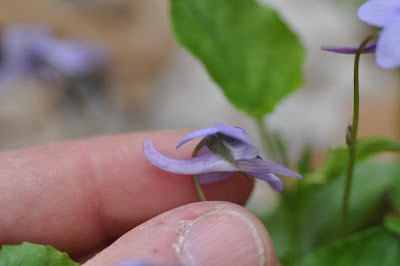 Jackie - any ideas?  You are my violet go-to person!
Update:  Long-spurred Violet (Viola rostrata) - thanks, Jackie! 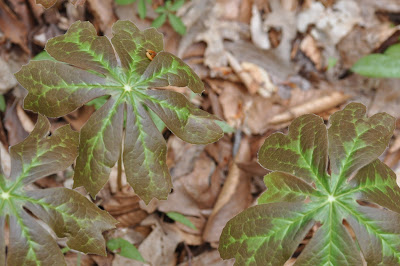 Mayapples were everywhere, but not blooming yet.
This patch had some lovely mottled leaves. 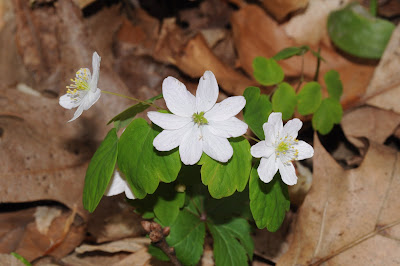 A few wood anemone were hiding among the spring beauties. 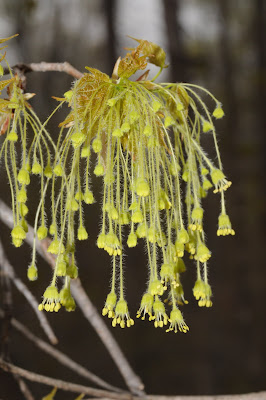 And Sugar Maples!  Not a tree I'd expect to see in a wetland, since they tend to prefer drier, rockier soils.
I guess one just never knows what one will find when it comes to Mother Nature.
Posted by Ellen Rathbone at 10:19 AM