Weak Stomach? Pass This By

Last weekend, I was driving home and passed an opossum napping permanently along the side of the road.  Raccoons and 'possums are quite prominent roadside decor around here, so I wasn't too surprised to see it.

Two or three days later, I drove by and it was alive with flies.  A cloud of large black flies swarmed around its decaying corpse.  I decided that the dog and I would walk different routes for the next few days.

Last night, we walked along this stretch of road.  I had my eyes open for the body, for I didn't want Toby to get interested in it.  But when I looked, I didn't see it.  No lump or bump along the side of the road was visible.  Could it be that something carried it off?

As I approached the area where I knew the body had lain, a low rise was visible at the roadside - the flattened remains of the body.  I thought "someone must've driven back and forth over it," but when I got closer, the truth was revealed.  (This is where those with weak stomachs should turn away.) 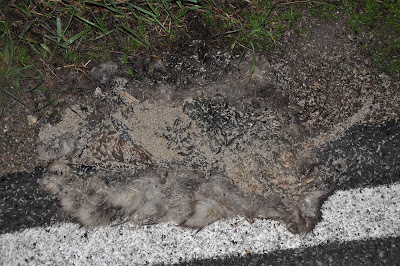 That cloud of flies had laid their eggs EN MASSE!  All those eggs hatched and the voracious larvae had consumed most of the 'possum's flesh.  This was why there was so very little left:  they had eaten it all!  Not only that, but rising from the writhing mass were heat waves.  You know, that wavy the air looks on hot days right above the pavement of the road, or the hood of your car.  The mass of maggots were generating enough heat to create heat waves! 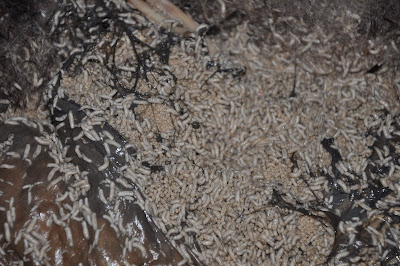 I'm a curious sort, though, so I had to get closer.  The movement of those maggots enthralled me so much that when the dog and I got home, I grabbed the camera and we hopped in the car.  We drove back to the scene of the "crime" so I could photograph it.

Only a video, however, could capture the movement.  So, here's the video I shot.  Note how the larvae seem to flow or slide down the flesh, across the bottom, then back up the side and across the top only to slide back down again.  It was like watching a current of water. It's almost beautiful.


I have in my collection of books a great little volume titled "Corpse," which talks about the history of forensics in determining time of death.  Insects are the key to nailing down the time of death, but even knowing species and how quickly they detect the gasses a body gives off the moment it expires (yes, it can be that fast), the exact time of death can still only be estimated.  It's a fascinating subject, but, admittedly, not for everyone.

Well, it is headed for 7:30 PM and I need to get home to feed the animals and find some dinner for myself.  Another long day at the office, but I had to share my maggot story before I called it a night.
Posted by Ellen Rathbone at 7:22 PM