The Larvae in My Life

Yesterday I posted on my garden blog a photo taken a couple days ago of a tomato hornworm in my garden.  It was covered with the white pupal cases of a braconid wasp that had parasitized it.  Last night I went back into the garden to see if I could find it again, and I did.  It wasn't looking too happy.  Upon closer inspection, I noted that the pupal cases had all "hatched" - the wasps had matured, emerged and flown away. 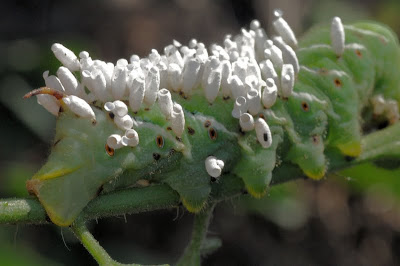 According to the literature, the caterpillar should be dead by now, since the wasp larvae had mostly turned its innards into soup before pupating.  Yet this fellow was still hanging in there.  It raised it's head when I plucked its leaf from the tomato plant.  By the end of the photo shoot, however, it was decidedly more limp. Bummer for the hornworm, but GREAT for the garden - more little pasarsitoidal wasps have entered the world to wreak havoc on the hornworm population!

Not all caterpillars are detrimental, at least from a human standpoint.  Case in point - here we have a curled up leaf on a native spicebush plant.  What could be inside? 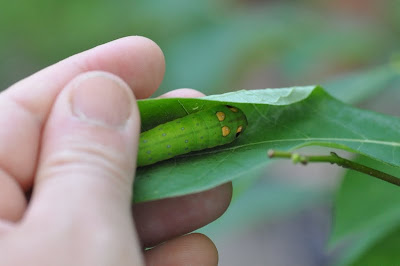 This green and yellow lovely is a spicebush swallowtail caterpillar.  Like all caterpillars, it eats the leaves of its host plant, in this case the spicebush.  However, it doesn't seem to destroy the whole plant like, oh, say, the tomato hornworms do.  These are lovely black and blue butterflies when they become adults. 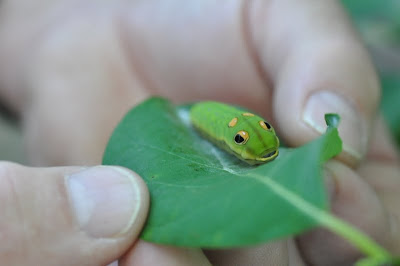 This beautiful little caterpillar was perishing on the sidewalk out in front of the office when I found it a couple weeks ago.  I knew it didn't wasn't long for this world, so I brought it in to photograph and ID.  We thought it looked similar to the cecropia moth caterpillar, so that 's where I started.  Sure enough - it was on the page opposite the cecropia in my caterpillar ID book:  a tulip tree moth larva.  The tulip tree moth is a silk moth, like the cecropia, and as an adult it sports large brown wings with tan and white markings.  According to this book, when the adults emerge, the main courtship flight takes place about 15 minutes before dusk high in the air near the tops of the tulip trees.  It is something to look for! 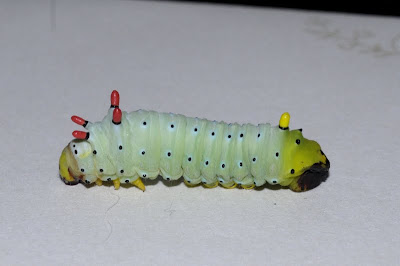