It was after 9:00 last night when Toby and I headed out for our walk.  I was hoping the heat and humidity would be down, but it was only marginally so.  The sun was only starting to set, so there was plenty of light, but even so, I brought a flashlight along just in case.

We don't go very far these days, partly because of the weather, and partly because poor Toby is having some difficulty getting around.  His get-along has quite a few hitches in it, and he stumbles more often than I like.  So, we were only heading up about a quarter mile or so from the house.  Just as we were getting ready to turn around, he caught a scent and began pursuing it across the grass.  I noticed a small black lump in the grass, which I thought maybe was a bit of broken branch, or perhaps a chunk of asphalt.  It turned out to be a small turtle: 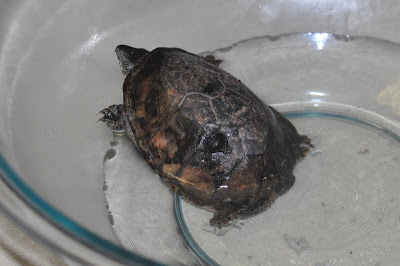 As you can see, I brought it home.  Partly for ID purposes, partly because I felt so sorry for the thing.  Here's what it's shell looks like: 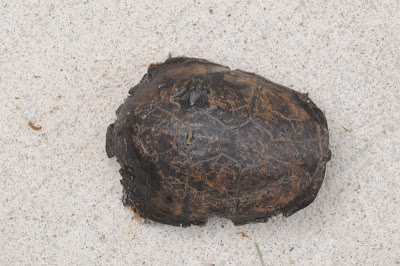 This poor fellow has seen some rough days!  Encounters with lawnmowers?  Combines?  Who knows - but he's certainly had luck healing, even from this hole: 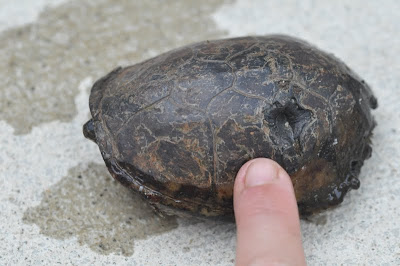 This is one of the musk turtles (Sternotherus sp), which share a family (Kinosternidae) with mud turtles (Kinosteron sp.).  This particular musk turtle is the stinkpot (S. odoratum), also known as a common musk turtle, skillpot, and stinking Jim.  Hm...must be they are smelly.  My little specimen here isn't particularly odiferous, but according to the literature, they have "four musk-producing glands whose tiny pinpoint orifices may be seen on the underside of the marginal scutes of the carapace.  Freshly captured individuals often produce a drop of the yellowish musk from each of the glands." (Amphibians and Reptiles of New York State, by Gibbs, Breisch, Ducy, Johnson, Behler and Bothner.) Apparently the stink is not enough to drive away predators - my specimen might be evidence of that. 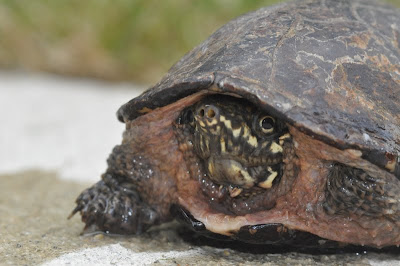 Another book claims that these turtles are feisty little biters, capable of reaching their back legs with their powerful jaws.  Hm!  Awfully glad I didn't know that when I picked him up and carried him home.  He pretty much drew himself into his shell (there is a hinge on the front end of the lower shell, or plastron) and stayed there.  He pulled his front legs and head inside, and tucked up his back legs and tail - almost completely hidden.

The way to tell the males from females is based primarily on the size of the plastron.  A male stinkpot has a very small plastron, which allows him greater mobility - his legs can move around a whole lot more without that shell getting in the way.  Also, males have thicker tails that are tipped with a blunt nail.  Females have thinner tails, and may or may not have the nail.  My guy here hasn't given me a good look at his tail yet, so I can't confirm the nail. 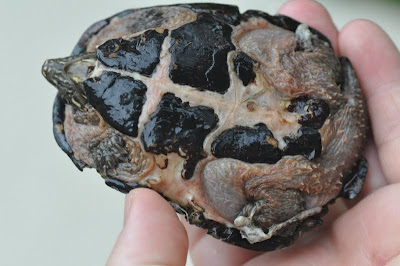 My Audubon field guide to reptiles and amphibians claims that if you are walking along in the woods and a "rock" falls on your head, it is probably a stinkpot, for these turtles are quite able climbers.  How 'bout that, eh?!  Maybe that's why this one is so beat up! 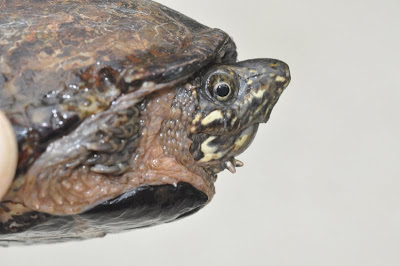 I like the two little barbels under his chin.  What purpose do those serve, I wonder.

This is a water turtle, not a land tortoise, which is why I was so surprised to find it in someone's yard last night.  I'm in an agricultural area, with lots of fields.  I'm also near some state wildlife lands, and there are shallow ponds around, but not all that close to where we stood there on the roadside.  The nearest body of water was probably at least a half mile away.  Seems an awfully long way for this guy to have come.

Normally, musk turtles are found in wetlands with shallow, muddy waters that have little to no current.  My book claims they don't wander far.  Once again, I wonder why he was where I found him.

One of the things I love about these little turtles is the nose.  It's a little piggy nose, and makes a pretty nice snorkel when one is walking along the bottom of a shallow pond or stream.

For now this little guy is taking a well-earned rest in a terrarium at work.  I was going to make it an aquarium, since he is aquatic, but there's a tag on the tank that says "do not fill with water."  So, I filled an artificial pond for him and gave him a couple worms.  Next week, when I get back to work, I will take him out on the property and turn him loose in our glacial pond - it is a good shallow wetland that is well off the beaten path and far enough from roads that he should have a good remainder to his life.

Turtle Update:  When I came in to work this morning, the turtle was out and about in the tank.  I was thrilled!  I didn't see the worms, so I'm hoping he ate those.  The Tuesday Morning group was going out for their weekly walk and I decided to join them, with the goal of releasing the turtle at the glacial pond.  He was very active when I took him out of the tank - stuck out his long neck and pushed at my fingers and hand with his feet.  He was rarin' to go!  I placed him in a container and off we went.  I didn't quite get down to the water's edge; it's quite marshy around the perimeter of the pond, and since the grasses were so tall I couldn't quite see where I was going, I went as far as I felt comfortable going (while simultaneously fending off hundreds of mosquitoes), and set him down with his face towards the water.  The rest is up to him.
Posted by Ellen Rathbone at 4:39 PM

Email ThisBlogThis!Share to TwitterShare to FacebookShare to Pinterest
Labels: turtles