Not Just Another Pretty Face 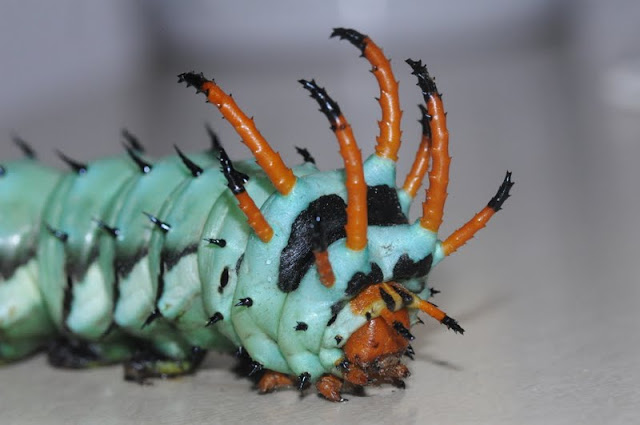 This Hickory Horn Devil, or, more beautifully named Regal/Royal Walnut Moth, was brought in to us at work today at the close of our Birds, Blooms and Butterflies Festival.  All squashed up, it measures about four inches in length.  When it is stretched out and on the move, it is much longer.

This is the first one of these I've ever seen.  (In fact, today had another first for me: not one, but TWO giant swallowtails, but I'll post that another day.)  This caterpillar is so impressive that  wherever we carried it, it drew a crowd.

Once a common species across bottomlands, woodlands and forests, from Florida to Massachusettes and westward to Texas, it is now disappearing across much of its range.  No wonder I've never seen one!

This behemoth spends a good portion of its life in suspended animation.    There is only one generation per year.  When the caterpillar gets ready to pupate (between August and November), it burrows into the ground, where it spends the winter in a subterranean cell - they don't spin any sort of cocoon.  Now that's different.

As the name suggests, these 'pillars eat the leaves of hickory trees, but they will also consume ash, butternut, cherry, cotton, lilac, pecan, persimmon, sumac, sweet gum, sycamore and walnut.  This list, apparently, it not conclusive - other species may also make up the diet.  This particular horn devil was found on the ground beneath a walnut tree, so that is probably what it was eating.  Right now we have it in a large jar.  We are hoping it is getting ready to pupate, based on its size and the fact that the folks who found it said its head was partially buried int eh soil.  So, I've filled up its jar more than halfway with soil, just in case it feels like going underground.

If/when it does bury itself, we will dig a hole and bury the jar outside for the winter.  This way the animal will have the greatest chance for survival.  Come spring, we will dig it up and, with fingers crossed, wait for it to emerge as an adult.

As terrifying as this caterpillar looks, it is considered to be quite harmless.  I noted that when touched, it swings its head sideways, and its tail end, making itself into a sideways c-shape.  Perhaps this is to scare off potential predators into thinking they are about to be gored.  However, when asked if she would hold it for a photo for me, so I could have a size reference, one of my coworkers said absolutely note.  She said that these caterpillars have a "strong grip," and looking at those claspers, I don't doubt her at all.

Below is (hopefully) a video of this wee beastie as it took off across the desk during the photoshoot.