Fair weather is hard to come by here in the winter, but Monday dawned another sunny morning, so I decided laundry could wait (it's still waiting) - we were going for an explore.
I grabbed T's harness and my camera, and we hopped in the car for a short drive over to the LefGlen sanctuary. 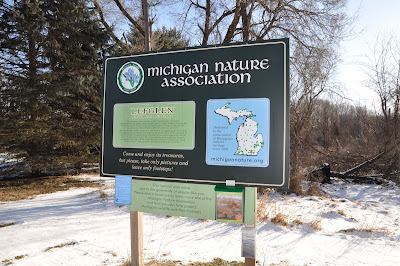 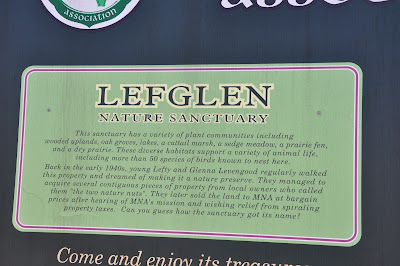 This is one of those sites about which I have heard so much (like Nan Weston), so I was eager to see what the fuss was all about.  Granted, most of the fuss is apparently caused by the spring wildflowers, which, even though it's been a very mild winter, are not blooming yet - it is, after all, only mid-February. 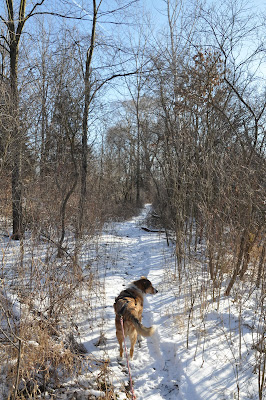 While I had great expectations for seeing some amazing things, what I did NOT expect to see was a beaver!  This isn't beaver country.  Muskrats, yes, but beavers, no.  So imagine my surprise to find this tiny beaver in the path.  Knowing it was out of place, I gently tucked him into my pocket to relocate him to a more appropriate location. 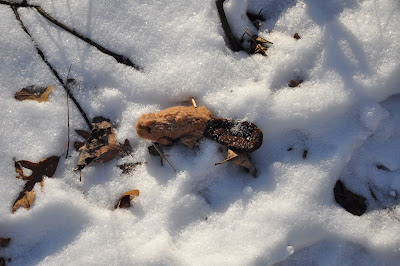 LefGlen is a little pocket of woodland that is surrounded by farms.  Big farms.  Well, big in my opinion, but I suppose on the scale of mid-western agriculture they are pretty small. 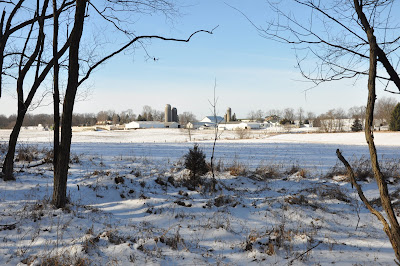 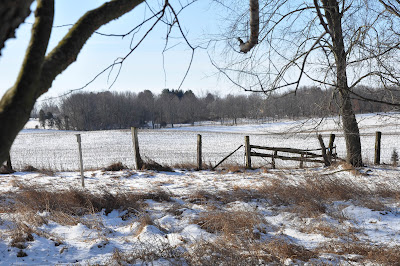 And the people of Michigan, or at least this part of Michigan, take their deer hunting seriously. Back in the 'dacks, people actually "hunted" for deer - skulking around the woods, following trails.  In Central NY it was common to see tree stands - a few slats nailed to the side of a tree and a very rudimentary (and small) platform maybe 10-15 feet up.  Here, however, the deer blinds are on par with some tree houses and ice fishing shanties I've seen! 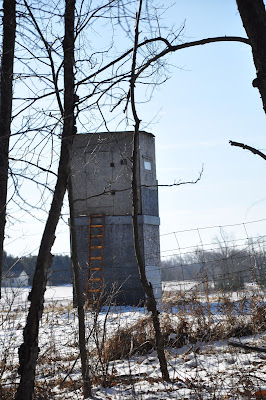 A small shed/shack was tucked away in the woods.  A shelter built by Lefty or Glenna as a retreat in the woods? 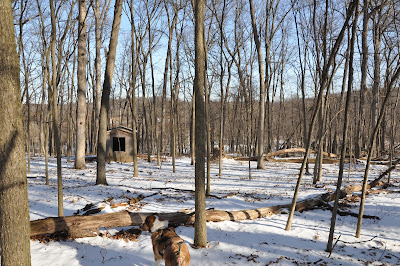 The snow was simply littered with tracks!  Plenty of fox and squirrel, mouse and rabbit, and of course deer.  I was surprised a bit to discover how many of the tracks were made by cats, though.  As in house cats. 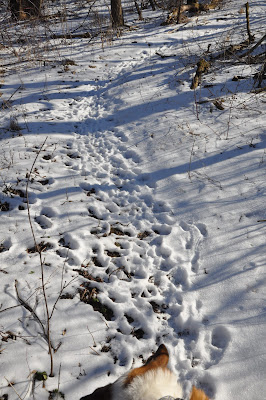 Along the edge we found a frozen pond - probably an ephemeral pond that stays at least damp most of the year.  The ice was covered with tracks, all converging on the drain pipe.  HM... 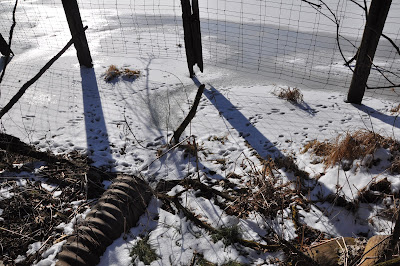 As I suspected, on mild days this was a source of open water.  All the tracks lead right here - no doubt the owners of the feet looking for a place to get a drink of water.  Although it was sunny, the day was young enough that the sun's warmth hadn't yet worked its magic here - the water was still frozen. 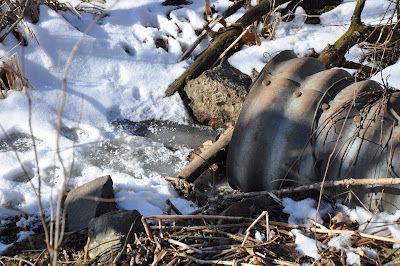 We were following the Blue Diamond Trail, which was well-packed by critters and at least one person.  But then the person took a detour off the trail and into the woods.  Soon Toby and I were on our own.  In a couple spots we (that is, I) had to search a bit to find the next trail marker.  We were now high on a ridge.  The presence of a bluebird nest box in the woods gave me pause.  Bluebirds prefer open areas.  And judging by the evidence at the opening, it's not birds who are making use of this shelter. 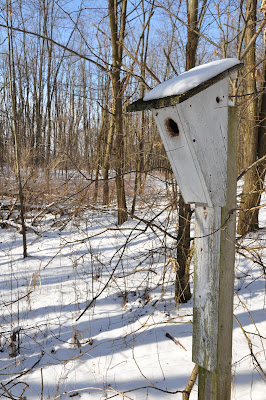 I was just tickled pink to see American beeches.  And not just beeches, but HEALTHY beeches.  No evidence of the beech scale necrosis that is wiping out the beeches back east.  It is, of course, only a matter of time before the disease gets here, though.  And Michigan has lost all its ashes to the emerald ash borer. 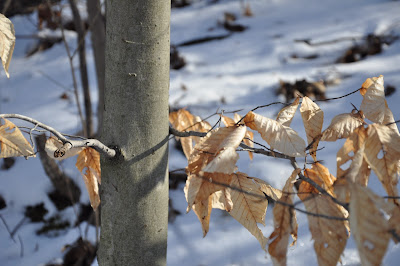 After we came down the switchbacks off the ridge, we reached a T-intersection.  Which way to go?  We went right, and soon came across this sign. 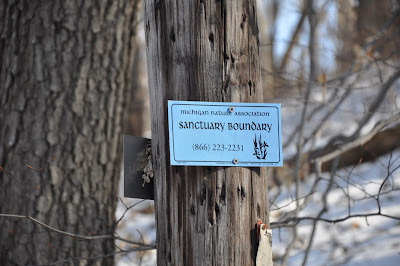 The well-worn trail continued, though, so we followed it another hundred feet or so, and saw irrefutable evidence of our trespass:  another deer stand (this one more like the ones back home).  So we turned around and went back the other way. 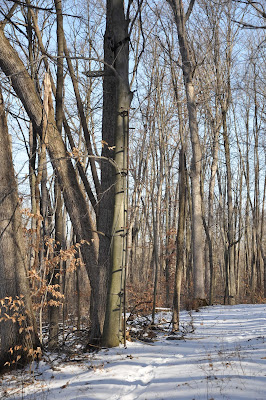 I love how winter makes evident to our otherwise unseeing eyes all the nests built the previous year.  What is so obvious now is amazingly invisible when the leaves cover the trees and shrubs. 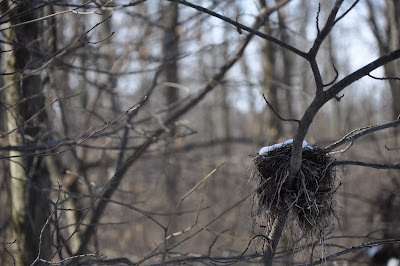 Toby was in seventh heaven on this walk, his nose glued to the ground gathering the scents of dozens of animals.  This log was apparently a major "sign post."  We were here checking it out for a while. 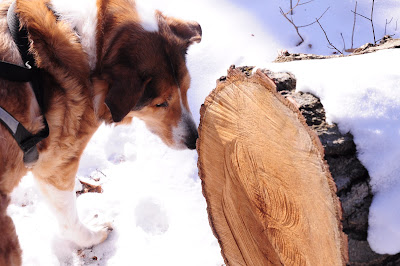 I, on the other hand, need more visible signs of animal activity to appreciate all that is going on in the woods.  For example, something had a good dig going on here.  Deer?  Rover?  The tracks were too jumbled to tell. 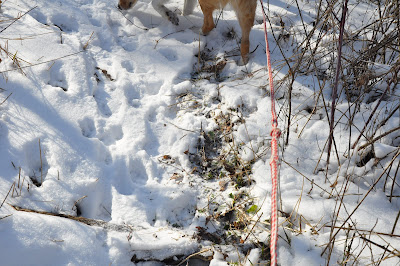 The removal of bark on this twig is a little easier to explain - no doubt a small mammal (rodent) removed the bark for the nutrition it would find in the thin inner bark layer. 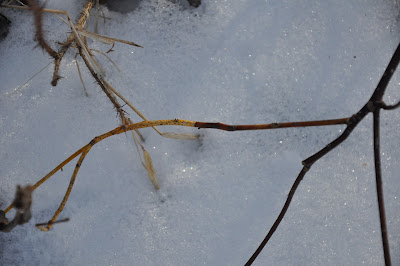 The trail we were following had now looped back on itself and we were retracing our earlier steps.  While seeing a place from the other direction can make it look completely different, I had hoped to not have to walk down the same path we followed out.  Luck was on our side, for we were doubling back only a short distance when the Pink Diamond Trail split off...it took us down a gentle slope and around the hill we had climbed earlier in the morning.

Evidence on this downed log indicated that this trail was commonly used - plenty of claw marks indicate where small mammals (fox?  cats?  fox squirrels?) have jumped on top before crossing to the other side. 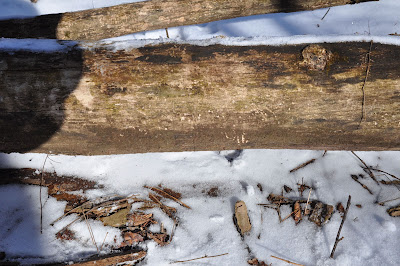 As we rounded the base of the hill, the Pink trail rejoined the Blue trail, and soon we were back at the car. 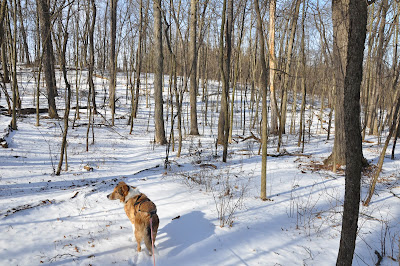 We had a good two hour jaunt on the trails of LefGlen, and I know I will return this spring to see what flowers call this sanctuary home.
Posted by Ellen Rathbone at 11:06 AM