Waking to a World of White

Yesterday we awoke to a dusting of snow.  Today we woke to a world of white.  Not just any old white, but Snowman White!  Yes, it is snowman snow - heavy and wet.  I was sorely tempted to make a snowman, but time wasn't on my side.  I may do one when I get home tonight, though.
Anywho, here's the view out the kitchen window over the sink - the birds were very happy when I went out and filled the feeders. 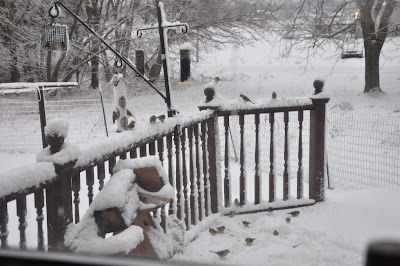 And here we are looking out the other kitchen window, which looks out over the driveway and toward the main bird feeding station. 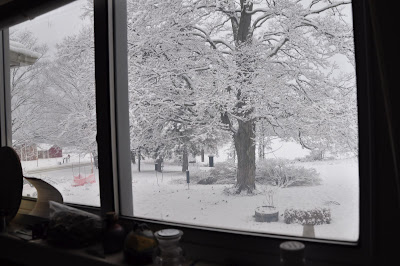 Moving around to the door, we see that the snow is clinging to everything.  The trees looked positively lacy. 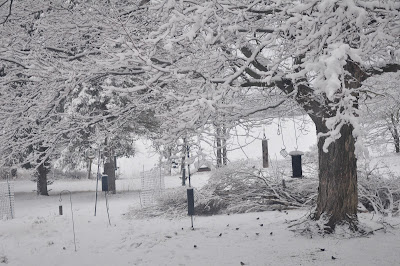 My deer fences are looking a little worse for wear, though.  I really should've knocked off the snow after I took these photos, but I didn't.  Besides...it'll probably melt off in a day or so, if things turn out like the rest of this winter so far. 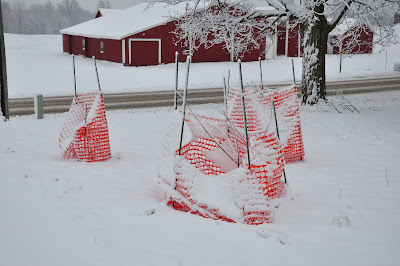 I loved how the collected snow on the upper branches of the lilac sheltered the lower branches - they have practically no snow on them at all.  Ah - now the birds' secret is out! 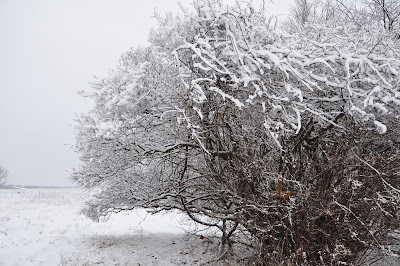 Conifers are built to take the weight of such snow - their branches are pretty darn flexible, which is a plus since a) they keep their needles through the winter and b) they live in snowbelts.  Even so, I still find I feel sorry for them when they are all weighted down under heavy coats of wet snow. 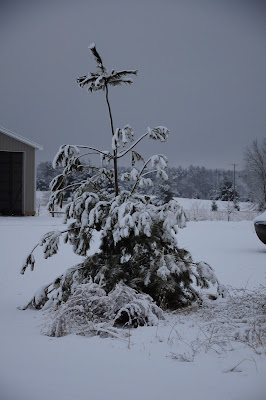 I must say, even the road looked kind of nifty with this snow.  Like I said, it was PERFECT snowman snow - just the right amount of packiness.  Therefore, it was equally perfect for holding the tread patters of passing trucks (and cars). 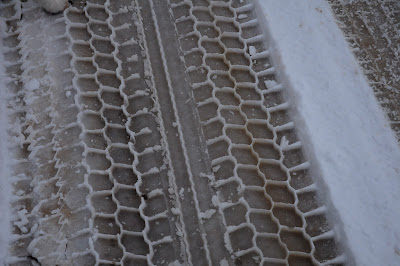 Well, except for sections that were well packed and then stuck to the tires and were lifted completely off the road.  This section is about 8" wide, just to give you an idea of how big it is.  That's a powerful grip. 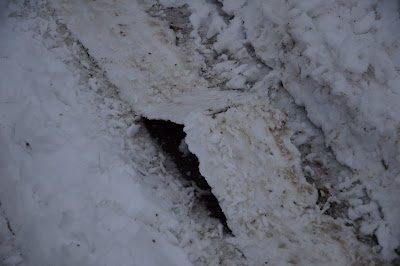 Unfortunately, as lovely as it all was, it was equally dangerous.  As I was pulling out the driveway to come to work, a neighbor stopped to tell me the road was blocked - less than half a mile from the house.  A head-on collision, apparently.  So, I had to go "around the block", driving two miles to get a half-mile from home, down the rutted, unplowed, dirt roads covered with slick snow and slush.  I hope no one was injured in the accident.
Posted by Ellen Rathbone at 4:50 PM

Email ThisBlogThis!Share to TwitterShare to FacebookShare to Pinterest
Labels: snow