I was getting ready to leave work early on Saturday, and while standing in front of our Bird TV window, I saw a small dark body dash under the brush pile on the far side of the bird feeding area.  My first thought was "marten!" and I quickly dismissed it because I am no longer in the Adirondacks.  We don't have martens here, and in truth it was too small and too dark for a marten.  My mind decided it was a red squirrel and it moved on.

A couple minutes later I was still standing there, chatting with our weekend staff, when IT came dashing out of the brush pile, making a beeline to the bird feeders.  "Weasel!"

Holly rushed over with the bag, and I grabbed the camera.  Here is what unfolded.

The "weasel" zipped under the birch log and was watching the scene.  Can you see it below? 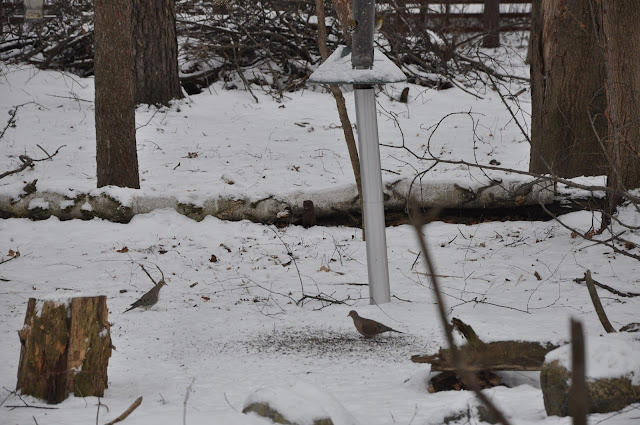 Three cheers for computers and digital photography - we can zoom in and enhance the image.  There it is.  And...it's not just a weasel, it's a mink!  Note the dark fur and the white chin patch. 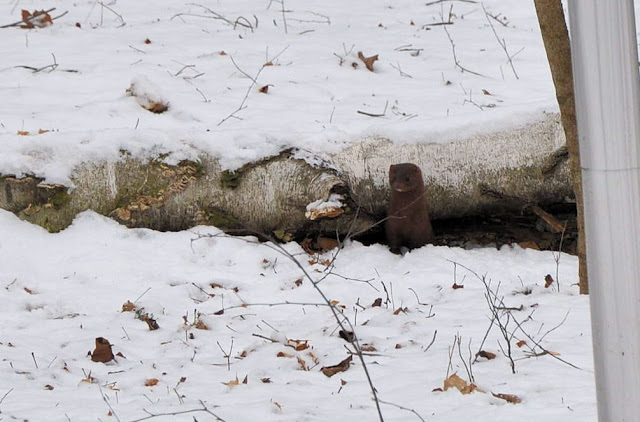 Again, it disappeared, only to pop up at the end of the birch log.  It was on a mission. 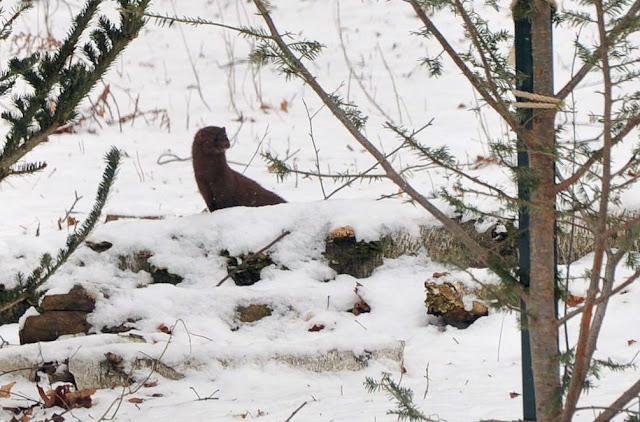 Quick as a flash, it disappeared again.

"It's caught a chipmunk!" Holly exclaimed.

"Where it is?" I demanded, for it was nowhere to be seen.

"It went behind that pile of sticks and it's caught a chipmunk!"  Holly was distraught - she likes the chipmunks.  But how she could tell it had caught one was beyond me...we couldn't see a thing!

But sure enough, within a minute it reappeared behind the snowy pile of sticks with a chipmunk in its mouth: 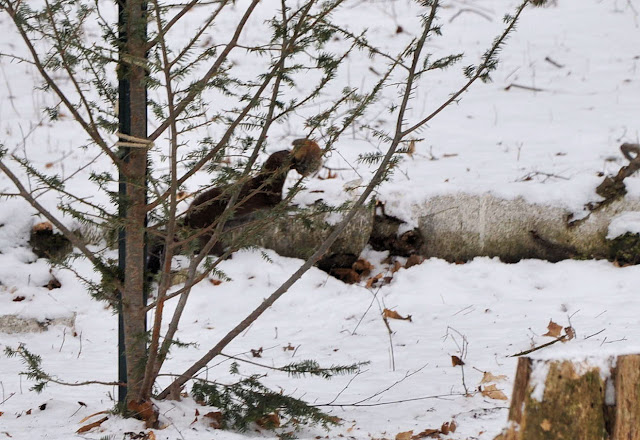 A bit of a struggle ensued next to the tree: 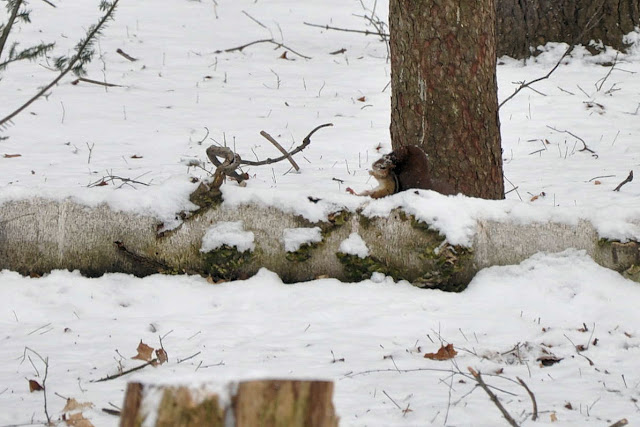 And about a minute later the mink took off again, chipmunk in mouth. 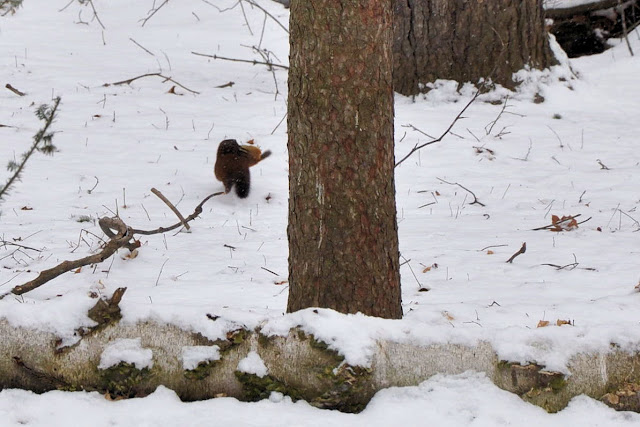 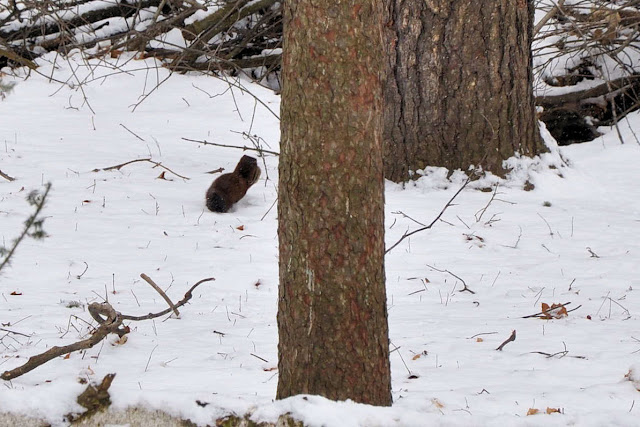 It zipped into the brush pile and Holly and I let out our breath.  Wow.  How cool was that?!?!

We waited and watched for a while, but we knew that now that the mink had a nice plump chippie in its hide-away, it wasn't very likely to reappear any time soon.  So, I decided to go out and see what tracks and trails were left behind, and if I could reconstruct the story.

Here is the pile of stick at which the chippie was snagged.  The snow was not conducive to taking good tracks - there really wasn't much to see. 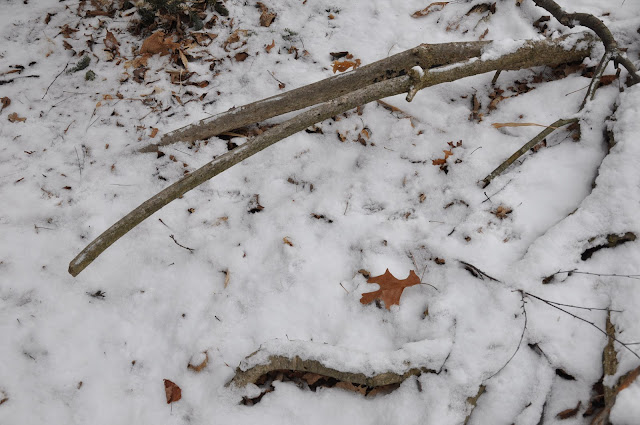 The first sign that anything untoward had happened was a single drop of blood on top of the birch log. 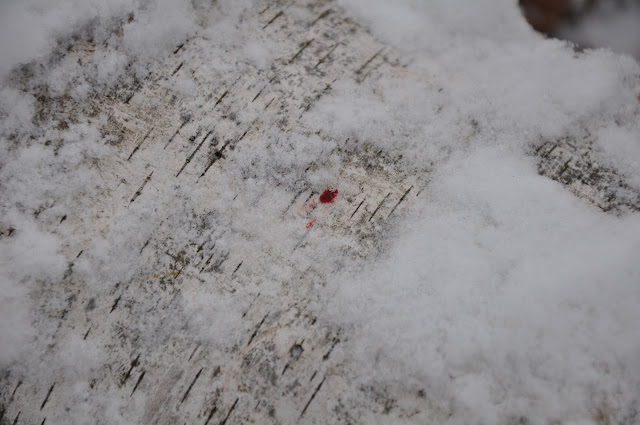 Behind the log was a little more blood and signs of a scuffle.  The chippie was putting up a fight. 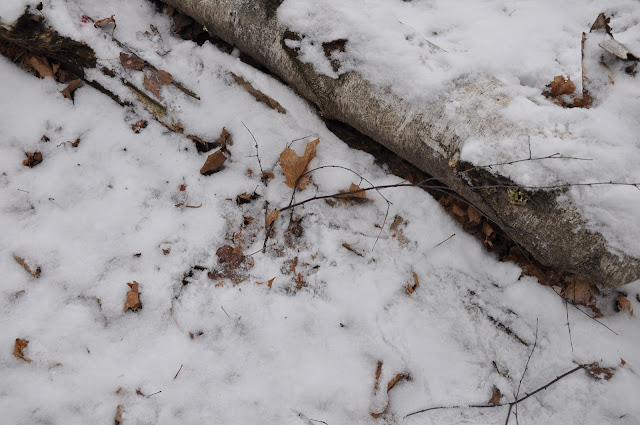 Here was where the mink made its mad dash back to the brush pile with its meal. 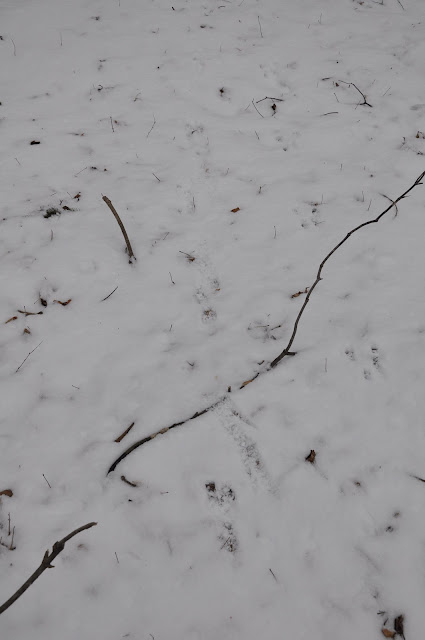 It looked like there were multiple entry/exit holes around the pile - probably more than the mink are using the pile for winter housing.  But droplets of blood by one small entry were a give away. 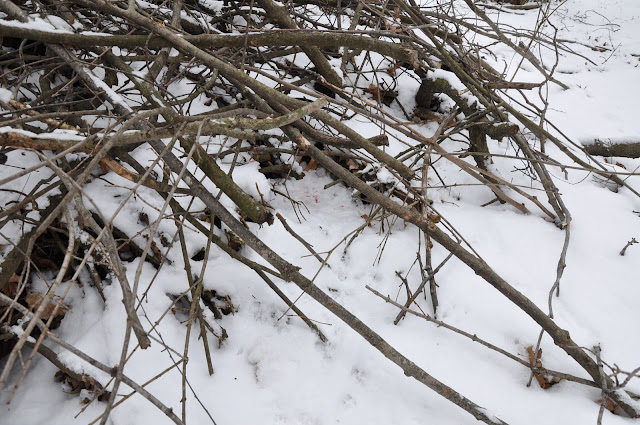 RIP, chipmunk. (Or should we say RIM?) 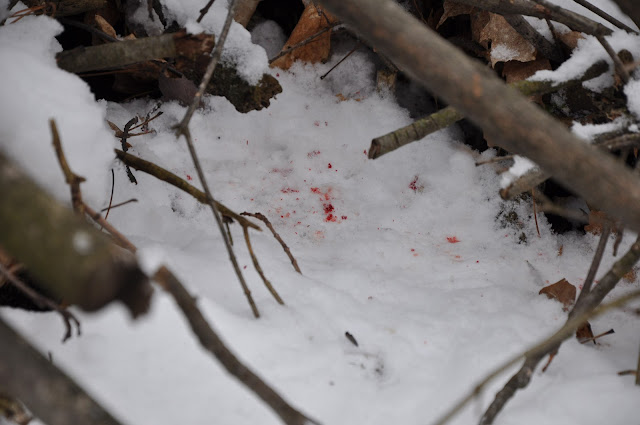