Monday, between periods of threatening grey sky, the sun peeked out and tempted me to go for a walk.  I finally acquiesced, since I was wanting to check out the wildflowers blooming at the Nan Weston Preserve, which is only about 5 miles from my house. 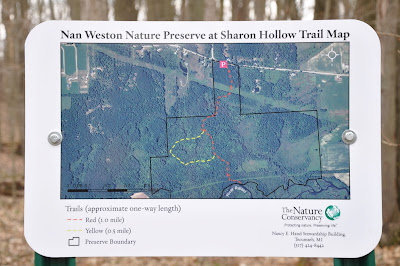 I wasn't the only one to answer the lure of nature that day - one other car was already in the parking area, and another came along while we were in the woods.

Right away the forest was offering up beds of blooming beauties, such as the ever-lovely bloodroot. 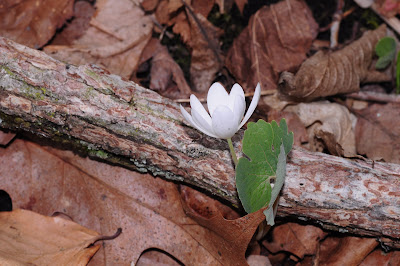 There's just something so pure about the brilliant white petals of this delightful forest flower.  I fell in love with bloodroots many years ago when I discovered a patch down the road from my grandparents' house.  I collected some and planted them at my parents' home, where they have bloomed year after year ever since, but I never again saw them along the road by Grandma's. 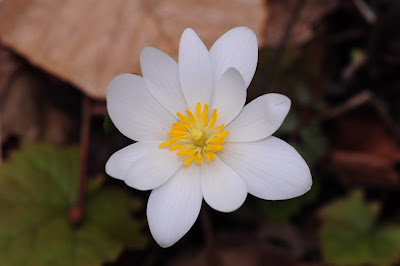 Right by the bloodroot was another flower, which I couldn't quite put my proverbial finger on. 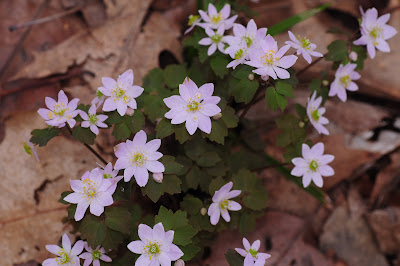 The ripply petals intrigued me, 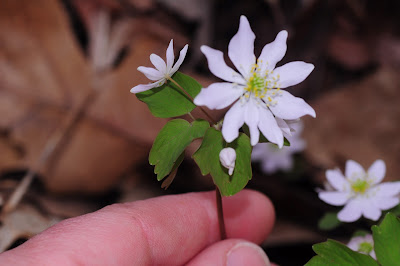 and the leaves were definitely rue-like.  Must be an anemone, I said to myself.  When I finally got to work Tuesday (where my field guide was waiting), I confirmed it was rue anemone, which I have identified before, but only once or twice. 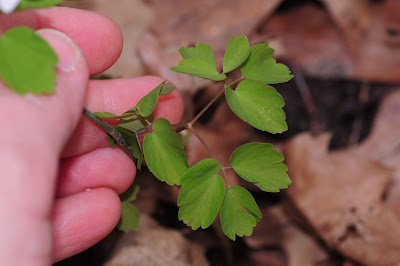 Spring beauties were as lovely as they always are.  Some have obvious pink stripes, while others you really have to look at intently to discern any color on the otherwise white petals.  Do the colors fade with age, or is it just color variation? 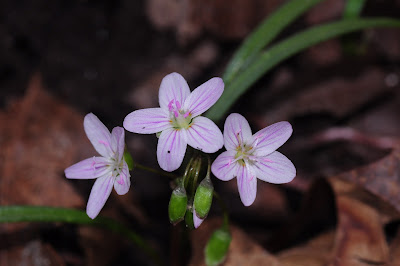 It wasn't quite time yet for the trilliums (trillia?) to be in bloom, 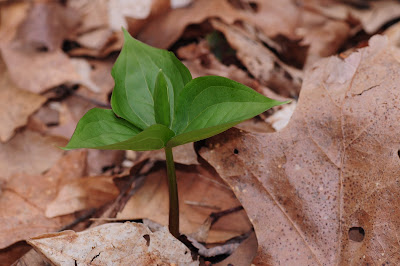 although as the afternoon warmed up, some started to open.  I imagine that this weekend they will be much more prevalent.  I may be returning to Nan on Saturday with one of our volunteers from work, who gave up a trip To Nan Weston yesterday with our Tuesday Group to help me out last minute with a school program.  It's the least I can do to say thank you! 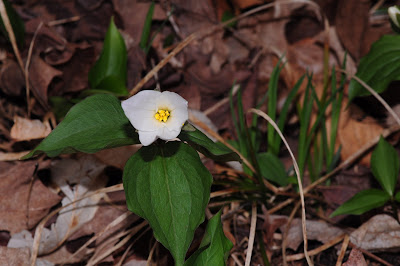 Likewise, the mayapples were just starting to poke their heads above the leaf litter. 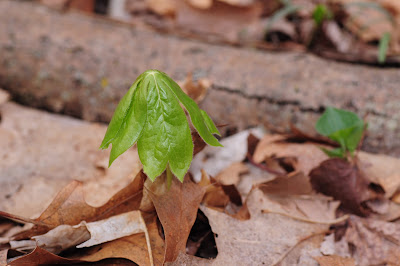 Another flower that was confounding me was this one, which turned out to be purple cress. 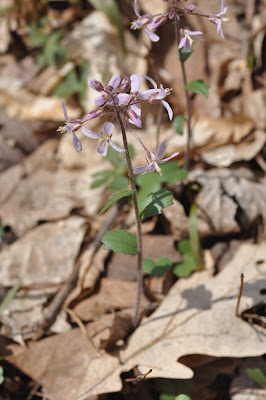 Except when it was cutleaf toothwort. 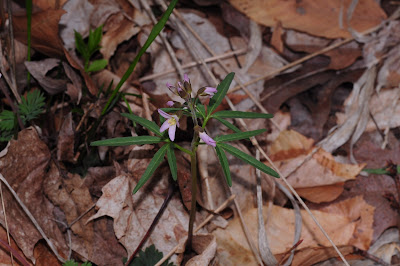 There's also spring cress, which has white flowers, and I swear I saw some of those as well.  These three flowers look awfully similar, and it's the leaves that are key in telling them apart (as well as the petal color, although white and purple can look very much alike, believe it or not).

Soon I was on the boardwalk over the wetland. 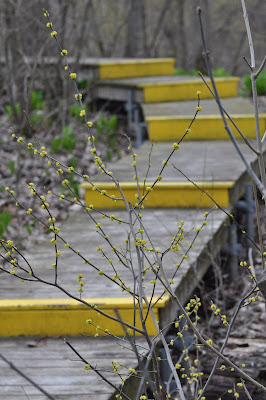 These blooming shrubs were everywhere!  They looked familiar, but I just couldn't place them.  The only thing I could think of was sweet gale, but I knew that wasn't it.  It was the other ladies who were there, who I met about halfway through my walk, who had the answer:  spicebush.  Of course! 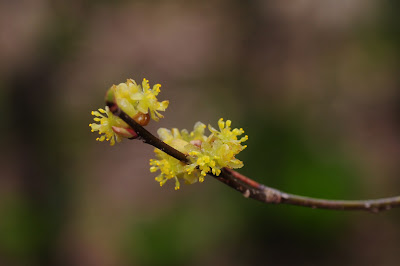 They were blooming in such profusion that the woods had a yellow haze about eye level.  The bright green below is a carpet of skunk cabbage. 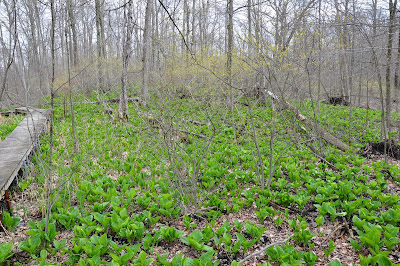 Another blooming shrub, and an old friend from back in the Adirondacks, was American fly honeysuckle.  After spending much of Saturday pulling up invasive honeysuckles during the work bee at work, it was so nice to see this native honeysuckle.  And now that I know it grows here, I will see if I can add it to the native plantings on my property.  Further Update:  One of these days I will learn not to jump to conclusions.  Two people have corrected my error here.  What I thought was American fly honeysuckle, is apparently eastern leatherwood (Dirca palustris).  I've only seen this plant once or twice (back in NY) and the dangling bell-shaped yellow flowers reminded me so much of the honeysuckle, which I had just been discussing with a volunteer that week, that I immediately assumed that was what it was.  Had I looked closely, I'd have noticed that the flowers are not paired, as they are on the honeysuckle, nor are the leaves opposite.  Leatherwood is a native shrub, and one that deer apparently dislike, possibly because of the tough bark, but also very likely because of the chemicals the plant produces, which can cause an upset tummy, if not worse.  This plant is now permanently ingrained on my grey matter...should have no problem identifying it in the future. 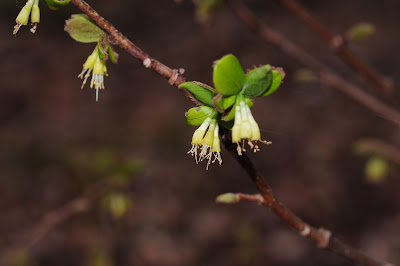 This thorny shrub, with the very strange flowers, remains a mystery.  It's not black locust, although the thorns suggest that it is, and I'm pretty sure it's not one of the buckthorns.  Our stewardship guy at work is also confounded by it.  Does anyone know it?  Update already!  Thanks to Jane, we have concluded that this is prickly ash!  Prickly ash is a tree I did not know prior to moving to Michigan, except by name.  We have some along the trails at work, along with a sign that calls it the Toothache Tree - chewing on the twigs will numb your mouth, apparently.  I've never tried it...but I bet I could get a kid to do so!  Apparently I need to spend more time on the trails at work, getting to know our native vegetation a bit better. 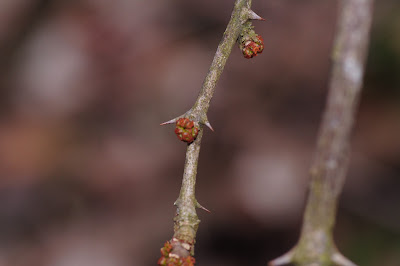 Here are the flowers up close...apparently not quite open yet, but soon. 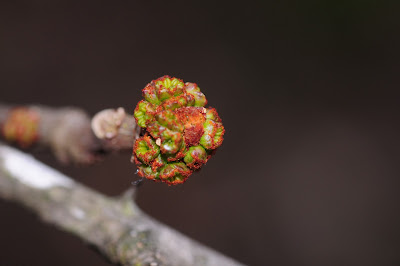 Now, this flower may have purple buds, but it is golden ragwort, a brilliantly yellow plant of the damp woodlands around here.  Soon they will be open and covering the forest floors with their golden glow. 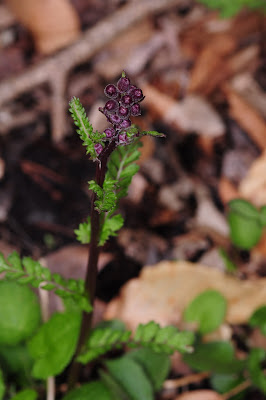 It was still a bit early for the dwarf ginseng, but maybe by Saturday it, too, will be open. 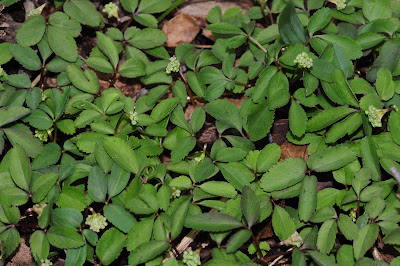 For some reason blue cohosh has always intrigued me.  I don't know why.  Perhaps its the blue-ish purple-ish cast to the leaves and the odd little flowers.  It was juuuust starting to blossom on Monday.  I expect we'll see more on Saturday. 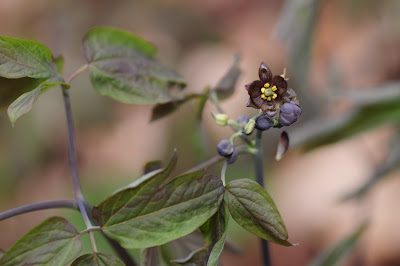 The wetlands were full of marsh marigold - another brilliantly YELLOW! flower - I don't think it could be any more yellow than it is. 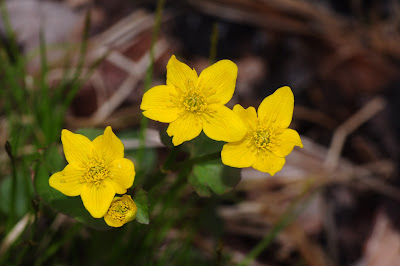 I think Monday was the peak for Dutchman's breeches, for they were in full bloom in every clump I saw.  This relative of the garden-variety bleeding heart puts the domestic plants to shame. 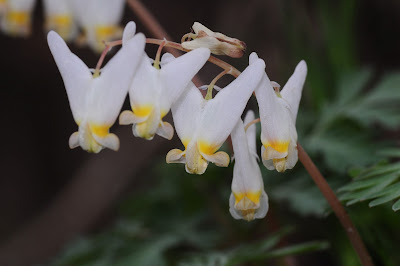 There were plenty of hepaticas in bloom, too.  I believe they were mostly (if not all) round-leaved hepaticas.  Some were deep purple like these, while others tended toward lavender, pink or white. 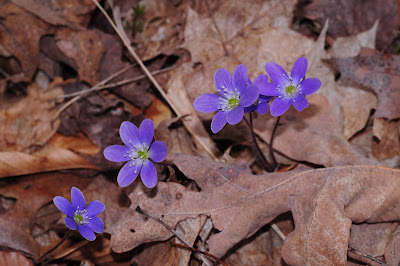 There were plenty of birds singing and flying around, but since I always struggle to see the birds, I concentrated instead on the other flying creatures:  the insects.

Lots of bees were buzzing around - including some very large bumbles.  I'm on a kick right now to learn some of our native bumble bees, especially since they are in decline.

This bee is not a bumble, but I'd be willing to guess it is one of the Adrenas. 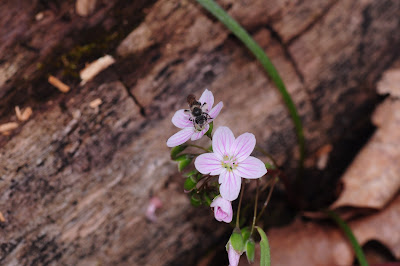 This very handsome spider crawled out on the board walk to soak up the sun next to me.  I left him alone, and he left me alone, although I think I piqued his curiosity when I zoomed in on top of him with my macro lens - he turned to be sure he was facing me, just in case. 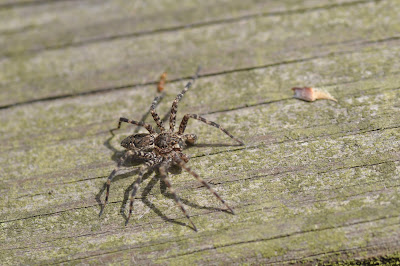 This insect is one that tickles my fancy for some reason:  the bee fly.  It's a very fuzzy yellowish fly, with long narrow wings and a very long proboscis.  It buzzes very loudly, and to the unknowing, it comes across as a bee.  There were several zipping about all over the place, but they never stayed still long enough for me to photograph!  I captured this blurry shot as this one kept returning to check out my bright yellow backpack.  Can you see it in the middle of the shot? 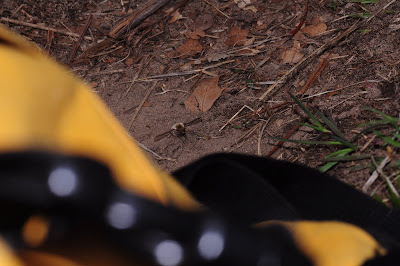 By the time I left Nan, the sun had opted to stay out.  I returned home and decided to join the masses by mowing at least part of the yard.  Ah, yes - the mowing season has finally arrived.  Huzzah (she said, with a definite lack of enthusiasm).
Posted by Ellen Rathbone at 11:06 AM