Last Day - Heading Back to MI

After spending a couple days with my folks, I had to return to Michigan...I had camp interviews to conduct on Monday.  So Saturday morning I loaded up the car and was westward-bound.  I picked up the Thruway north of Oneida, and as I reached the Finger Lakes Region I saw the signs for Seneca Falls and the Women's Rights National Historical Park.

For years I've been saying to myself "I want to go there some day," thinking I'd be living the rest of my life in New York and the opportunity would always be there.  Never count on "some day" - unless you make "some day" today, it will never happen.

So, spur of the moment I slowed down and took the exit for Seneca Falls. 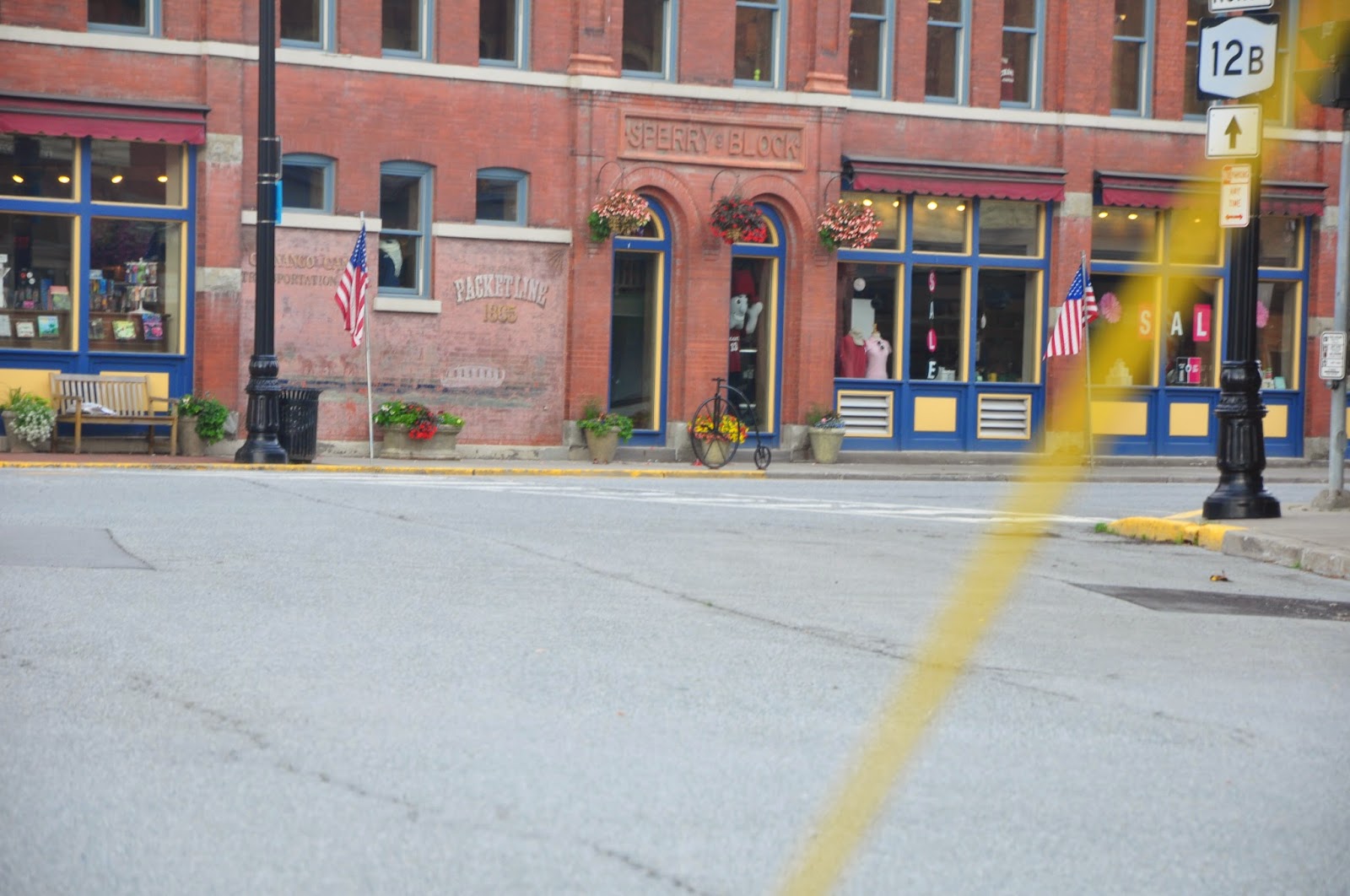 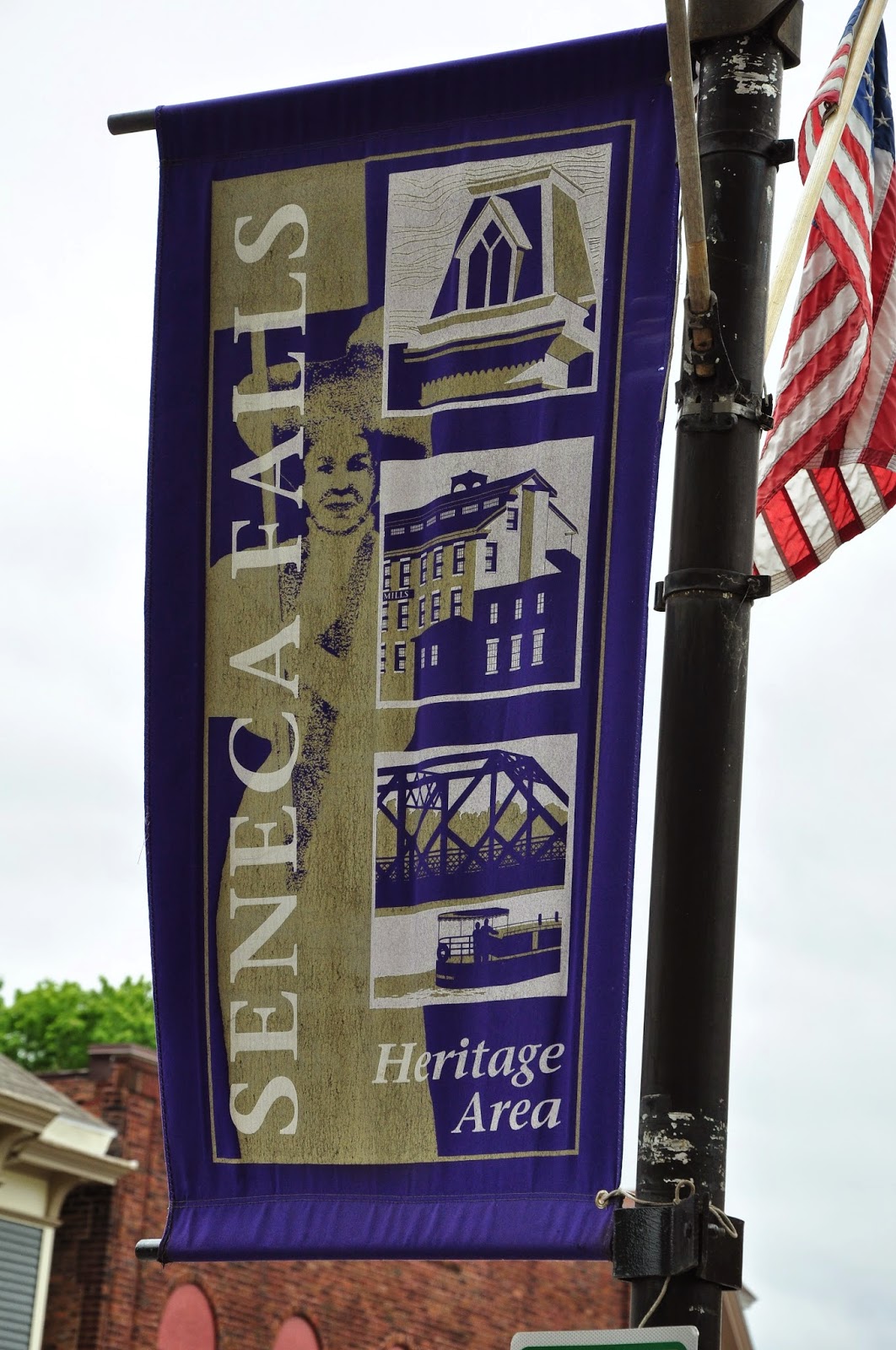 It's not a large national park...although it has several sections.  In downtown Seneca Falls is the headquarters of this national park, with a small museum, a couple little parks, and the Wesleyan Chapel. 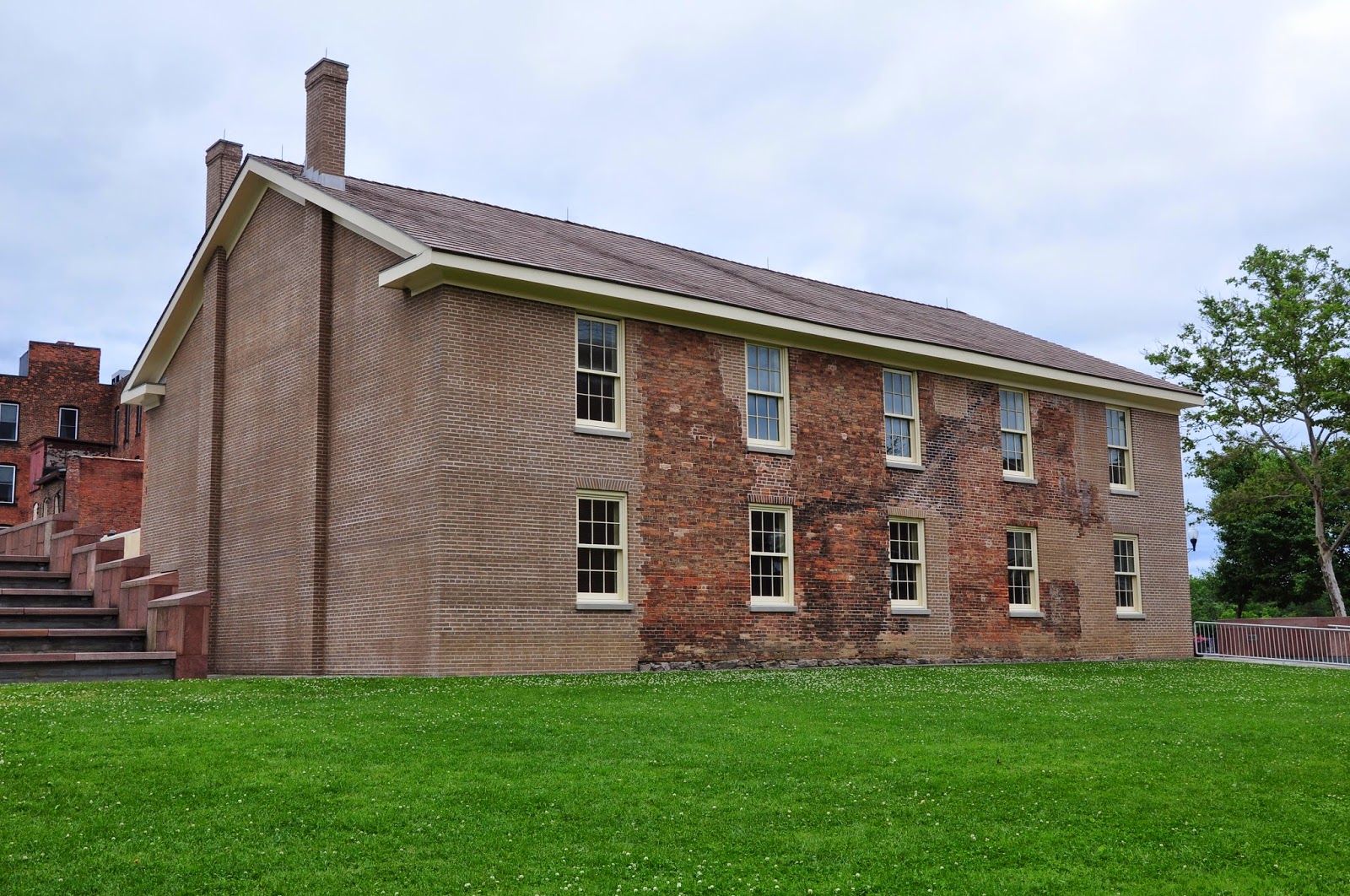 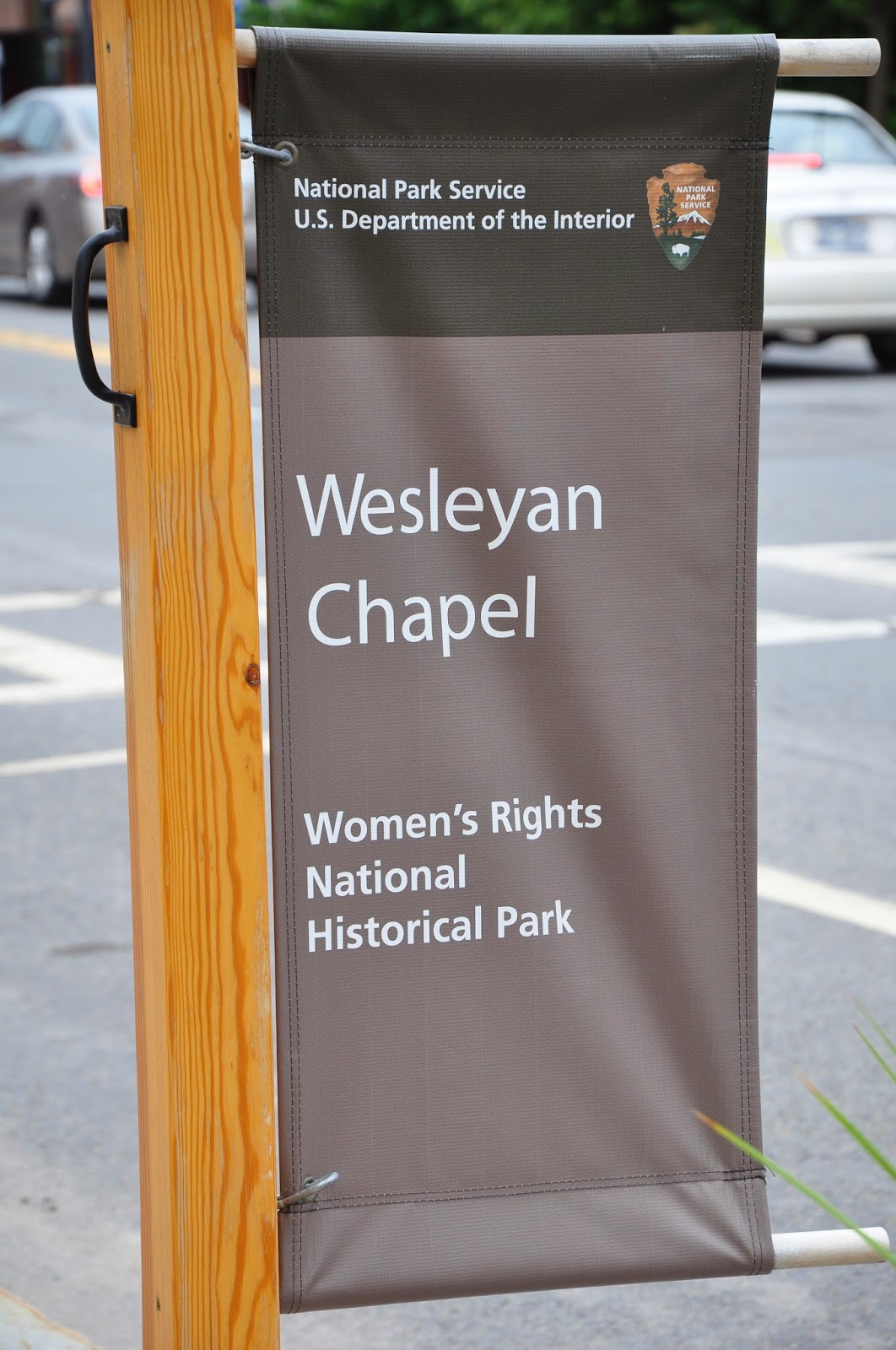 It was here, at the chapel, On July 9, 1848, where the first Convention occurred and speeches were made for women's rights.  Elizabeth Cady Stanton, at the time relatively unknown, read the newly drafted Declaration of Sentiments, based on the Declaration of Independence.  This document declared that all men and women had equal rights. 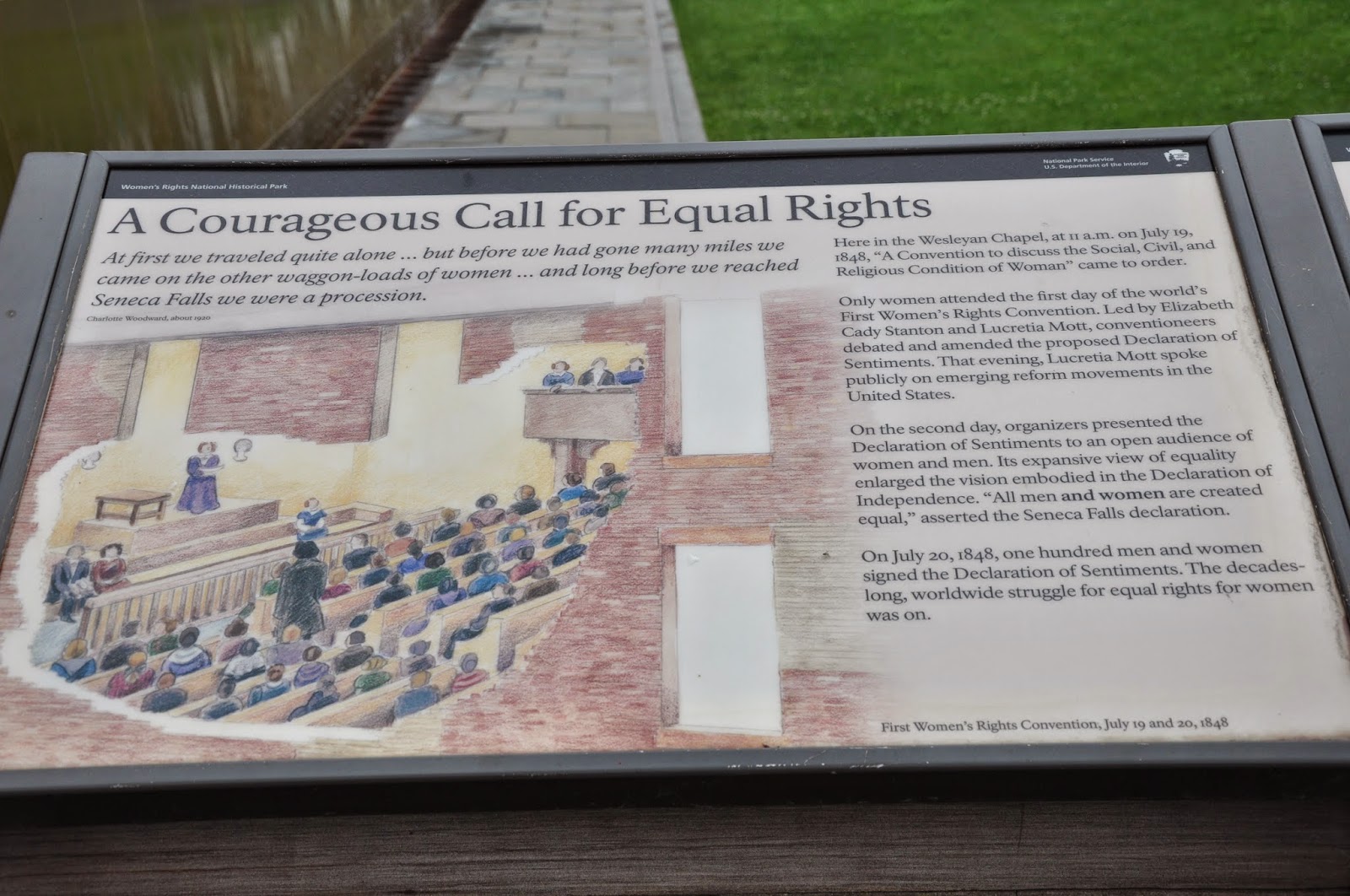 Inside the museum, one is immediately struck by the life-size bronze statues that grace the lobby. 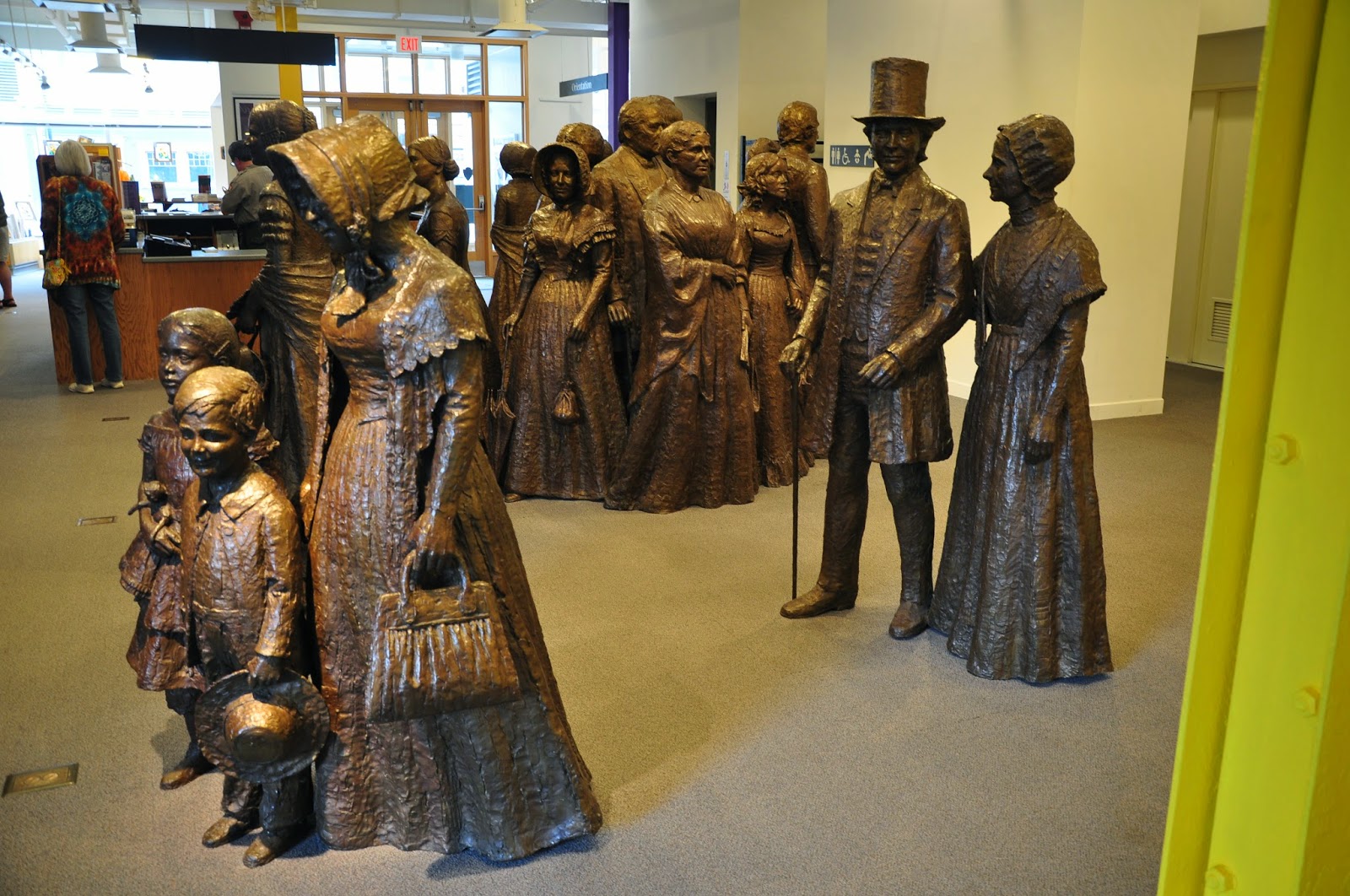 Many (if not all) of the figures are real historical people who were involved in the Suffrage Movement, including Frederick Douglas. 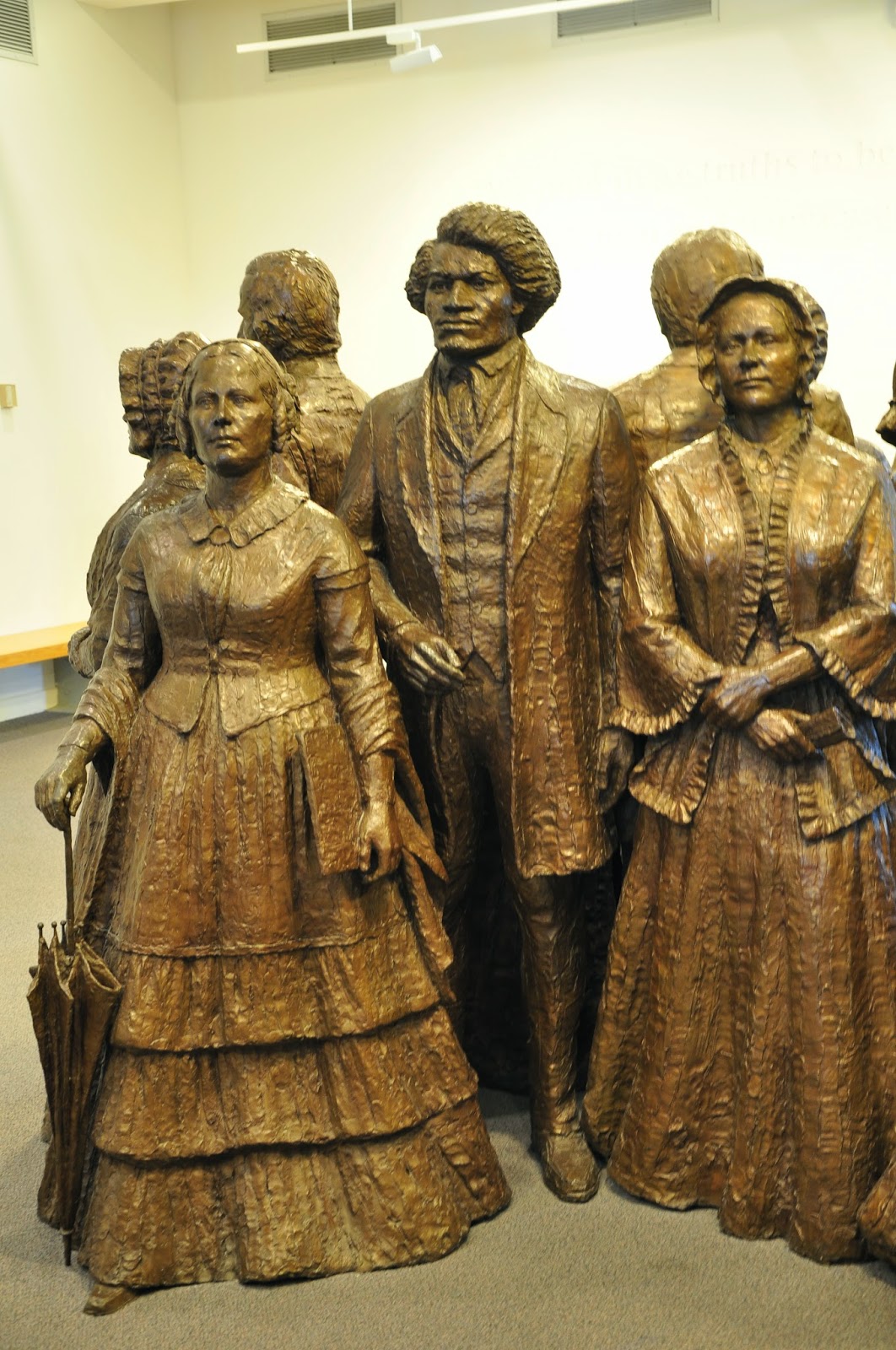 Between the museum and the chapel is a little grassy park with a wall running along one side.  This wall is a water feature, with water sheeting from the top and down the face, upon which is inscribed the Declaration of Sentiments and the names of all the people who signed that historic document. 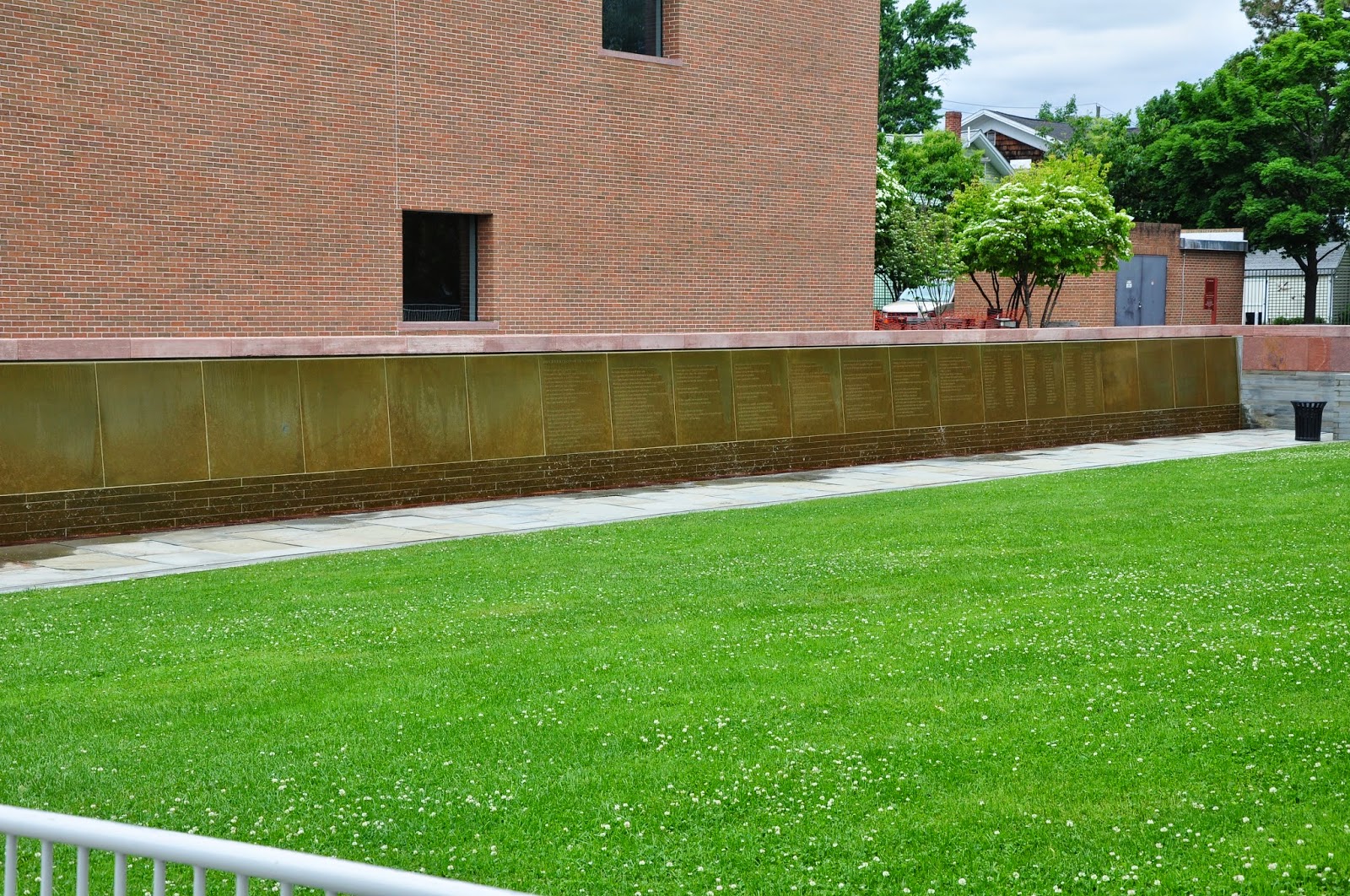 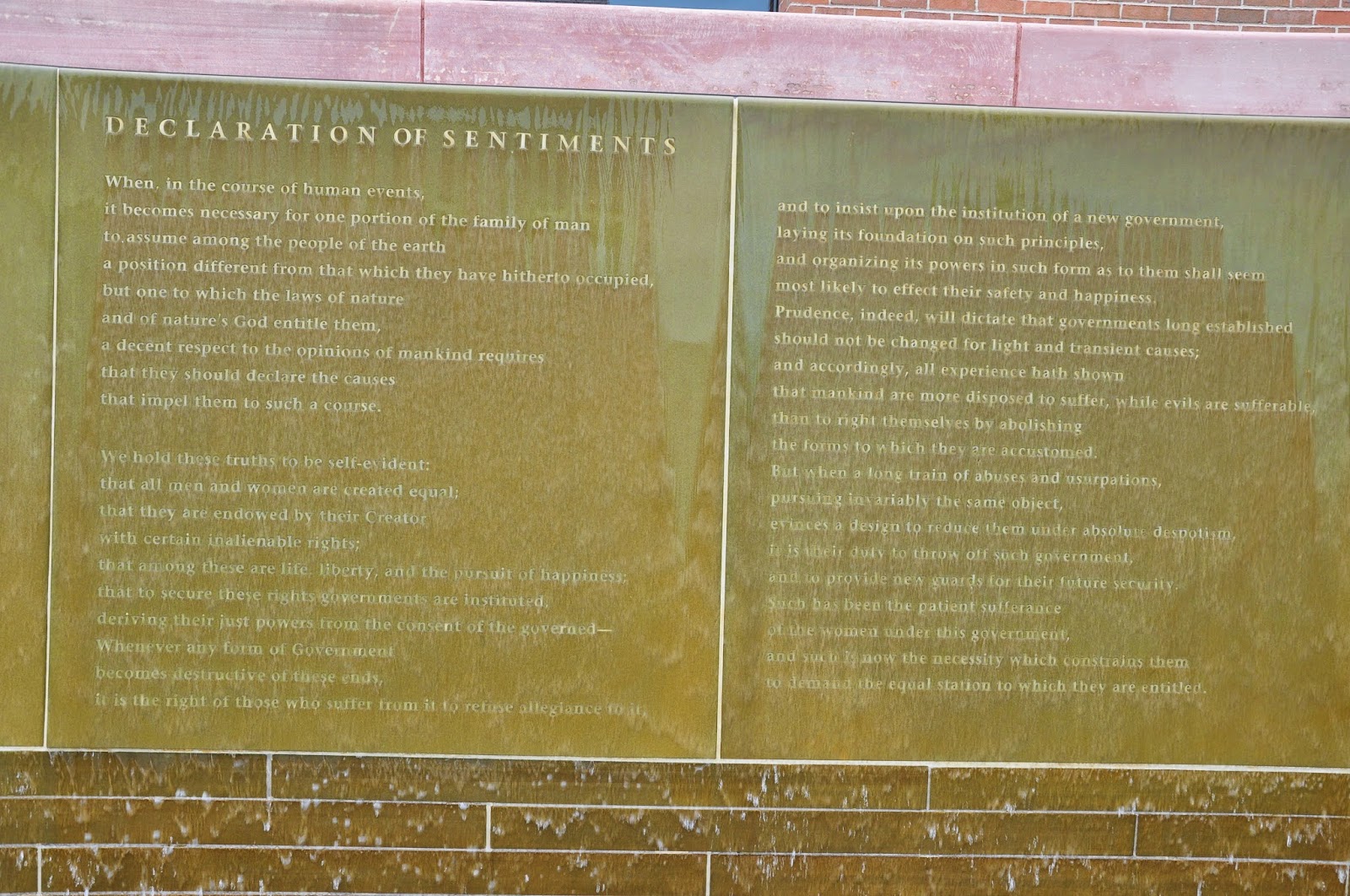 I sat in on the talk the park ranger gave at the chapel, which was interesting.  From there the ranger was driving to the Stanton home, and then one of the other homes outside of town that make up part of this spread-out park, but I needed to be on my way.

I did pick up a little treat for myself, though.  This is Buddy the Bison - a clever gimmick the National Park Service has put out to get kids interested in going out and visiting our Parks.  It's kinds of like Flat Stanley:  you take Buddy to various locations (presumably National Parks) and take his picture to show where he has been.  I love the idea, so I had to get my own Buddy.  And here he is, at his first tourist destination:  the Women's Rights National Historic Park in Seneca Falls, NY. 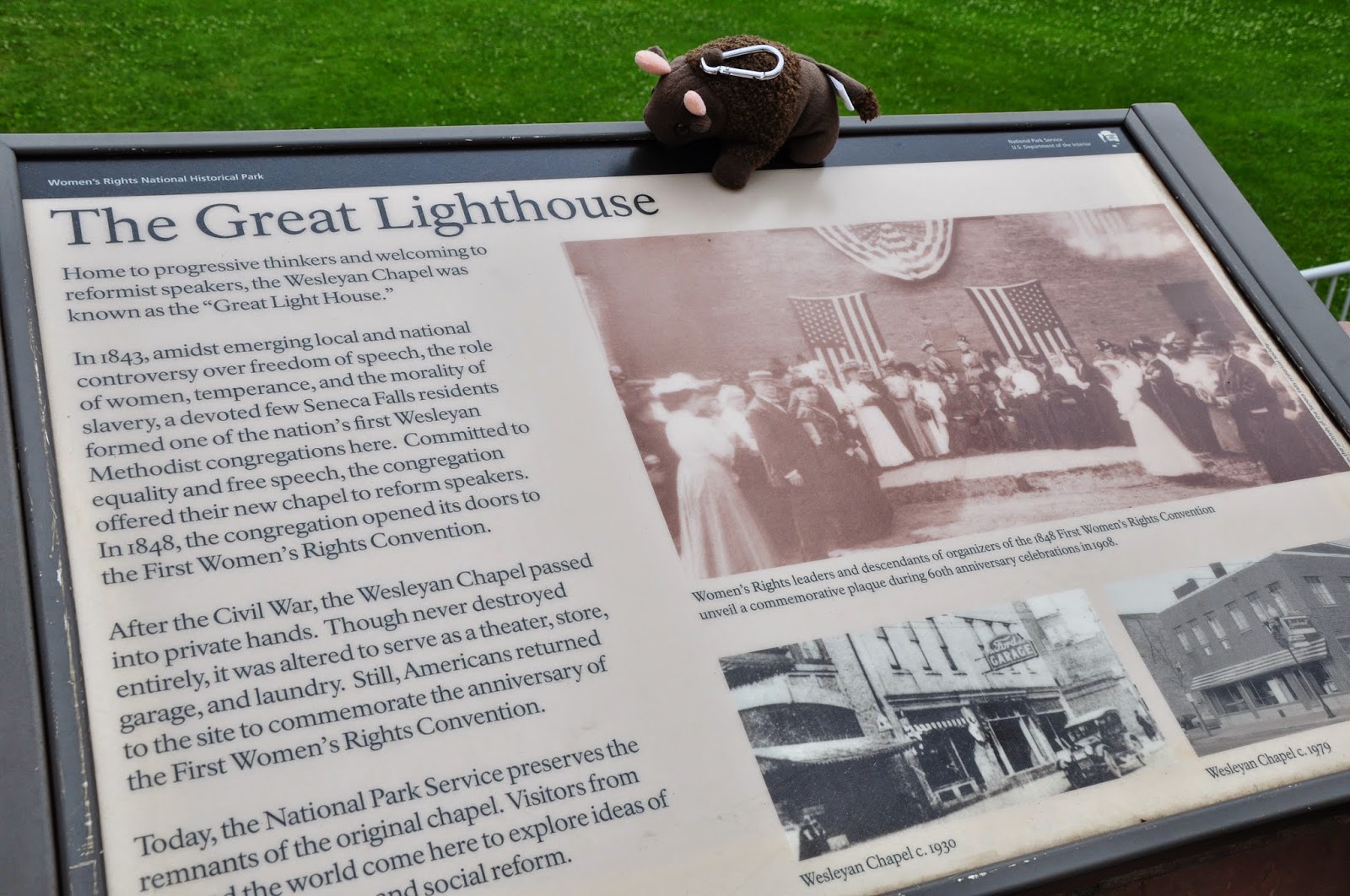 Watch for the further adventures of Buddy and Ellen!

Posted by Ellen Rathbone at 4:06 PM

Email ThisBlogThis!Share to TwitterShare to FacebookShare to Pinterest
Labels: Buddy the Bison, history