I am particularly fond of weasels. I used to have pet ferrets, so I find weasels to be endlessly fascinating. Sadly, most of us rarely get to see these slinky mammals.

Here in the Adirondacks, we have six native weasels: short-tailed (aka: ermine), long-tailed, mink, marten, fisher, and river otter. I have been lucky to have seen each species over the years I have worked as a naturalist, the last to be added to my life list being the marten.

Both the short- and long-tailed weasels are quick-change artists: they are brown in the summer and white in the winter. And both sport a black tip on the end of the tail. The least weasel, which may or may not be present in the northern most part of the state, turns all white in the winter. The only time I have seen a weasel in its winter coat was unfortunately a roadkill. Never-the-less, their tracks abound in the winter snow.

I must say I was very disappointed with my first mink. Somehow, in my mind they were much larger than they are in reality. I suspect this was due to mis-identification of critters when I was young. Still, minks are the weasel I have probably seen the most. My most memorable mink encounter was a couple winters ago. I was snowshoeing along one of our trails at work, and I stopped to look into the water along the bridge crossing the Rich Lake Outlet. As I looked, I saw a string of bubbles rise to the water's surface. Within moments, a mink surfaced on a rock, shook, and dove back in, only to re-emerge a short distance along. It scooted across the rocks and into a hole near one of the bridge's supports. Over the course of that winter, I kept an eye on this location. Come summer, this mink had an entire family with it - five young and two adults were now seen swimming and feeding around the bridge. 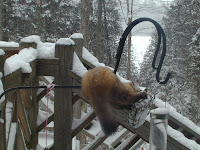 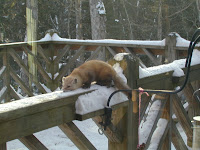 The marten, ah, the marten. The photos here are of my first marten. About four winters ago I had put out some homemade "suet" at our bird feeding station here at work. A marten discovered this mix and for a few weeks was almost a daily visitor to the back deck. That was definitely the Year of the Marten, for not only did I see this one, but I frequently saw one down near the town's pump house along the Hudson River when Toby and I went for our walks. FYI: the marten, AKA the American marten (Martes americana), is often mistakenly called a pine marten (Martes martes). The pine marten is a species from northern Europe. Two entirely different species. One should consider oneself lucky if one sees a marten - they are very secretive animals.

Our other very secretive weasel is the fisher. This weasel is our largest native land-dwelling weasel. We have a beautiful taxidermied specimen at work of a male that weighed about 19 pounds. This was an exceptionally large fisher. I've only seen a fisher twice, and both times they were in the road. One dashed across the highway in front of my car early one spring morning as I was driving to a meeting. The other was feeding on something in the middle of the road one blizzardy winter night over near Long Lake. Both the marten and the fisher were hunted almost to extinction in New York. Today, thanks to the DEC and it's wildlife management programs, both are recovering well. As a matter of fact, the fisher has even expanded its range beyond the Adirondacks, and it accounts for many of the supposed "black panthers" people spot down state.

Lastly, we have the river otter, our most playful of mammals, and our largest weasel. This water-loving weasel keeps a large home range, often travelling several miles up and down it's chosen watercourse. I've only seen an otter once since I've been up here (captive ones not counting), but I see their tracks and slides all the time along the trails here at work.

Fun Weasel Fact: weasels have five toes on their front feet as well as their back feet. This can help you identify weasel tracks (if you can actually see footprints). More on animal tracking to come.

Posted by Ellen Rathbone at 9:45 AM