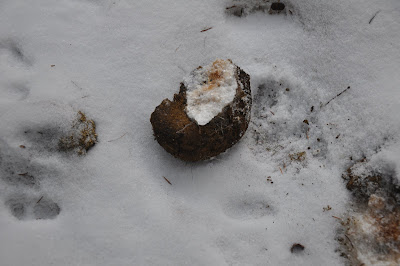 It's great to have contacts. I finally sent the above photo to Charlotte over at the Adirondack Ecological Center to see if she knew what it was.

A quick recap: I found this brown ball of stuff at the site where a deer had been consumed by (probably) coyotes. My first thoughts were that it was part of the innards, but the fine texture reminded me more of fecal matter, albeit fecal matter from a domestic animal that eats processed food. As it turns out, I was both right and wrong with both guesses. Here's what Charlotte had to say:

"Your deer gut photo looks like the rumen...not the organ but what was in the rumen. Pretty typical for coyotes and what-have-you to not eat it. Pretty vile (or bile). We see that a lot around carcasses."

So, it wasn't an organ, but it was from the innards. It wasn't scat, but eventually it would've been once it was thoroughly processed.

And there you are!
Posted by Ellen Rathbone at 9:55 AM

Email ThisBlogThis!Share to TwitterShare to FacebookShare to Pinterest
Labels: deer