Another Day at the Ice Meadows

Tuesday dawned with a pea soup fog. I love the fog and how it makes the world mysterious, but it also often signals a hot and humid day ahead - ugh. It didn't take long, however, for the sun to start to burn it off, and by 8:00 AM the blue sky was already putting in an appearance.

I had to go to The City again for an eye appointment, so I left early. The sun hadn't quite burned away all the moisture, yet, and the roadsides were thick with dew-covered spider webs. These are ephemeral works of art, for once the sun hits them, they dry up and their magic is gone.

After passing hundreds of webs, I finally pulled over and got the camera out. I even had a tripod in the car, so I was set! 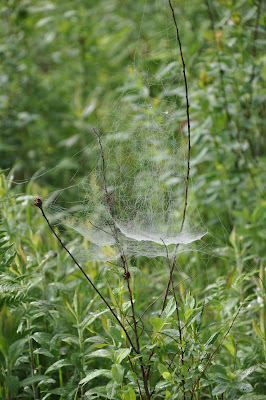 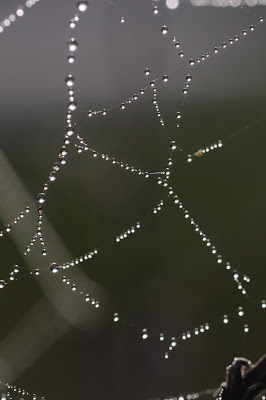 By the time I returned my gear to the car and headed back down the road (grateful I had given myself plenty of extra time), the webs were already vanishing.


Several hours later, with blurry vision thanks to the eye dilation drops, I was headed back to the mountains. It had turned out to be quite a spectacular day after all - not hot and humid as I had thought. I knew I had to stop at the Ice Meadows again, to see the new flowers that were blooming.

My friend Jackie had recently been there and had posted on her blog (Saratoga Woods and Waters) a flower I'd never seen before, and I wanted to see it for myself.

I stuffed my Newcomb's field guide and my tripod into my backpack, slung the camera bag over my shoulder and I was off. A young couple were sunbathing on the rocks, and directed me towards a different path to get down to the cobbles without having to scramble past them.

The first thing to catch my eye (besides the sunbathers) were the roses. Not only were they blooming in pink profusion, but their delicate scent wafted on the wind. 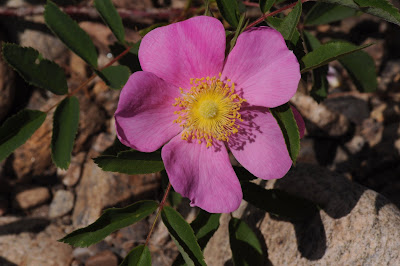 Whorled loosestrife (Lysimachia quadrifolia) was also in bloom. I kept cursing my eyes, for everything was blurry. I had to trust that my camera was in focus when I took each shot. Not only that, but I had to wear my sunglasses because my pupils were still wide open and the world was a blinding glare without them, so I couldn't even be sure I had good exposures. Fortunately, the camera didn't let me down. 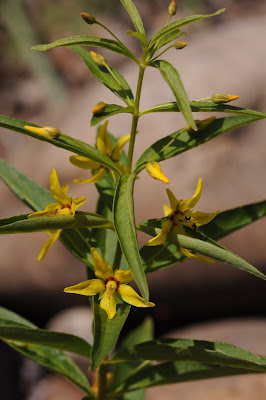 I was totally taken in by this flower, and found myself suffering from a profound case of Speckled Alder Syndrome (only fellow students of Dr. Joel Howard will likely understand that reference). I took photo after photo of the flowers, and whipped out my field guide to ID it. It is seldom that Newcomb's lets me down, and this was one of those times. It was only later when I actually sat back and looked at the whole plant that I gave myself a dope slap - it was red-osier dogwood (Cornus sericea). 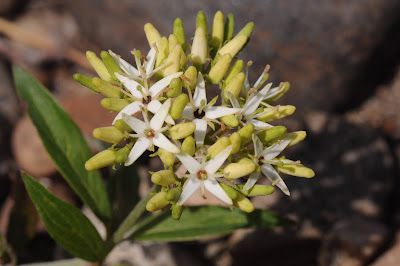 A few blue flag irises (Iris versicolor) were blooming, their delicate petals whipped by the wind, which, of course, was blowing quite strongly. 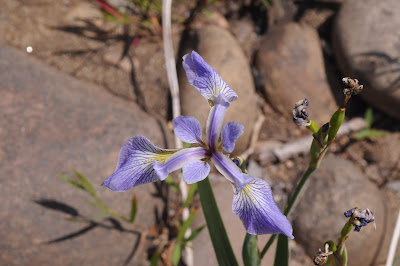 Isn't this bedrock wonderful? And do you see what is perched at the top? 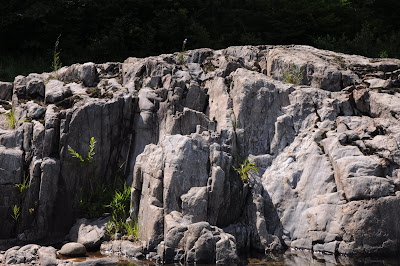 It was a lone harebell (Campanula rotundifolia). I may just use this image on some business cards. 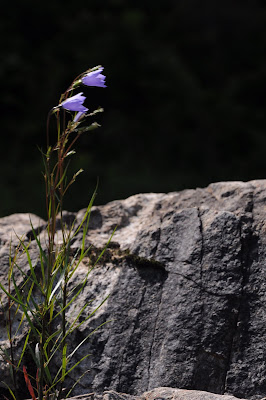 I scared up a couple ladybugs clinging to the vegetation. Just in case they were one of the Lost Ladybugs, I snapped a photo. Unfortunately, this is the seven-spotted ladybug, seven spotted ladybug (Coccinella septempunctata), not one of the lost native species. 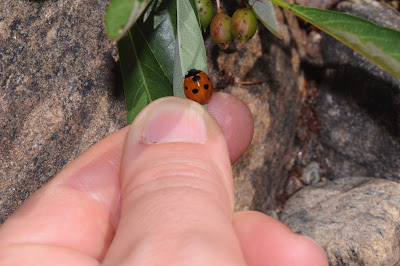 I was surprised to see butterfly weed (Asclepias tuberosa) in bloom. This plant had very yellow blossoms - usually the ones I've seen have been much oranger. A member of the milkweed clan, this native flower is a favorite with many bees and butterflies. 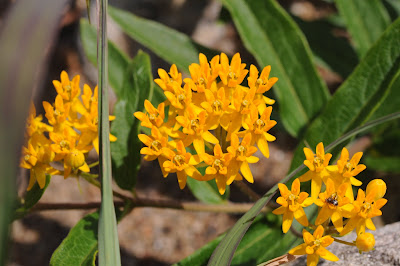 There were lots of signs of people visiting the Ice Meadows. Somehow I doubt that the ones who leave these signs behind are there to enjoy the rare vegetation. 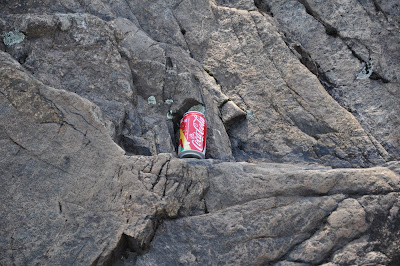 Thanks to our recent rains (about 3" so far this month), the river was running well. 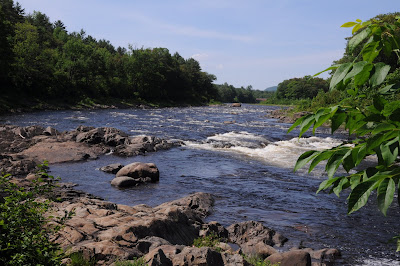 I watched this couple put in their tube and float downstream, with Fido paddling faithfully alongside. 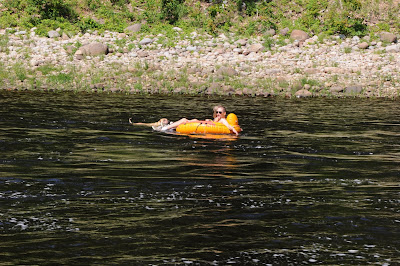 I simply love viper's bugloss (Echium vulgare), even if it is a non-native. The blue and pink coloration is simply a showstopper. 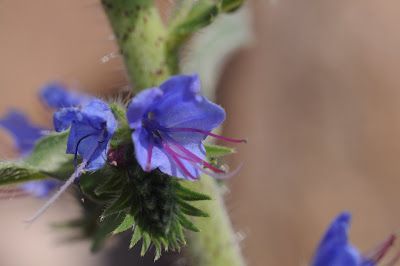 Back in the woods along the trail, I was floored by a carpet of partridge berry (Mitchella repans) in bloom. Hundreds of these tiny white flowers were scattered along the forest floor, like so many stars in the sky. Unfortunately, there was an equal amount, if not greater, of poison ivy. Still, I plunked myself down to get a shot or two. And I was completely surprised by what I discovered: the tiny white flowers are incredibly furry! 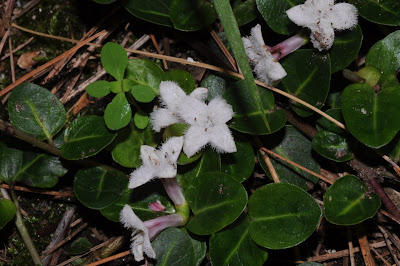 I drove further downstream to another trail leading to the river. This was a gentler incline, with a little less PI along the way. When I hit the cobbled shore, I found some old friends and new.

One plant that surprised me to be in bloom already was ladies tresses, one of the Spiranthes orchids. I don't know which one this is, however. It's really a bit too early for nodding ladies tresses, which is the only one with which I am familiar. I'll send the photo to an orchid enthusiast I know and see if he has a better idea. Update: the general consensus is that this is wide-leaved ladies tresses (Spiranthes lucida), which is the earliest-blooming of the ladies tresses. The thing is, with trying to ID these, is that the leaves don't appear until later in the season, kind of like coltsfoot. Blooming times can be helpful, as can location. 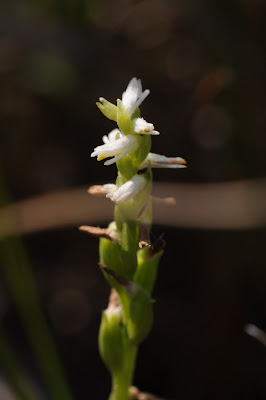 While my mission this day was to add a specific new plant to my life list, the highlight was what occurred next. I heard a peep peep peeping in the grasses. Looking around, my eye caught a swift movement. There, dashing away as fast as its legs would carry it, was a baby sandpiper. Update: I believe these are spotted sandpipers (Actitis macularia). 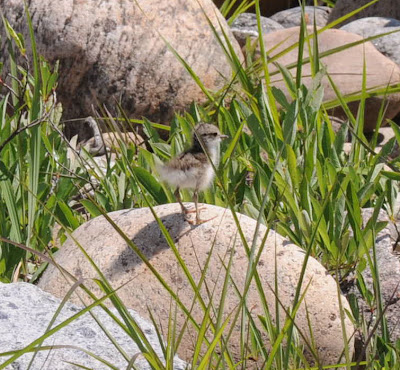 It just couldn't get away from me fast enough, and soon vanished into the vegetation and rocks. Nearby, Mom was calling, either trying to get the offspring's attention so it would come to her, or mine to draw me away. The latter is most likely, since she kept flying back and forth. 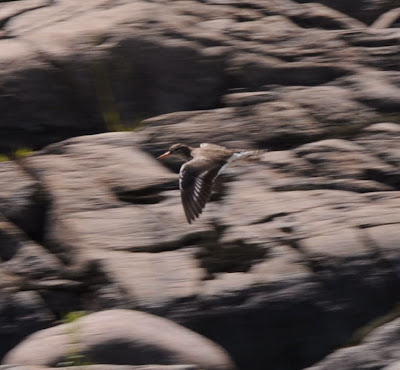 I soon turned around and went back to the little pool. Mom flew back toward Junior and began calling to him again. I watched as the little peep scrambled over the rocks... 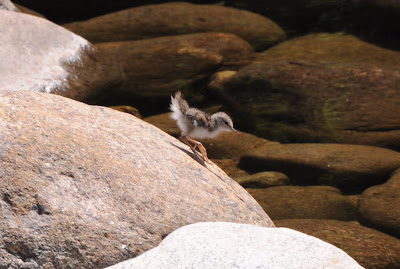 ...and into the water, where it paddled around to the next rock. I always thought these were wading birds, but apparently they can swim, too, or at least they can when they are small. 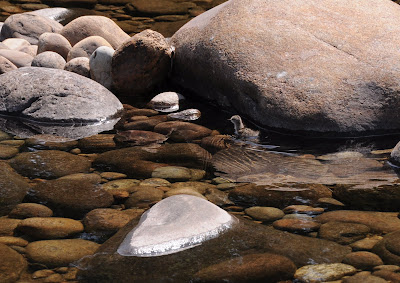 Once more, as soon as it was aware that I was taking its photo, the peep took off for the safety of the shore and vanished. 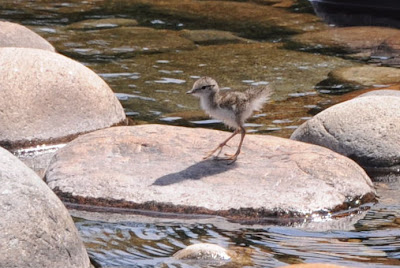 And I did find the flower I sought: sticky tofieldia (Triantha glutinosa), aka: sticky false asphodel. What a beautiful little flower. 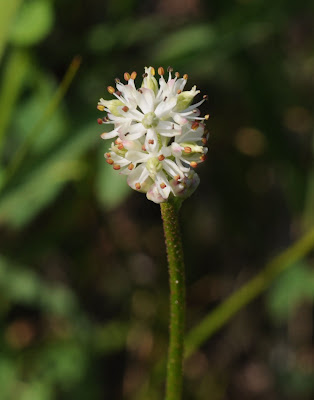 A touch to the stem explained the name. It didn't stick with a glue-like ooze, nor did it grab with tiny barbed hooks. Still, the stem has a sticky quality to it. This delightful plant is listed as an endangered species in New York State - I am thrilled to have seen it, and am grateful for the tip from Jackie! 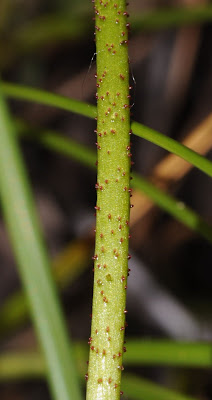 Right by the river's edge, rose pogonias (Pogonia ophioglossoide) were in bloom - lots of them. They may be, like nodding ladies tresses, one of our more common orchids, but I still enjoy seeing them. 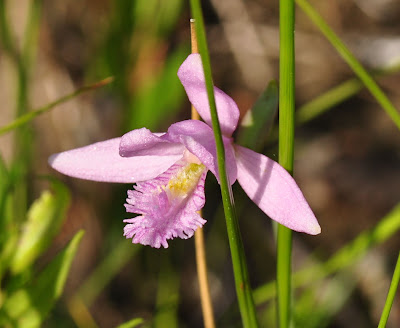 As I was leaving the Ice Meadows (I really did have to get home), I saw one more flower: small sundrops (Oenothera perennis), a small member of the evening primrose family. 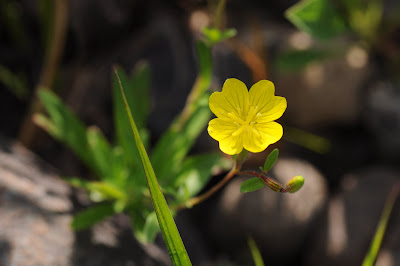 As I drove away, I noticed that much of my vision had returned to normal. Whew! Still, it wasn't until almost 7:00 that I was enough back to normal that I could go outside without the sunglasses. We seldom appreciate the miracle that is our eyesight until we start to lose it, even if only temporarily.
Posted by Ellen Rathbone at 2:26 PM