It wasn't a beautiful day to be out, what with the chilly, spritzing weather, but it was an afternoon botanizing with friends and visiting a new location, so that more than made up for the less-than-ideal weather. The good news, weather-wise, was that the cool weather kept the blackflies at bay, even if the mosquitoes were oblivious.

So, I drove to Minerva to meet Evelyn, who'd invited me to join her, Emily DeBolt (who, it turns out, is one of the owners of Fiddlehead Creek Nursery, the native plant nursery I wrote about a week or so ago), and Evelyn's friend Bob for an excursion in search of showy orchis, which we suspected would be past blooming.

The great thing about going out on these forays with Evelyn is that I get to explore new locations, places that I'd probably never visit otherwise. Today's destination was a private trail that connects to state land, which leads to Stony Pond. It was all uphill going in, but at a leisurely botanizing and photographing pace, the incline was barely noticeable.

Running through this property, and more or less paralleling our walk, was this incredibly lovely stream, called Falling Brook. It cascades down the hill across bare rock that in some places was flat as a pancake, causing the water to sheet across. 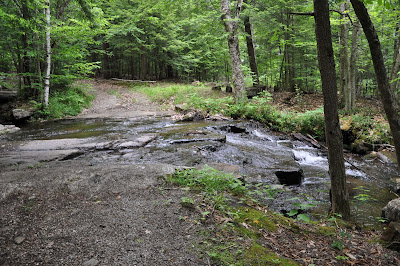 Our first crossing of the stream was via this bridge, which was built for the snowmobiles that use this trail in winter. 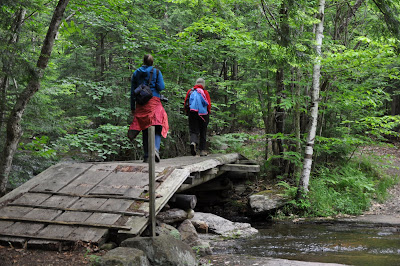 Emily and I were determined to photograph everything that caught our eye. One of the first plants was Indian cucumber root (Medeola virginiana), which has wonderful flowers that are practically inconspicuous as they dangle beneath the umbrella-like leaves. 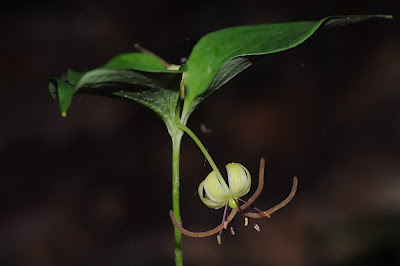 Sweet cicely (Osmorhiza claytoni) was blooming, too. This plant, with its tiny, strange flowers, threw us all for a loop. Three plant people, and not a field guide among us! Good thing Bob had his book, when we found him, and he quickly identified sweet cicely for us. The flowers are less than a 1/4" across - likely less than 1/8"; very very small, making the plant seem quite delicate. 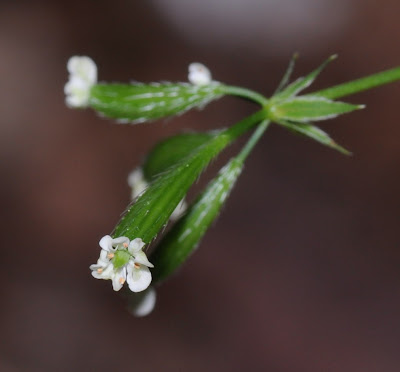 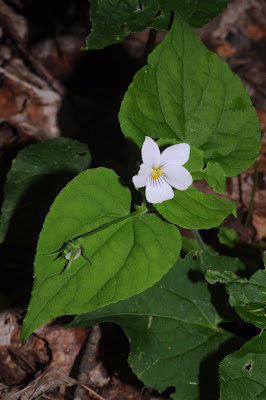 We found a robust patch of sanicle, or black snakeroot (Sanicula marilandica), about which I previously wrote. 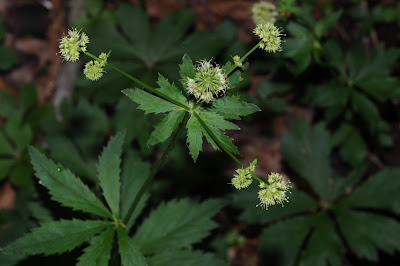 Ferns were, of course, all around us. Some, like this broad beech fern (Phegopteris/Thelypteris/Dryopteris hexagonoptera), were easy to identify. Others, because they didn't have their fertile fronds, were more difficult. Emily was most taken by the rattlesnake ferns, were were growing here in fairly good quantity. 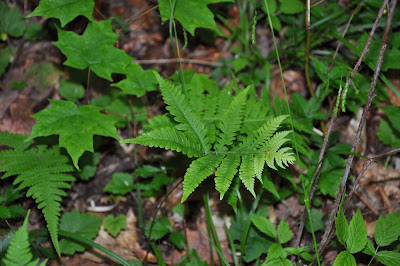 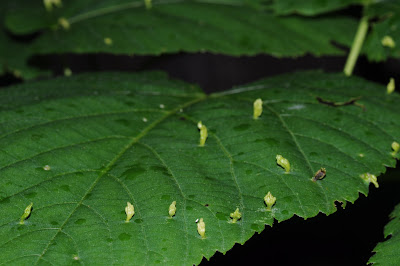 As we suspected, the showy orchis (Orchis spectabilis) were all past blooming. Still, now that we know where they are, and what the plants look like, we can return next year, around the end of May, and look for them again. 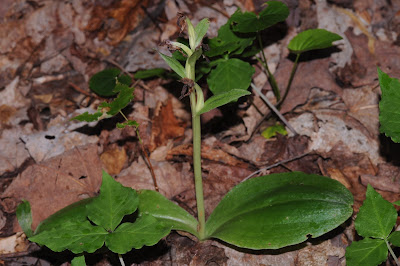 On the way back downhill towards our cars, Evelyn wanted us to take a detour to see the falls. I'm glad she did, for they were spectacular: 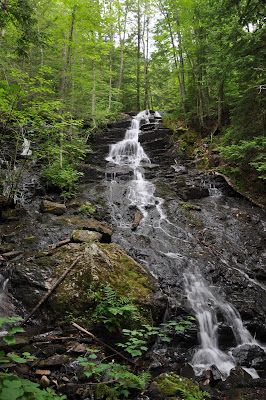 You can't really get an idea of their height here, but they were quite tall. I took some video, which I would post, but I held the camera vertically to take it, and the program insists on posting it horizontally, so the water would look like it's falling to your left. I decided that was just a bit too odd, so you are stuck with the above still photo instead.
Many thanks to Evelyn for another great trip!