What a glorious morning it was! Clear blue sky, a touch of rain during the wee hours, a cool and gentle breeze. I wasn't the only one out enjoying it. The butterfly garden was full of hungry insects, each targeting the blossoms that were being warmed by the early sun. The chives were very popular, with the columbine and roses coming in second.
Here are some of the garden's patrons: 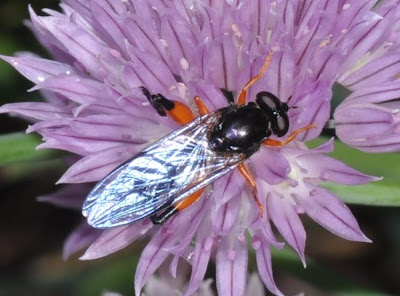 This red-legged fly is one of the many flower flies grabbing some breakfast. It is from the genus Chalcosyrphus, which has many members that resemble wasps not only in looks but behavior. I was relieved when I read this, for my first impression when I saw this insect was that it was indeed a wasp! The tiny paired antennae, however, are typical of flies. A trip to http://www.bugguide.net/ confirmed it was indeed a fly. 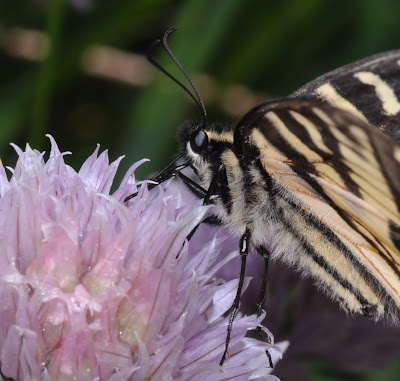 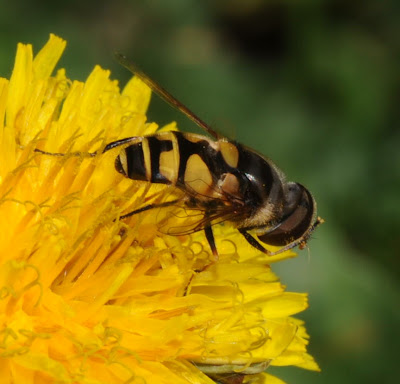 I caught this Syrphid fly in the midst of a bath - note the foot cleaning the eye. 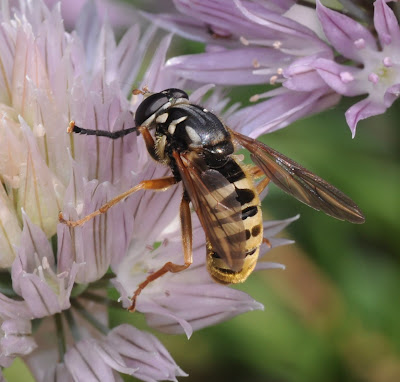 This yellow-jacket-mimicking fly is from the genus Temnostoma. It may be T. vespiforme, which is a highly successful species found not only in North America, but also in Asia and Europe. 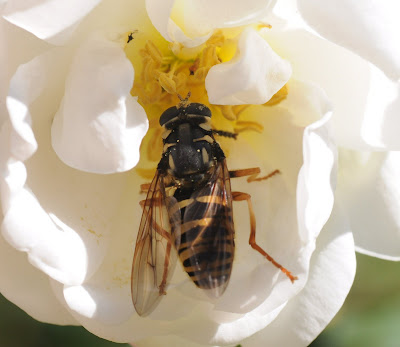 I suspect this fly is the same species as the one above. It was totally focused on the white rose in which it had buried itself. As I watched, it was using its front two feet to scrape pollen from the anthers into its mouth at such a speed one would think it had been starving. Still photos couldn't capture its frenzy, so I tried a video. 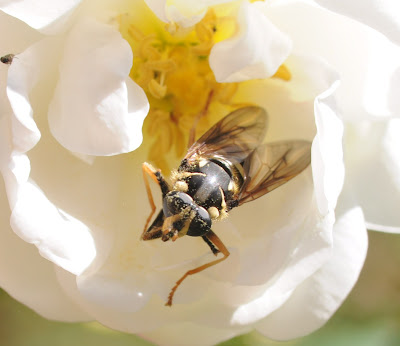 Afterwards, it faced outwards while it cleaned up.
I almost expected to hear it belch. 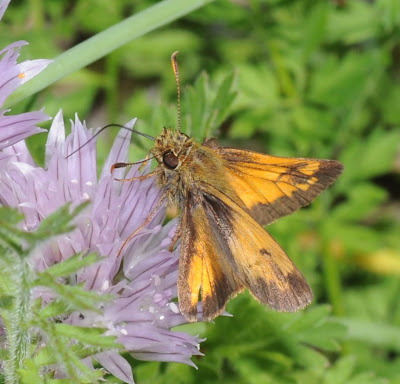 This little skipper, which I think is a Hobomok skipper, was flitting about in a rather nervous way. Fortunately it finally found a good pocket of nectar and sat still long enough for me to get a shot. 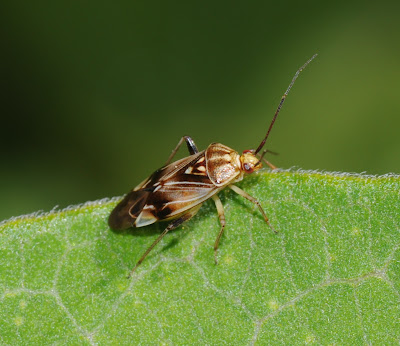 A tarnished plant bug (Lygus lineolaris). This strikingly colored insect apparently exhibits a lot of diversity in its coloration. It's fairly common and feeds on upwards of 400 different species of plants, including conifer seedlings, which is distressng to conifer nurseries. Many agricultural plants are also targets, including apples, strawberries, beans and alfalfa. In other words, it is not a well-loved insect. Still, it is rather attractive.
Posted by Ellen Rathbone at 12:00 PM