A Day Out with Mom

On a whim, I drove to my folks' home this weekend. Dad headed out Saturday for a fishing trip, so Mom and I were on our own. It was simply too nice a day to spend inside, so we went for an explore. Our goal: The Root Glen, an arboreteum at Hamilton College, which is in Clinton, NY, just south of Utica, in the foothills of the Adirondacks. 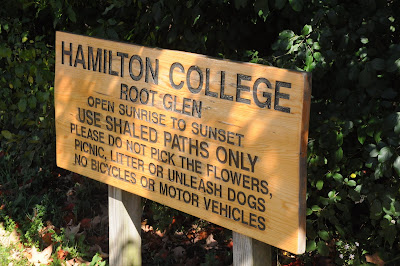 I remember coming here once as a youngster. My grandparents were with us, and it was spring. 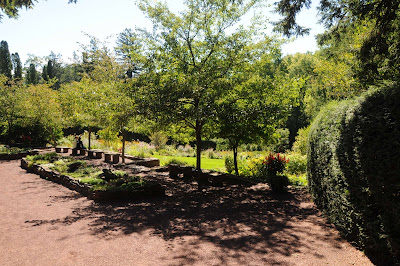 My memories are soley of this grassy area, which is surrounded by garden beds. They were full of daffodils and irises and crocii. Today's trip was much different. To begin with, it is nearly autumn, so if anything was blooming, it wouldn't be daffodils et al. 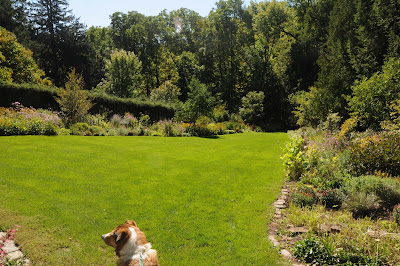 Beyond the grassy lawn are the woodland trails. I have no recollection of these, but my mother remembers walking along here. 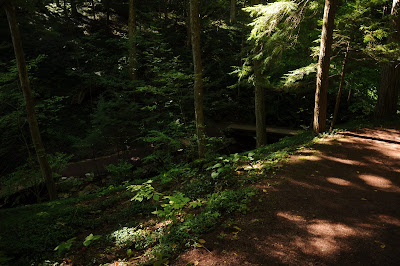 There's a gully at the bottom, lined with rocks - a man-made, or at least man-maintained, ravine - with bridges crisscrossing the water's course. 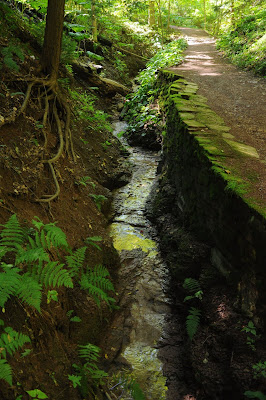 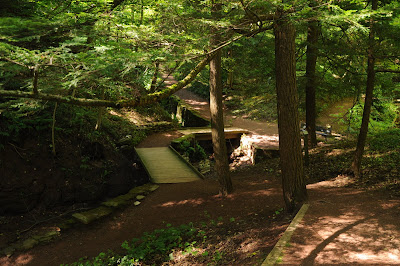 As an arboretum, several of the tree species are labeled, like this ginko. It must've been an old specimen, for the tree had fair girth and the leaves were waaay up high. I love ginko leaves, so I was sorry that the leaves were really too far out of reach to enjoy. 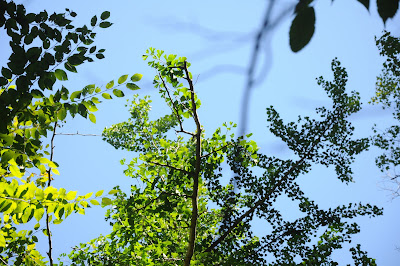 This Asian "temple" was hidden away off to the side of the trail. 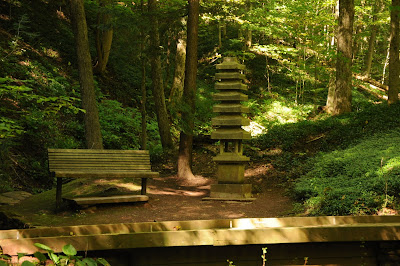 The plants that totally intrigued me were labeled as the Butterbur Grove. 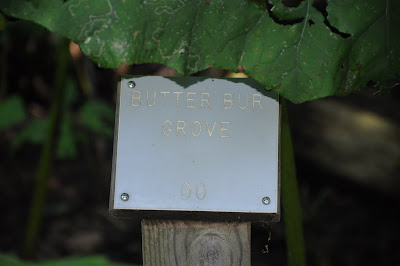 I thought they were giant mayapples. As you can see, thanks to Mom's modeling, they were huge. 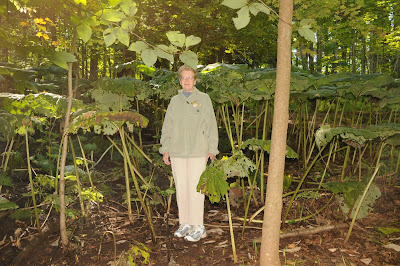 Butterbur (Petasites hybridus) is a plant that has been touted for centuries for its medicinal values. According to Culpepper (English botanist, herbalist, physician in the 1600s): 'It is a great strengthener of the heart and cheerer of the vital spirits: . . . if the powder thereof be taken in wine, it also resisteth the force of any other poison . . . the decoction of the root in wine is singularly good for those that wheeze much or are shortwinded.... The powder of the root taketh away all spots and blemishes of the skin.'

And Gerard (another English herbalist, who preceded Culpepper in the 1600s) wrote: 'The roots dried and beaten to powder and drunke in wine is a soveraigne medicine against the plague and pestilent fevers, because it provoketh sweat and driveth from the heart all venim and evill heate; it killeth worms. The powder of the roots cureth all naughty filthy ulcers, if it be strewed therein.'

According to The Modern Herbal, today "butterbur root is medicinally employed as a heart stimulant, acting both as a cardiac tonic and also as a diuretic. It has been in use as a remedy in fevers, asthma, colds and urinary complaints, a decoction being taken warm in wineglassful doses, frequently repeated. "

The substantial leaves (I still can't get over the size) used to be used to wrap butter when the weather was warm, hence the common name butterbur. 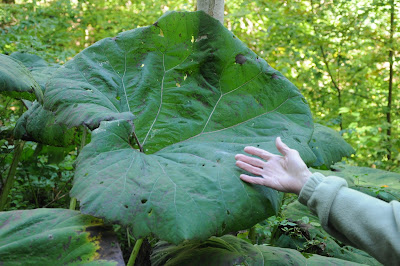 The plant shares a lot in common with coltsfoot, including the shape of the leaves and its predilection for blooming before the leaves emerge in the spring.

We didn't see the flowers (wrong season), but from what I've seen on the Internet, they are rather interesting. This might just warrant a return visit in the spring. 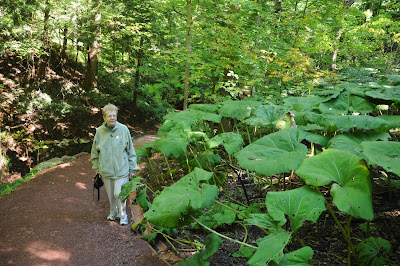 We also saw a lot of horse balm, which I was able to recognize thanks to my friend Jackie who showed me this plant at Orra Phelps' preserve. 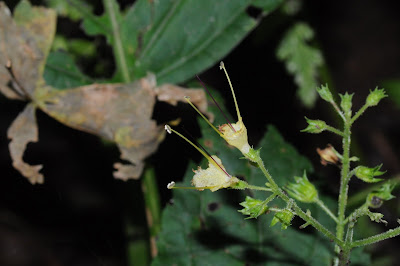 A couple of folks have asked me about the habitat preferences of yellow and orange jewelweed. A sort of informal theory was in play, with the thought being that orange jewelweed preferred wooded habitats, while the yellow preferred open spaces. Well, here in the woods we found plenty of the yellow variety. 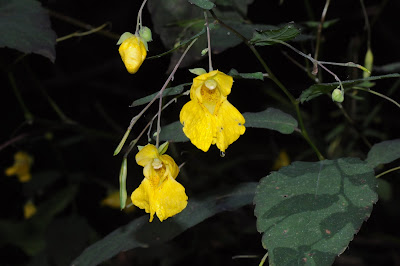 I also saw some orange growing along the open, sunny roadsides near my parents' house. So much for that theory, eh? Based on my informal observations, there doesn't seem to be a shade preference for these two plants. Perhaps there is a soil preference.

We saw lots of white snakeroot (Ageratina altissima) in bloom, too. 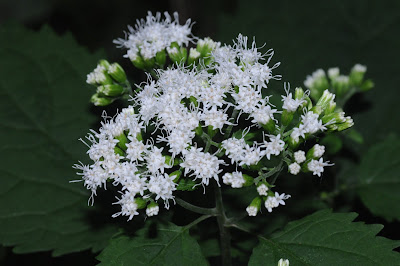 Like the butterbur, I was equally fascinated by the water control system the college has all along the trails. 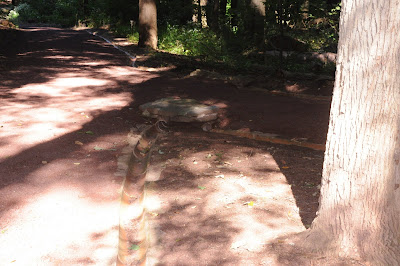 Clay (?) gutters line the trails, funneling the water into the stream at the bottom of the ravine. 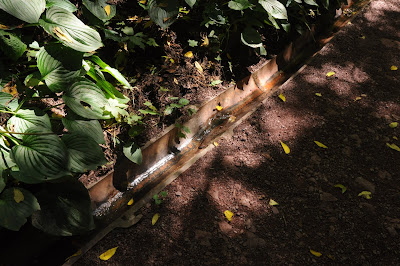 We found some lovely pink turtleheads in bloom in the formal gardens. 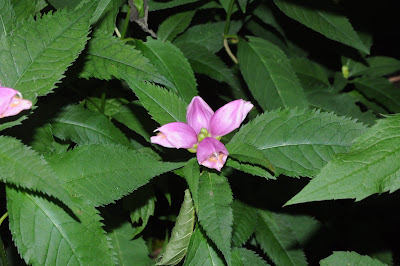 And corralled behind a fence, so it wouldn't get away, was this very large Norway spruce. 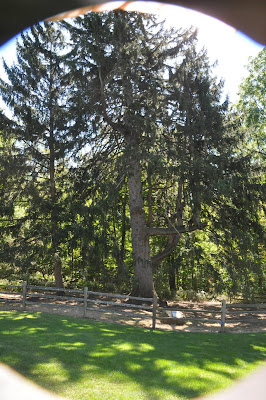 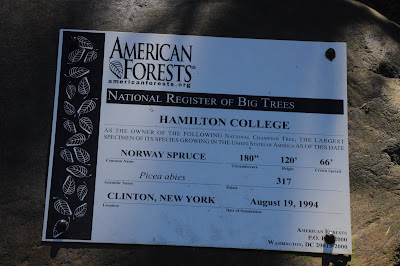 Upon leaving the Root Glen, we grabbed a bite to eat in Clinton, enjoying our nosh at an outside table of a small bistro. Then it was back home to drop off leftovers. Off we went again, to the apple orchards near LaFayette. It seems EVERYONE went to the orchards that afternoon, for the places were packed! So, I left Toby in the car while we made a quick dash in to grab some apples and squash - it was too crowded to pick our own.

On the way home we stopped at a farmer's market in Cazenovia, and watched a really long limo made a really narrow turn into a park where a wedding was in progress.

All in all, it was a nearly perfect almost-autumn day in Central New York.
Posted by Ellen Rathbone at 12:33 PM