Saturday I woke with the urge to drive to Vermont. I was on a mission. Ten years ago I was the Program Director at Merck Forest and Farmland Center in Rupert, VT. While there I began working on an Interpretive Master Plan, an effort to record all the assets of and develop an interpretive outline for the facility. I did not have a digital camera (only the really wealthy photograhers could afford those), and things like flashdrives did not exist, so I have no record of the interpretive materials I developed. I wanted to go back to get photos of my work to add to my portfolio - all the better to find a job with, eh?

So, after walking the dog, I headed eastward. 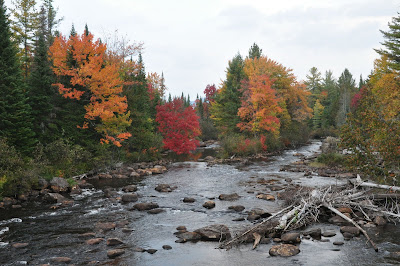 The colors are just about at peak here in the central part of the Park. 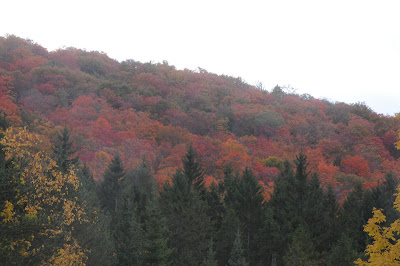 As I drove out of the mountains, though, the colors reverted to green.

It's about a two and a half hour drive to MF&FC, and it was a lovely day for it. When I pulled in to the parking lot, at the end of a very long dirt road up the side of a mountain, I found the place was hopping. Lots of folks were out taking advantage of this sunny fall day, despite the strong wind.

The first thing that caught my eye was this sign along the Discovery Trail - a short little woodland trail perfect for young families. When I was here, we commissioned a beautiful carved wooden sign with a ruffed grouse on it. That sign is apparently history - replaced by this smaller painted sign. I wonder what happened to the other one... 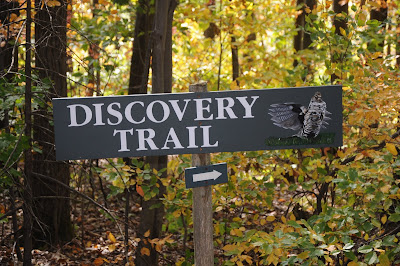 Apparently it was a good pumpkin year on the farm. They had brought down their pumpkins and displayed them in the woods here - an eye-catching arrangement. 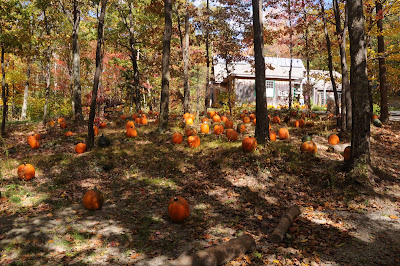 But I was on a mission, so I immediately headed down the farm road toward the farm. I was surprised this tree was still standing - it was a popular photographic opportunity (usually with the family's children standing inside) when I worked here. 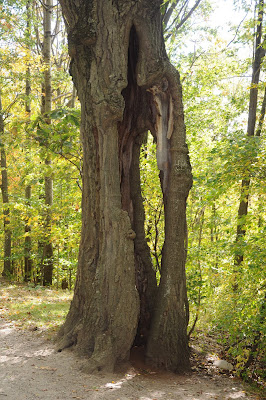 The chickens were very friendly. As soon as I turned up, they trotted right over to check me out. 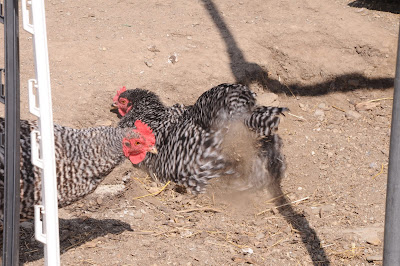 My primary reason for this trip was to photograph the following signs. These were the interpretive signs I designed while I was on staff. I had a new camera (a Pentax SLR - bought the trip I made to Peru in January 2000), so I was a picture-taking fool while I was here. The best of my shots from around the farm were used for the background graphics of the farm's signs. While a few of the signs remain out on the farm, most were stashed away in the hay barn, in various states of disrepair. Trent, who currently works on the farm, was very helpful in tracking them down so I could record them. 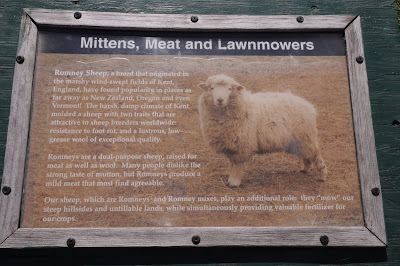 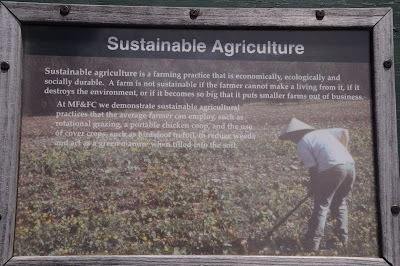 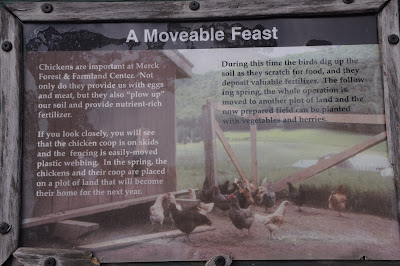 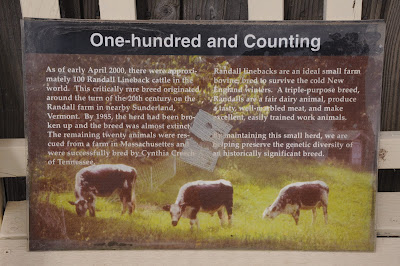 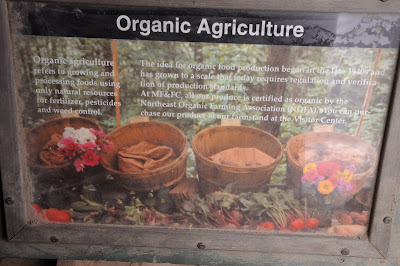 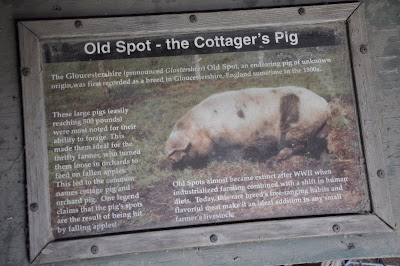 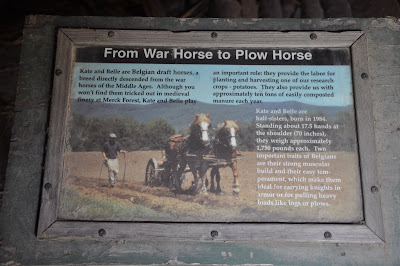 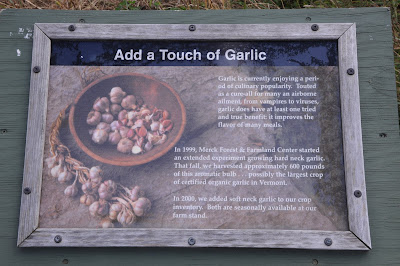 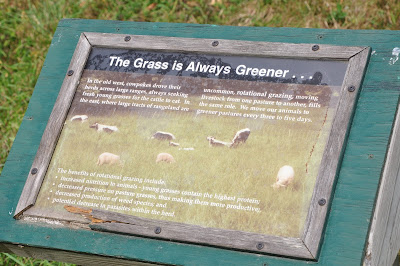 It was kind of sad to see how the place has changed since I was there. It used to raise rare breeds of livestock (Randall blue lineback cattle, Gloucestershire Old Spot pigs, some rare chickens and turkeys, and Suffolk Punch horses). The horses were used to plow the fields, plant the spuds, and harvest some of the crops. Today machinery is used instead.

Back in the day, the farm had extensive fields of crops, mostly potatoes and garlic. Most of these crop fields are now fallow - full of mustard and other weeds.

The moveable chicken coop (the third sign above) has been replaced with two permanent chicken houses. The chickens are free range now, but the benefits of the portable coop are lost.

This mostly brown caterpillar was cruising across the road. Well, it was trying to cruise along...the wind was so strong that the poor thing kept getting blown over! 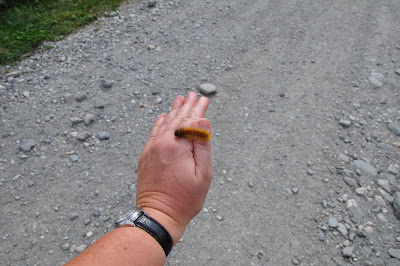 Apparently these days they purchase their piglets rather than breeding them on-site. Another change. 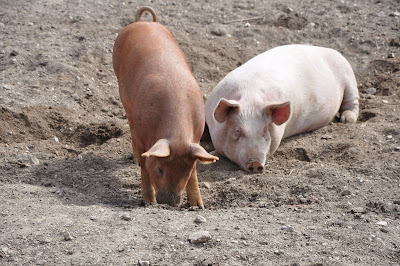 Despite the changes and the gale force winds (the farm gets most of its electricity from a small wind turbine that was erected while I was on the staff), MF&FC is a lovely place, especially in the fall. 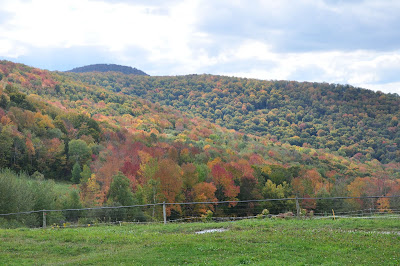 Advertisement: MF&FC is a wonderful hiking destination, with several miles of trails. They also have cabins they rent out for overnight stays. Some of the cabins are very rustic, while others are bright and cozy. MF&FC also sells their organic produce and grassfed meats. Maple sugaring is one of their one-going projects - they have lots of syrup for sale in the visitor center, as well as sheep skins and yarn from their sheep. It's a beautiful place and well worth a visit, whether for a day or a week.
Posted by Ellen Rathbone at 3:24 PM

Email ThisBlogThis!Share to TwitterShare to FacebookShare to Pinterest
Labels: travel