Can One Have Too Many Books?

No, I don't think so.  Those who help me move, however, may beg to differ!

Anywho - when I saw this book for sale (and having some unknown skulls on my desk), well, you can only imagine - I HAD to have it! 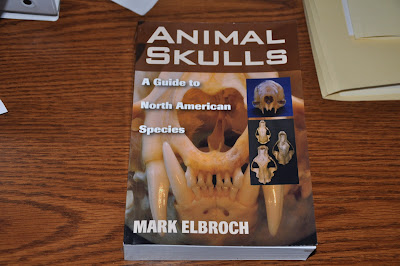 I have several (okay, two other) of Mark's books - they are terrific for the tracker and outdoor enthusiast.  I highly recommend his Mammal Tracks and Signs, and his Bird Tracks and Signs.  Also in the series, but written by different authors, is Tracks and Signs of Insects and Other Invertebrates.

But, back to the book at hand.  When I took mammology in college, we had a spiral-bound book on skull ID (it's packed in a box somewhere).  I have also added one or two other skull and bone ID books to my collection, but they are really written for scientists, not for the lay person.  What Mark does in his book here is really explain the parts of the skull (and all the jargon that goes with it) so the layperson can understand what is what. 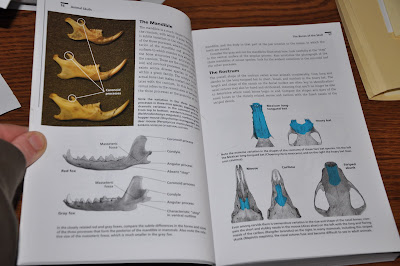 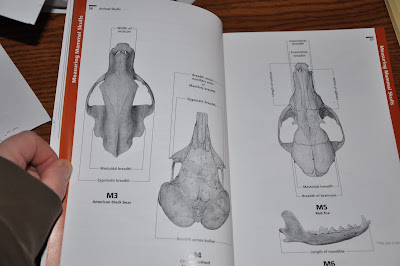 And after all the lessons, there is the rest of the book, full of species accounts.  GREAT information, easily read, easy to use. 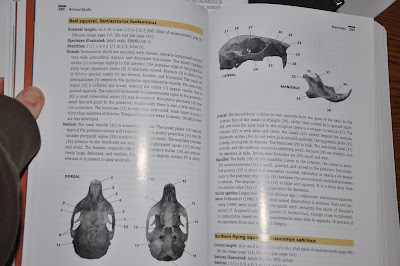 I immediately applied it to identifying the mystery skulls on my desk earlier in the week (a raccoon, a fox squirrel and an eastern cottontail, the latter of which I should've known had I actually looked at the teeth).  So, when we found the following skull on the prairie yesterday morning, I was pretty sure I knew what it was.  Never the less, I took several photos of all aspects just to be sure when I got back to the office and could check it with The Book.

First, it is a medium-sized skull, so that rules out all the small animals (local snakes, frogs, mice, squirrels, rabbits, sparrows...). 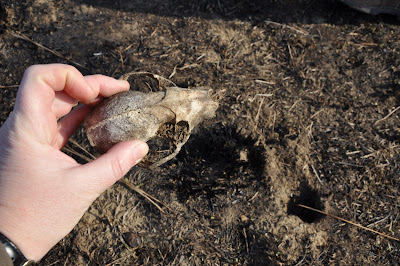 It has teeth, ruling out birds.  It has prominent canines, and no bright orange incisors, ruling out rodents of any kind.  With pointy teeth like these, we know we have a predator.  Could that be fox?  Coyote?  Cat?  Raccoon?  Opossum? 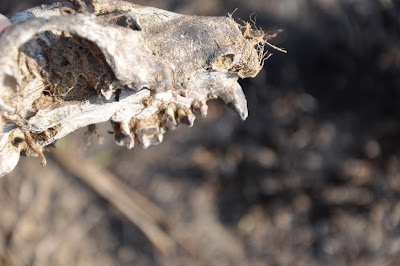 I knew from reading Mark's book that opossums have fairly uniform teeth - not much variation (canines, molars, etc.).  I also knew from previous experience that they have the most teeth of any land mammal in North America.   This skull, even taking into account the missing teeth, didn't have a lot of teeth, and they were quite varied - not an opossum. 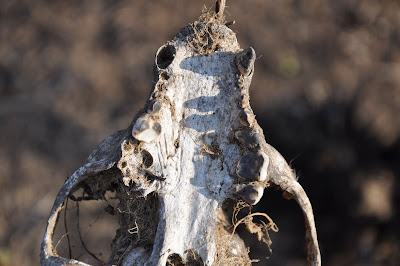 Canines tend to have rather long snouts - their sense of smell is pretty dominant.  This animal's snout was rather short, so that ruled out foxes and coyotes. 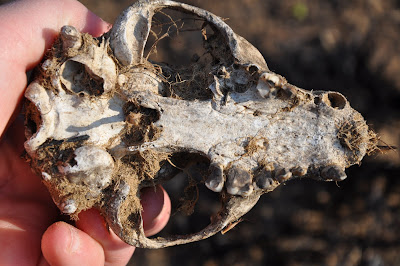 The well-defined ridges on the top and back of the skull, while not completely diagnostic, were helpful clues... 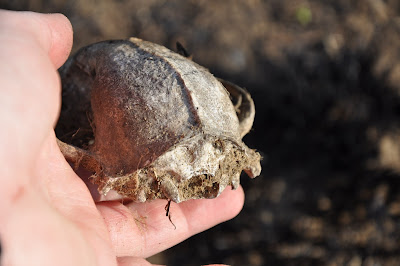 ...as were the protrusions (called postorbital procseses) above the eye sockets ( frontal) and from the cheekbones (zygomatic). 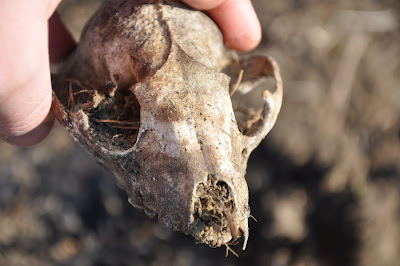 What we had here was a raccoon.  My coworker was happy to know this - raccoons are not well thought of in these here parts.  I guess, like the deer, their population is rather robust, making them somewhat numerous and troublesome.  Still, as long as they stay in their place, I rather like raccoons.  They have delightfully clever "hands" and curious personalities.  And baby raccoons are downright cute, although they can easily get into trouble - just ask any wildlife rehabber who has had a bunch of them in his/her care.
Posted by Ellen Rathbone at 10:09 AM