Saturday afternoon I had an email from my friend Kat asking if I wanted to join her and some friends for a paddle Sunday morning on the River Raisin.  It was going to be a beautiful day, so how could I refuse?  9:30 Sunday morning found me hoisting the Spitfire onto the Prius and then driving over to Sharon Mills to meet the group. 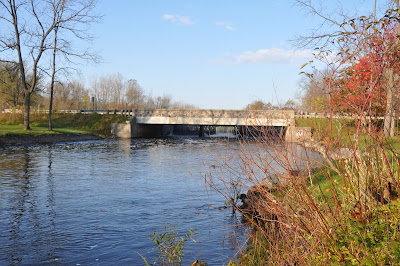 When I was here a couple weeks ago, I visited the mill and walked along a trail upstream of the dam.  Today we were putting in below the dam and our destination was Manchester, about a two-hour paddle away.

The put-in is quite nice - steps and all! 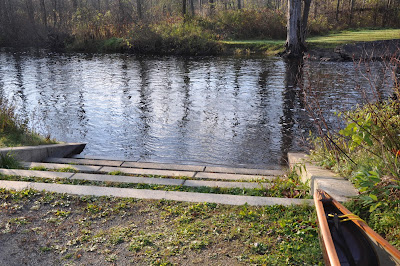 And we even start out with an interpretive sign, which tells us a bit about the River Raisin and the wildlife we might encounter along the way. 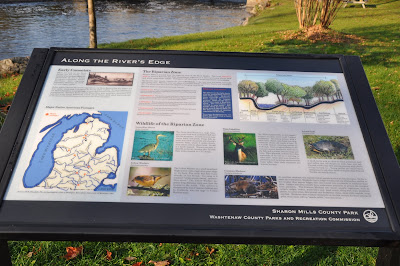 We ended up with about eight boats, most solo, but a couple had two paddlers.  And one dog - Ernie. 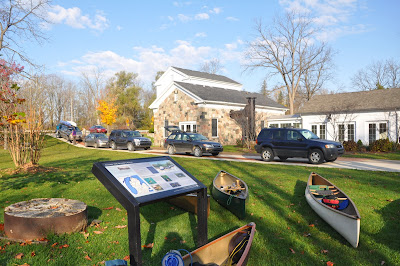 The sun was just getting going as we launched, the trees still casting some pretty dark shadows. 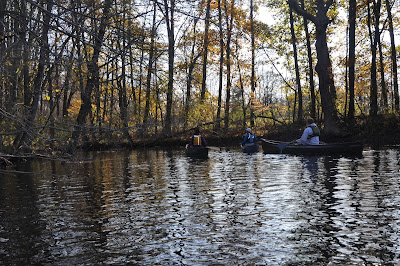 It wasn't long, however, before the sun was high enough to brighten up the whole river.  Having few leaves left on the trees helped. 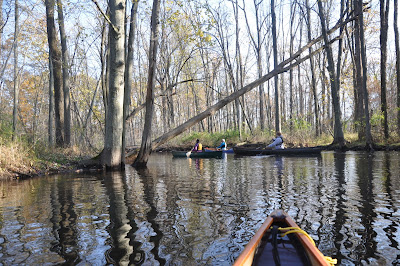 This stretch of the River Raisin is really quite nice.  I'd even say it's almost as nice as that stretch of the Kalamazoo I fell in love with this summer.  There is a lot of deadfall, though, so maneuvering skills are definitely a plus. 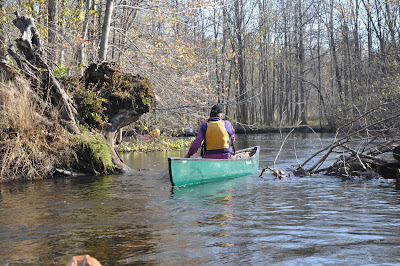 We were very lucky that there was only one spot where we had to get out of our boats.  Most of the group followed Ben's lead (below) and exited on the offending log, dragging their boats across and then relaunching.  Three of us, however, took the safer route and disembarked along the shore, schlepped our boats through the briars, and then re-entered the water.  Kayaks and Spitfires do not lend themselves well to easy egress. 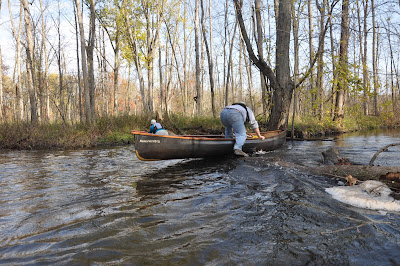 The first, oh, two thirds of the trip goes through some pretty flat land, nicely forested on both sides.  The current is pretty steady, so one really needs to pay attention, especially with all the trees across the water. 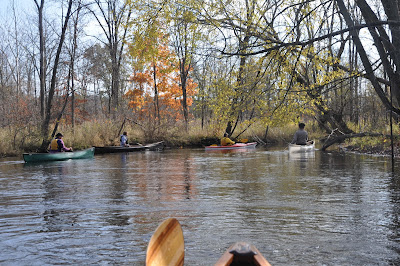 We passed under one bridge - I wonder where this road is.  Hm. 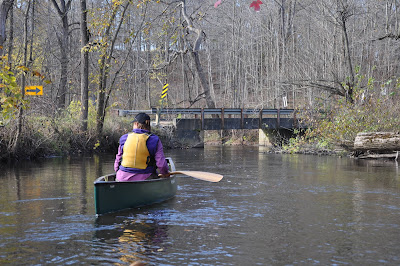 Historically, this part of Michigan had a lot of white pines.  There aren't too many around these days, at least not that I've seen, but here we have a small stand.  I was so impressed I had to take their photo! 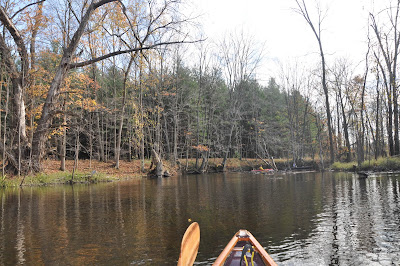 Some deadfalls we were able to paddle under, but most required some fancy paddle work to weave through without getting hung up on a submerged limb or trunk, or having the current swing your stern into the next branch before you got your bow aimed around it. 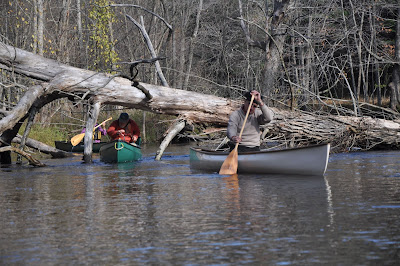 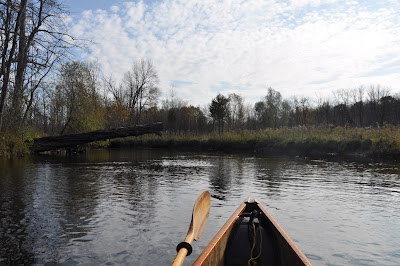 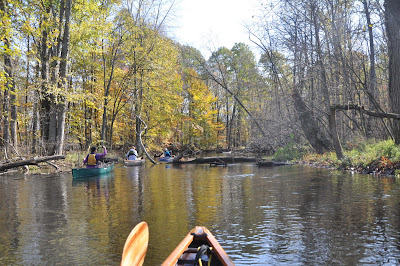 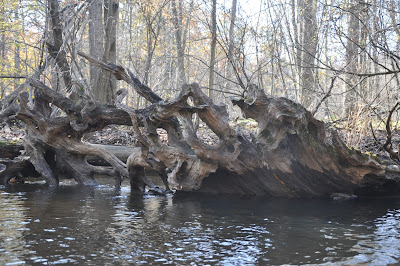 It's a good thing the water wasn't any higher than it was.  There were four culverts here, and only the one on the far left had enough room for us to glide through. 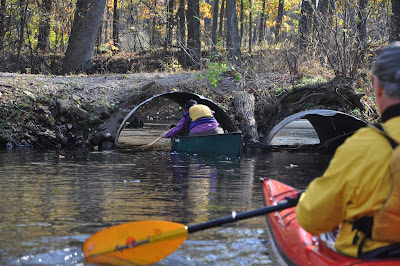 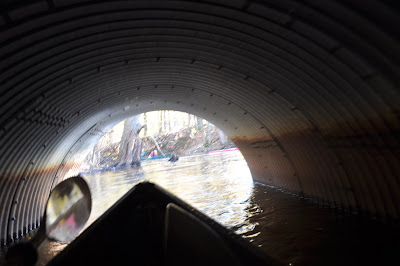 And then we were in forest that had some topography.  Banks! 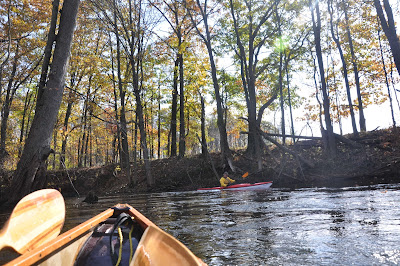 Some of the maples still have a bit of color in their remaining leaves, but for the most part the recent winds and rains have stripped the leaves from the trees.  Oaks are still holding on to their leaves, but that's normal:  they'll still have them come March. 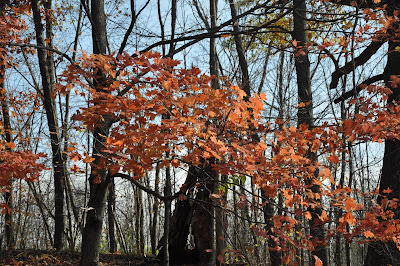 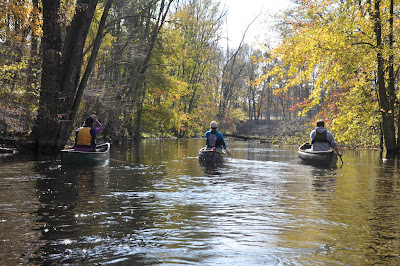 This one bank, which had a LOT of erosion, also had some interesting holes.  I'm thinking these might be kingfisher nests.  I will be consulting with our resident birder to be sure, however. 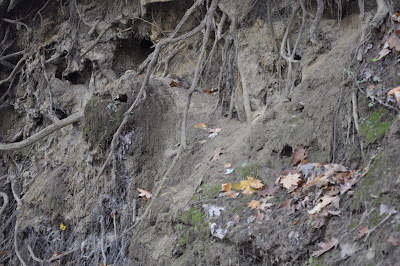 The day was just cool enough that we were comfortable leaving our sweaters and  hats on, but warm enough that no one got a chill.  Perfect paddling weather. 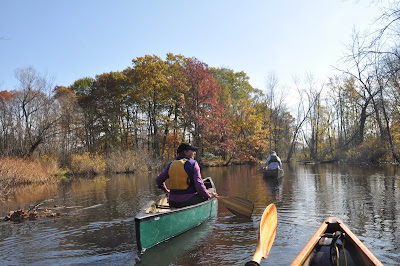 About two hours after we launched, we were returning to civilization.  I put my camera away a bit too early - I thought we were at the end, but we still had another 20 minutes or so to go, through some lovely riverside neighborhoods. 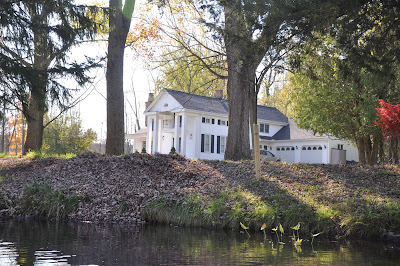 As we hauled out our boats above the bridge in Manchester, we listened to various sirens and church bells.  At first we thought it was the noon signal, but then we saw a rescue truck go by - hopefully it wasn't anything major.  One of our group passed around some homemade brownies as our boats were placed on carriers and tied down, and six of us went for lunch at the Black Sheep Tavern (good food, great prices).  It was after 3:00 when we all finally parted ways.
I'd recommend this stretch of the River Raisin to anyone looking for a nice paddle that isn't too difficult, but does require a little paddling knowledge.  Thanks, Kat, for asking me along!
Posted by Ellen Rathbone at 1:42 PM